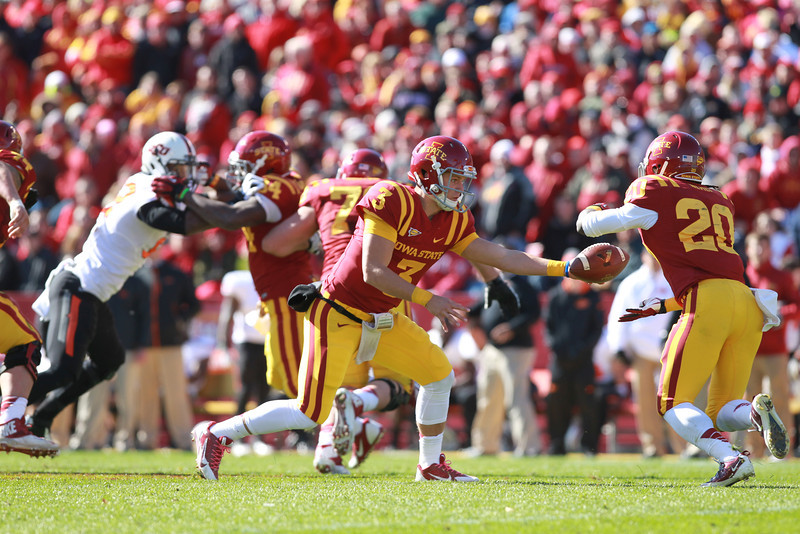 Well, that was fun for a little bit at least.

Iowa State had a 10-3 lead over Oklahoma with fewer than three minutes to play in the first half on Saturday. That’s when Jalen Sanders returned a Kirby Van Der Kamp punt for a 91-yard touchdown. After that, this thing was over.

The Cyclones out-gained Oklahoma in the first half but once the third quarter kicked off this game wasn’t even close. The Sooners ripped open 69 and 63-yard touchdown runs in the third quarter alone, scored 45 unanswered points to end the game and handed Iowa State its ninth loss of the season by a 48-10 final.

The final numbers show that Oklahoma out-gained the Cyclones 523 to 291. Iowa State only mustered up 103 yards in the second half.

Iowa State will host Kansas, who won its first league game in 27 tries on Saturday over West Virginia, next Saturday evening at 7 p.m.

“Maybe, just maybe, this would be 2013’s version of the ‘Paul Rhoads Special,’” I thought. Of course, I was wrong but Iowa State really did impress me in the first half of the 48-10 blowout. The Cyclones were inspired. The Cyclones executed properly on both sides of the ball.

Then Barney Cotton apparently started calling plays (a series more conservative than Sarah Palin) at the end to the first half, Oklahoma housed a punt return and the rest was history.

In the second half, the deflated Cyclones were simply out-classed by a much better football team. The better team won this game and frankly, if you entered Saturday expecting an Iowa State victory, you’re delusional. I highly doubt that many folks reading this expected that though so that is a good thing – you indeed are not delusional

Anyway, here are a few additional musings on the loss…

*** He was not accurate. His pocket presence was not a thing of beauty. He took five sacks; some were on him, others on the line and good coverage. Even so, somehow, that was probably Grant Rohach’s best game of the season. The redshirt freshman completed 21-of-34 passes. The fact that I think that was his best game of the year really says something about how bad this offense has been.

Sam Richardson only attempted two passes on the day. The sophomore has to be injured (thumb) worse than any of us know about. I find it hard to imagine that if Richardson and Rohach were both healthy, that Rohach would be “the guy.”

*** Paul Rhaods said earlier this week to expect a four-man quarterback competition this spring. Fine. But if Iowa State doesn’t find “a guy” at quarterback, then this program will never reach that next level. The offensive line wasn’t the problem today. Some accuracy out of the quarterback position would go a long way. I am now done playing Captain Obvious. This is Football 101.

*** Iowa State held Oklahoma to 25 yards in the first quarter on Saturday. Iowa State actually out-gained the Sooners in the first half. You would have never guessed those stats had you just started watching this game in the third quarter though. The most glaring stat of this game: Oklahoma averaged 9.2 yards per carry on Saturday. 9.2! That’s almost a first down, per rush folks. That stat alone just might make it impossible for any team to win a football game.

*** After the game, the Ames Tribune reported that wide receiver Albert Gary is out for the season with a broken collarbone.