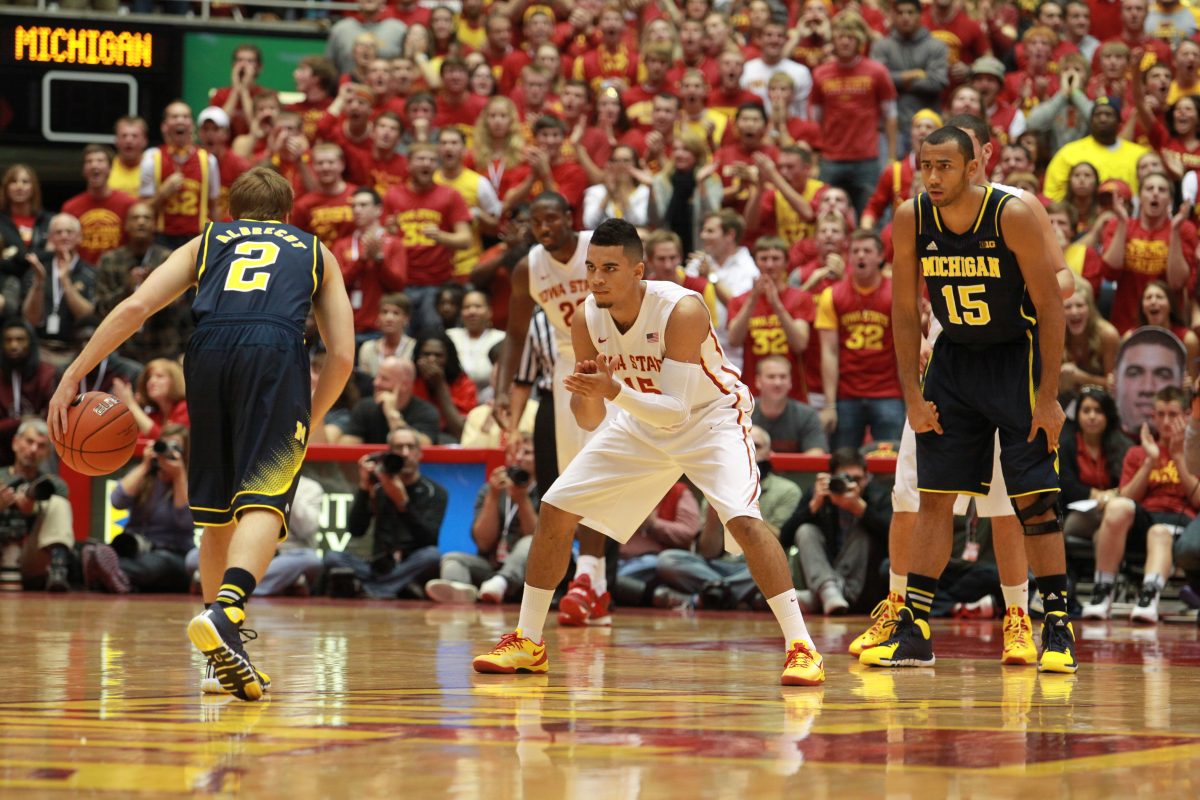 AMES — Melvin Ejim’s performance was legendary. DeAndre Kane stuffed the stat book with 13, six and five. Georges Niang was money when it mattered the most. But what about Naz Long’s 4-for-6 outing from 3-point range in Iowa State’s 77-70 Sunday matinee win over 7th-ranked Michigan?

“He is kind of the forgotten guy in this game,” Iowa State coach Fred Hoiberg said after the big win. “He was the one out there knocking down shots.”

Long has now converted on 13 of his 20 3-point attempts on the season and was second to only Ejim in scoring with 16 in the Cyclone victory. Take Ejim out of the equation and Long, who barley played as a freshman, is Iowa State’s leading scorer three games into the season averaging 15.7 per contest.

“We ran a play for him coming off of the curl trying to get him a big three that he hit,” Hoiberg said. “Then he did his best Tyrus (McGee) impression on that next one and missed the basket by six-feet. To go out there and score 16 points in that game, I’ll say that the Canadians (Long and Ejim) were pretty darn good tonight.”

Hoiberg has referred to Long as the best perimeter defender on Iowa State’s roster multiple times. Long played 30 minutes in the win. With Ejim back in the mix, Long could be exiting the starting lineup in the very near future.

If he indeed becomes Iowa State’s sixth-man and keeps making threes at this rate, the Tyrus McGee comparisons are just around the corner.

Other than Long, there might not be a bigger surprise so far on Iowa State’s roster so far this season than Dustin Hogue.

When he signed with Iowa State out of Indian Hills Community College last fall, all we heard was that Hogue is a rebounder and a defender. But every time that the junior touched the ball on Sunday, he was confident and aggressive. Hogue’s 12-point, 10-rebound performance impressed caught the eye of his mentor, Ejim.

“I am a little annoyed with Dustin,” Ejim joked after the game. “He stole a rebound from me but it’s okay because he got it. Dustin is great. He just works hard. He goes in and has a knack for rebounding and he gets there. He is actually shooting the ball really well and attacking.”

Hogue is averaging a team-high 9.0 rebounds per game (Ejim is averaging that as well but has only played one game) so far this season in addition to 11.7 points.

*** Live and die by the three huh? Well, not really. The Cyclones only made six threes (6-for-20) in the win. This is one of the many reasons why these Cyclones should only get better from here.

“I think we can get better,” Hoiberg said. “I thought that we missed an awful lot of good looks early in that game. We had some wide-open shots that just didn’t fall for us.”

“He’s going to have a chance to play at the next level because of that warrior mentality,” Hoiberg said. “You see a lot of guys who have made it at that size because they can rebound. That’s one stat that always will translate to the next level, is rebounding.”