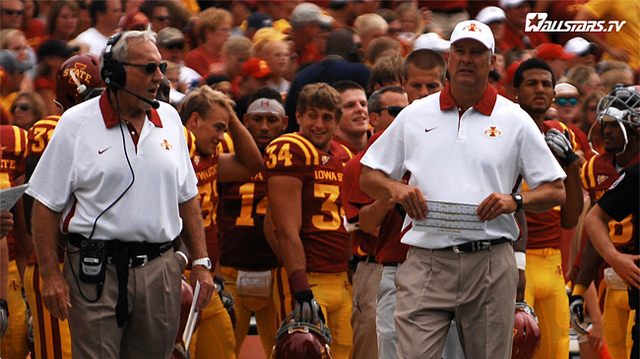 During his weekly Monday press conference, Iowa State head coach Paul Rhoads raised eyebrows when he said that his 2014 recruiting class would “probably” feature more junior college prospects than any he has brought to Iowa State since taking the job in 2009.

That is interesting because as of now, Iowa State has 15 known verbal commitments in the class and none of them are coming from the JUCO ranks.

Iowa State did however host seven official visitors for last Saturday’s 34-0 win over Kansas. Six of those prospects were from the junior colleges. Of those six JUCO prospects, three were safeties, two were defensive linemen and one was a linebacker.

When you put all of the pieces of this puzzle together, it is obvious that the rest of Iowa State’s 2014 recruiting class will likely be heavy on defense with a preference towards JUCO’s.

“With injuries, with depth changes, with some position changes, we’ve got some holes there that we want to fill and as you stack your classes with juniors, seniors and sophomores, we feel we have got to get that accomplished,” Rhoads said. “The defensive front right now – we are finishing up there. We are looking for a linebacker. We are looking for secondary members as well.”

Rhoads also noted that the class would “roughly” end up at around 20 members depending on multiple variables from injuries to transfers.

*** One young linebacker on Iowa State’s roster has stood out to both defensive coordinator Wally Burnham and the Big 12’s leading tackler Jeremiah George.

“I am excited to see what Brian Mills can do,” George said. “He has a bigger body but he is fast. He is shaped a little differently than what you want your linebacker to be but he has got good football instincts. I am glad that we have a guy like that in our program because I think he can make a big impact in the future.”

“Brian Mills, a weakside linebacker on the developmental squad, I think is going to be a pretty good linebacker around here,” Burnham said.

*** Freshman linebacker Alton Meeks almost played this season but the coaches backed out on that after the first few weeks. It sounds like that was a good thing too.

“Alton had to become a defensive mentality guy,” Burnham said. “He had never played defense.”

Meeks was a standout quarterback in high school.

“It is 100 percent of a change in attitude of what he has to do,” Burnham said. “The tenacity and it takes lots more energy to play defense I think than it does offense. He has had to go through a transformation and it hasn’t been easy.”

*** True freshman cornerback Nigel Tribune made a couple of big plays last Saturday night against the Jayhawks. Paul Rhoads had an interesting conversation with the youngster last week. 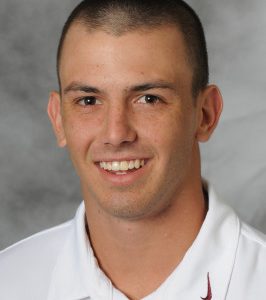