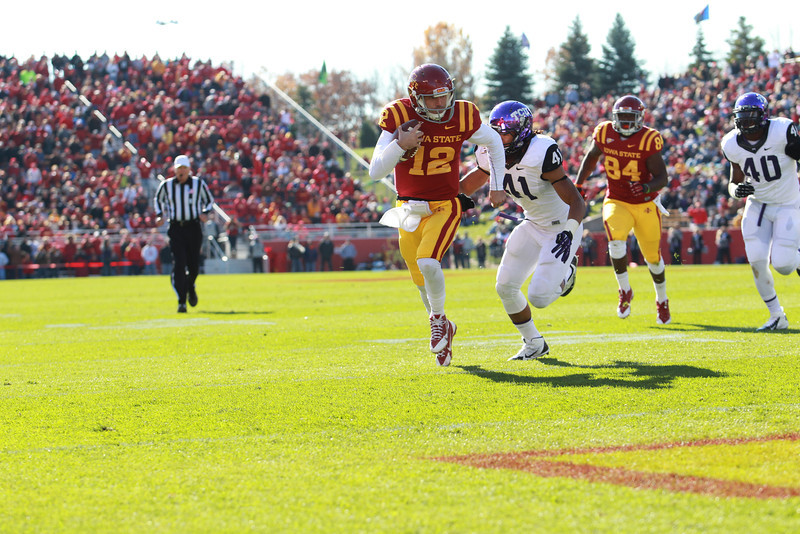 Read more of Kirk Haaland’s work over at enCYCLONEpedia.com.

Me sitting here and stating that the Iowa State offense has been bad this year falls in to the category of, “things that need not be said.” Kind of like, Chris Williams likes his Busch Lite, Adam Gray hates refs—Brent Blum loves them, or Fred Hoiberg sure is dreamy.

But here I am saying it anyway, in part because I did want to investigate one particularly unsettling aspect with the Cyclone offense this week. If you listen to Chris Williams at all—and we all do—it has seemingly been every week of the football season that he has mentioned the need for Iowa State to get off to a fast start. Get some points up early. The problem has been the rarity of that occurrence.

I first dug into it last week when Blum mentioned on Twitter that Iowa State had yet to score at all on their opening offensive drive of any game this season. What I found was kind of gross and it has now been updated to reflect this past Saturday’s game with TCU; Iowa State has gained more than nine yards on just two of their nine opening drives this season (gained 48 yards in the opening drive against UNI before missing the field goal and 44 yards versus Kansas State before turning it over on downs). The other seven games found the Cyclone offense opening with fewer than nine yards and a punt.

Okay, so that isn’t good. We know about ISU’s tiny margin for error and the need to get out to a lead to give the defense a chance and just to be in games and that clearly is not it. Unfortunately it does not end there.

But, it gets worse, because not moving the ball is one thing but not scoring is the real problem. If you read much of what I write or calculate you may already know that the Cyclones score touchdowns on just 17.9 percent of their possessions which is 106th in the country, maybe not as bad as it seems while still being terrible?

So let’s look at the scoring numbers for the offense by quarter, first with field goals only: What this chart is showing you is the percentage of possessions by quarter that ended with a made field goal. The blue line shows how ISU has fared in each quarter, the red line shows how they have fared overall, the green line is every other FBS team by quarter, and the purple line is every other FBS team overall. Obviously the Cyclones are being outpaced in this regard.

But, it is worth mentioning that a team could have a fine offense and not kick many field goals because they are so busy scoring touchdowns. So, let’s have a look: First, note the overall comparison of percentage of possessions with a touchdown and that Iowa State chimes in at 17.9 percent while the rest of FBS has an average of 26.9 percent. That is a problem.

Now for the first quarter, the rest of FBS actually averages above the standard line up at 28.5 percent while the Cyclones are way, way below their own standard at 10 percent. The good news is the relative spike in the second quarter for Iowa State but that good is quickly turned to bad in the third quarter. Much like the importance of the first five minutes in the second half of a basketball game, putting points on the board in the third quarter to define how the game will unroll is crucial. In the third quarter though, the Cyclones score touchdowns on 13.8 percent of possessions.

Yes the offense has been painful, you don’t need me or charts to tell you that but one of the biggest problems with the offense has been putting points on the board early. That would not only help out their cause but also allow the defense to play with a lead and help the entire team. Maybe it would provide a morale boost as a nice bonus.