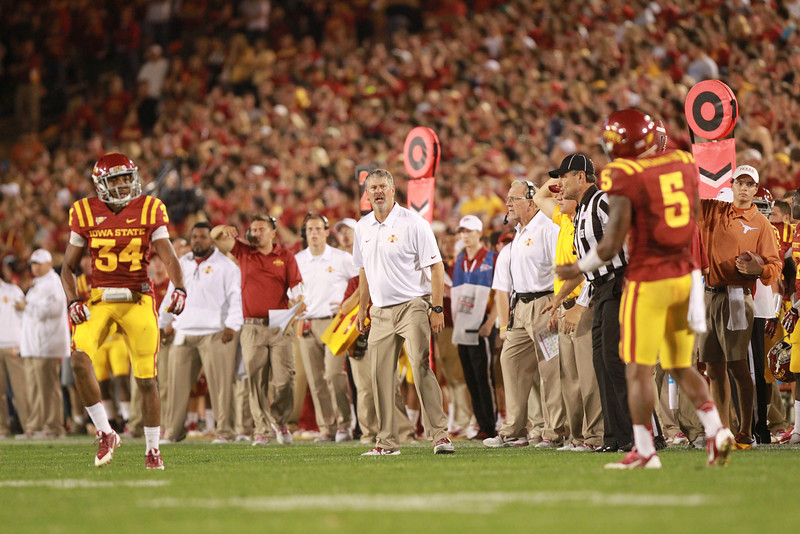 AMES — In life, hard times seem to bring out the best in people. Over the last four days, I’ve seen that within Iowa State’s fan base.

Two weeks ago, our forums were littered with antagonism and bitterness. An 0-2 start with losses to two in-state rivals seems to bring out the worst in folks posting behind anonymous screen names. But after last Thursday’s 31-30 paralyzing loss to Texas, you all appear to have come together – for now at least.

For the most part, you’ve let offensive coordinator Courtney Messingham off of the hook (it’s amazing what a running game does huh?). The doomsday 0-12 chatter is now a thing of the past. Yes, you now still believe that Wally Burnham still indeed has “it.”

Along with better results on the field, I credit Paul Rhoads’ fiery postgame speech for the majority of this.

Immediately following Thursday night’s game, instead of discussing if Iowa State was wrong by kicking a field goal with under five minutes to play, the dropped interceptions or other spots where the Cyclones could have been better, the direction that most callers wanted to go on the Cyclone Radio Network’s postgame show, Cyclone Reaction, was the showing of support for Rhoads and his program. We didn’t even take many, “the refs screwed us” calls. It was more, “Man, that guy is awesome and we’re proud to have him as our coach,” type of stuff.

Hence why even though it was a loss, last Thursday will in fact be so good for recruiting. Beat Texas by an point and the highlights are shown on Sports Center. That passionate speech after getting hosed equaled Rhoads leading off Sports Center, an appearance on the Dan Patrick Show, Jay Mohr drooling about how awesome Paul Rhoads is and a lot more. All of that positive coverage is priceless.

And that is how I want to put a bow on the Texas game today. Moaning about the officials and the Big 12’s gutless “rulings” over the weekend won’t get anybody anywhere (although it is fun to do over Busch Lights with a buddy every now and then). But despite the loss, Rhoads’ passion has once again unified his fan base, which is more important than ever when you are 1-3 with two road games against top 25 teams on the horizon.

Iowa State will travel to Texas Tech next Saturday for an 11 a.m. kick. The Cyclones have already been tabbed as a 16-point underdog. I’m not ready to call for an upset quite yet, but this is a perfect setup for 2013’s installment of the Paul Rhoads Special. His team is down. The Cyclones are going the road. Texas Tech is an undefeated but yet very beatable opponent.

Along with Alabama, Oregon and Ohio State, Iowa State is the only other program in America to win a road game over a top 25 team in the last three seasons. On Saturday, the Cyclones will have a good opportunity to extend that streak to four.

Chalk it up right now – Texas Tech is on upset alert.

*** If Deon Broomfield would have torn his ACL on that Mike Davis cheap shot, would the Big 12 have suspended him? That’s a fair question for Iowa State to pose to Bob Bowlsby.

I have to get this off of my chest though. To the people out there who have hinted around that Rhoads’ postgame rant wasn’t “real,” you could not be more clueless. Rhoads is an emotional human being. I bet you the man cries three times a week (hyperbole alert but you get my point). Criticizing a man for being emotional is just wrong to me. That’s what I was always taught as a kid. Be who you are. You don’t have to be anything for anybody else, as long as you stay proud when you look at yourself in the mirror.

So you think Rhoads is over-the-top? Well, so are the constant digs at this man for being the person who God put him on this planet to be. You’re reaching. You know you’re reaching. Enough already.

*** Iowa State’s next opponent, Texas Tech, scored 54 unanswered points in a 54-10 route of Kansas over the weekend. I watched this game closely hoping to learn a thing or two about Tech along the way. In return, all I really got out of the contest was how bad Kansas actually is. How has Charlie Weis’ program managed to get worse over the last year? I don’t know, but it has.

*** As of Monday afternoon, Iowa State has no clue who will be playing quarterback on Saturday for Texas Tech. Baker Mayfield went down with a knee injury on Saturday and is questionable for this week. The good news for Tech is that there was no structural damage to Mayfield’s knee. Honestly though from an Iowa State perspective, does it really matter? If it’s Michael Brewer or David Webb, chances are either/or will channel his inner-John Elway when the Cyclones come to down.

*** West Virginia might not win another game this season. I sincerely mean that. Dana Holgerson very well might get Kiffin’d by the end of the year. 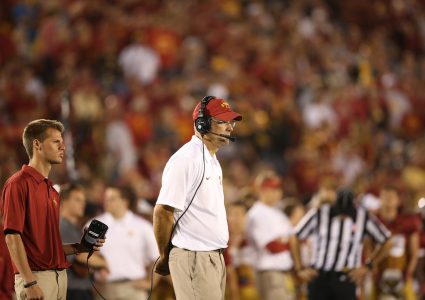 Monday Musings: State of the nation