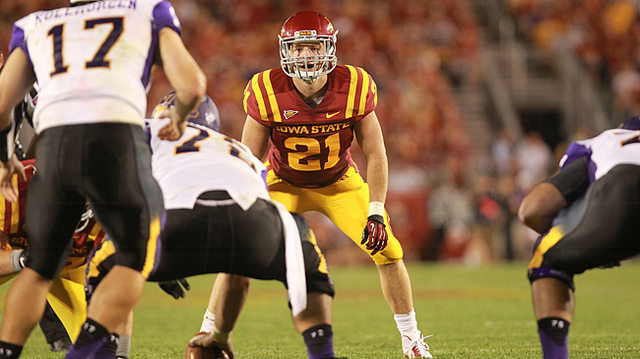 AMES — Paul Rhoads released his updated depth chart for Saturday’s date with Iowa on Monday morning. As expected, it was full of changes, specifically on defense.

NOTE: Rhoads’ weekly press conference wil begin at 11:30 today. Follow me on Twitter for updates. Of course, I’ll post a full recap on the site later this afternoon, along with Monday Musings as well.

*** The biggest changes that you’ll see revolve around two starting spots, at WILL linebacker and right cornerback.

Redshirt freshman Luke Knott will start the first game of his career on Saturday as he has beaten out junior Jevohn Miller at the position.

In a more surprising move, Rhoads has slotted sophomore Sam Richardson ahead of redshirt freshman Charlie Rogers at right cornerback. Richardson got picked on, but led Iowa State in tackles with 13 in a week one loss to UNI.

*** On Sunday, the program announced that redshirt freshman Damien Lawry had been moved from cornerback to wide receiver. Now, we know why.

True freshman Nigel Tribune is now slotted at Iowa State’s No. 2 cornerback (along with Kenneth Lynn) behind Jansen Watson on the left side.

In another offensive line note, redshirt freshman Duaron Williams has now cracked the two-deep for the first time in his career at backup SG, behind Tuftee.