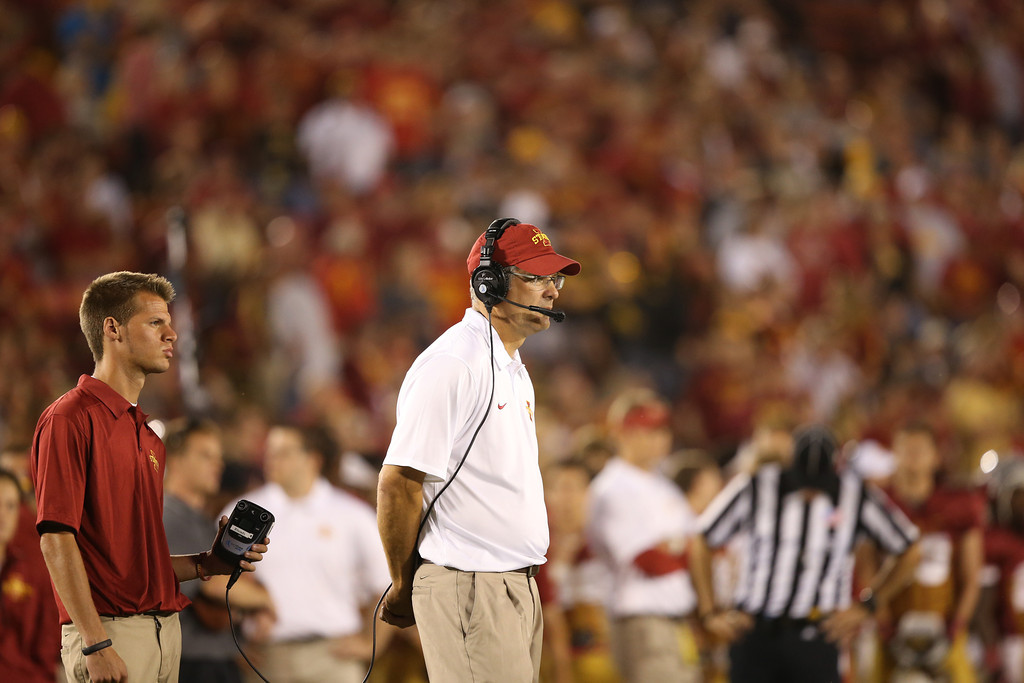 From chatting with all of you on our website, to hosting Cyclone Reaction (the Cyclone Radio Network’s postgame show), to casual conversations with family and friends, I seem to be getting asked the same question regarding Iowa State’s 0-2 start to the 2013 season over and over again.

“How does this happen in year five?”

Why are so many young guys playing?

Regardless of the coach, program or situation (most of the time at least), it is unfair to fully credit (or discredit) a new leader for his “first” recruiting class at a school. Obviously, recruiting is a 365-day per year business. Rhoads was hired by Iowa State on Dec. 20, 2008. National Signing Day is traditionally the first Wednesday in February. Rhoads had just over two months to secure and put together his “first” class and probably less than that when you consider that a new coach has to hire a staff before the recruiting process is off and running at 100 percent.

Rhoads immediately knocked two balls out of the park within that class by signing a couple of linebackers named Jake Knott and A.J. Klein. He was the first (and only) BCS level coach to offer Knott. Klein had initially committed to Gene Chizik but for the most part, Rhoads secured that class as well as anybody could have expected him to.

A quick opinion: In general, good recruiters can recruit regardless of circumstance. In fact, an argument can be made that it should be easier to recruit at the beginning of a coaching tenure. At this point, the fan base is unanimously behind you (in most cases) and while you don’t have many wins to your name, you also don’t have many losses for the opposition to point out on the trail. This is where charisma is so important and as we all know, Rhoads and his staff (that has for the most part stayed in tact) have plenty of that.

Back to the original question: Why are so many young guys playing this season for Iowa State in year five?

There is a two-part answer to this.

The first involves the natural progression of a program but at the same time, is negative. I consider the second part of the answer to be incredibly positive for the future of Iowa State football.

First, we need to properly analyze Iowa State’s “misses” on the recruiting trail early on during Rhoads’ tenure in Ames. I consider Rhoads’ first true recruiting class to be the group that signed in 2010, a unit that included names like Shontrelle Johnson, Tom Farniok and Jeremiah George.

Note: I define a “miss” as a player who never made it to campus, transferred, was dismissed from the team or never produced at a level where he could help the program once on campus.

Another Note: I am also including a group that I refer to as “tweeners,” guys who are still with the program but have yet to produce. (I am only doing this for the 2010 class as it is too early to judge the careers of anybody after that.)

A very important note to remember: Every program misses on recruits. This isn’t an exact science that we are analyzing here. It’s 18-year old kids who come from all sorts of different upbringings. No coaching staff in America is perfect when it comes to this. In fact, a lot of “misses” have nothing to do with a coaching staff at all. Injuries happen. Stuff goes down with a kid’s family that forces him to transfer. All sorts of variables play into this. Some is uncontrollable. Other aspects, like pure talent evaluation, are not.

Dentrell Pate, LB (never made it to campus)

Jon Caspers, OL (JuCo transfer who never did much)

T.J. McCullough, ATH (never made it to campus)

Jevoury Wedderburn, ATH (never made it to campus)

Matthew Thomas, CB (a RS junior who is still not on the two-deep)

Bob Graham, OL (injury plagued, but was struggling to find a spot on the depth chart)

Pierce Richardson, TE (injury plagued but has only appeared in one game since signing)

Donald Smith, LB (left campus after a month due to “homesickness”)

Collin Bevins, DT (transferred in the summer of 2013)

While I have already noted how recruiting can be an easier task early in a coaching tenure, there is also validity to the point that landing better prospects is much more doable after you’ve proven that 1) you can win and 2) you’re probably going to be around for a while.

This is why accumulating “big” wins was so important to Rhoads early on during his tenure. Going to a bowl game in year one gave Rhoads instant credibility. The Oklahoma State win in 2011 truly put his program on the map nationally. The 2012 season kept the ball rolling.

As a result, Iowa State has recruited better players later on in Rhoads’ tenure than it did during the early years and as a result, many of these guys are currently beating out members of the 2009 and 2010 classes today.

Why did Quenton Bundrage see the field at wide receiver as a redshirt freshman last season? It wasn’t because of “misses.” It’s because Bundrage was better at that age than some upperclassmen ahead of him.

The same can be said about Nigel Tribune (true freshman) and Charlie Rogers (RS freshman) at cornerback. Kenneth Lynn wasn’t a “miss.” As noted, the jury is still out on a guy like Matthew Thomas. But these rookies beat out vets to earn early playing time. That isn’t a bad thing.

Cases like the ones I outlined above have less to do with recruiting misses and more to do with improved recruiting. Because of that, the lumps that Iowa State is taking right now should pay off in years to come.

This is the very positive part of Iowa State’s youth. In theory, these guys should only get bigger, faster and better.

*** Why does Luke Knott have to start as a redshirt freshman? Why did Jared Brackens have to move to linebacker after playing safety during his first two years with the program? Why did Jeremiah George and Jevohn Miller have to see the field (primarily on special teams) as true freshmen? Six “misses” at linebacker in three years of recruiting has a lot to do with it…

And don’t look past the shape that the program was in when Rhoads got to town. This trickle-down effect is still being felt in Ames today.

Gene Chizik had established a decent base of starters but depth was a major issue, hence the reason why Jake Knott and A.J. Klein had to play as true freshmen. Had that not been the case, No. 47 and No. 20 would still be roaming Jack Trice Stadium this fall instead of standing on NFL sidelines.

*** Shaban Dika was listed as a first-string guard just this spring. When his career ended just a week later, Iowa State was already in a hole on its offensive line before the spring session had even ended. When Tom Farniok, Jamison Lalk and Ethan Tuftee are all out an with injury, that’s four starting caliber interior linemen that Iowa State was down over the span of five months, hence why the Oni Omoile’s and Daniel Burton’s of the world are playing significant minutes this season.

If you’re currently freaking out about Iowa State’s offensive line, I get it, but try to relax. Chances are, injuries are much of of an issue here than anything else.

*** The lack of numbers at defensive tackle was a major story heading into the season. Imagine what a sophomore like Quenton Pompey could have meant to this line this year, had he panned out. Collin Bevins would have provided more depth (note that I give ISU more of a pass here as defensive tackle is without question the most difficult position to recruit in all of college football). Heck, Rodney Coe and David Irving could still be defensive ends for all we know.

I am currently projecting Iowa State to return five offensive line starters (Gannon, Burton, Farniok, Lalk and Dagel) with a handful of backups who will have seen meaningful action as well when the 2014 season kicks off next summer.

Quarterback Sam Richardson will return along with running backs Aaron Wimberly and DeVondrick Nealy (and even Rob Standard who we’ve still yet to see much of).

Regarding wide receivers that currently play, Justin Coleman and Albert Gary are the only Cyclones set to graduate.

Iowa State started nine players with starting experience vs. Iowa on Saturday and as of now, I am projecting around 15 returning starters to be in the lineup at the beginning of the 2014 season (and that’s assuming that these guys keep their jobs and are not beaten out, which as we’ve noted wouldn’t be a bad thing).

The above was not written to be an excuse for Iowa State football’s 0-2 start to the season, but it should help you understand why so many underclassmen are lacing it up for the Cyclones at this point in time.

Multiple misses at similar positions early in the Rhoads era (linebacker especially) combined with improved recruiting in other areas has a lot to do with it.

I’ve written numerous times that when it comes to teaching and developing, this is where Rhoads thrives. The youth, the talent and that factor are all reasons why despite an 0-2 start, the final 10 games of the Iowa State football season are still very much worth paying attention to.

Saturday’s loss to Iowa was disappointing, but even the most dejected fan on our forum has to admit that he saw significant improvement in multiple facets of the game.

Reaching a bowl game will be tough this year, but watching the potential stars of tomorrow develop in front of your very eyes will be interesting over the next few months. And with a Big 12 Conference that is visibly down, some surprising wins along the way shouldn’t be too hard to come by either.