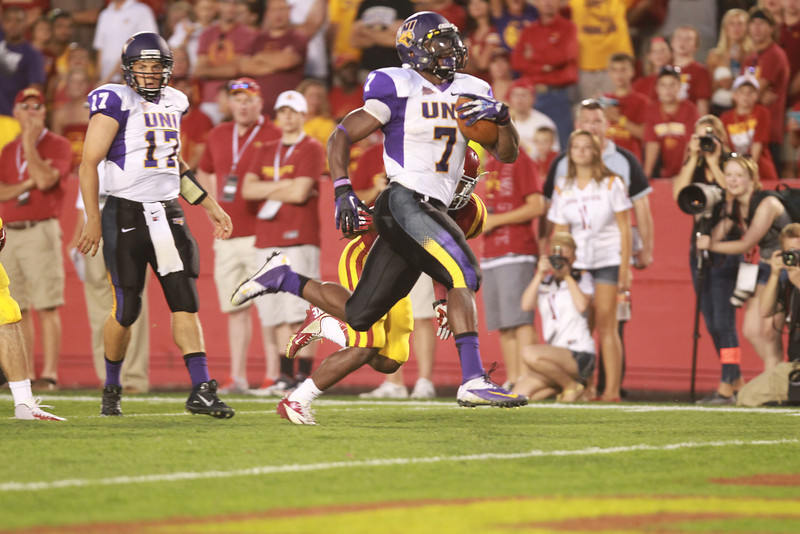 I pulled into my driveway at 1:30 Sunday morning caked in sweat and carrying a greasy chicken quesadilla from Taco Bell. I can count the number of times I have stooped to eat such nutrition at that hour on one hand; the rest of the occasions involved a spirited night on the town and wanting to piece together the foggy details of the preceding night. On this early morning, I inhaled the fourth-meal trying to forget.

In the four years and one game Paul Rhoads has been at the helm, his Cyclones have taken care of business against teams they are expected to beat. Prior to the loss to UNI, the Cyclones were 13-2 when favored to win. And both those losses were virtual toss-up games in Vegas; a three point favorite against K-State in Arrowhead in 2009 and a two point favorite at Colorado in 2010. The Northern Iowa blunder was an entirely different story. Iowa State has had its share of disappointing losses. In fact, as part of the initiation into being a Cyclone fan, you are required to be kicked in the groin at least once. Most of the disappointments in past centered around not getting over the proverbial hump or losing in the most heart-breaking way; that was not the case on Saturday. The Cyclone fans set the stage for a massive party 57,000 strong and the guests of honor stood them up.

There are obviously a number of things that caused the 28-20 defeat to the Panthers, but you can stop and stare at this: Northern Iowa had 33 carries for 228 yards.

Run defense was a huge question mark coming into the season. All fall camp Rhoads and Wally Burnham maintained their defense was a work in progress. The rest of us optimistically talked ourselves into talent overcoming inexperience. Turns out having Jake Knott on the Philadelphia Eagles and A.J. Klein on the Carolina Panthers left gaping holes in the defense and UNI’s David Johnson ran right through them. (Not to mention the unheralded Jake McDonough and Cleyon Laing.)

Wally Burnham’s number one philosophy in every game is stopping the run. If teams can run at will, it is a truly helpless feeling. Since Rhoads and Burnham arrived, teams have run for 200 yards or more 21 times against the Cyclones; Iowa State is 3-18 in those games.

The good news is the Cyclone coaches now have sixty minutes of nightmarish tape to show the young defense. The first half in particular reached NC-17 levels of horror. The late Marquette basketball coach Al McGuire once famously said, “The great thing about freshman is they become sophomores.” Mistakes that were made in the first half were not being made in the second half,  but it is clear Burnham and crew will have to summon a good portion of his wizardry to get this group ready for the Big 12.

Cyclones are used to being the underdogs, which is what makes Saturday’s turn of events so disconcerting.  Falling as a clear favorite is an unfamiliar and somewhat surreal experience. Iowa State learned the hard-way that despite having the edge in depth and talent, in football you can’t “out-status” somebody, you have to out-execute. It’s the same formula that they used to their advantage in the Rhoads upset specials in years past.

For a program that was on an upward track and full of positive momentum, the loss to the Panthers put a dent in the Cyclone swagger wagon. From now till December, Iowa State will be relegated back to afterthought status by the Big 12 powers; a position where they operate best.

The first chapter of the 2013 season was an uncomfortable sweaty mess; here’s hoping the last eleven help us forget.