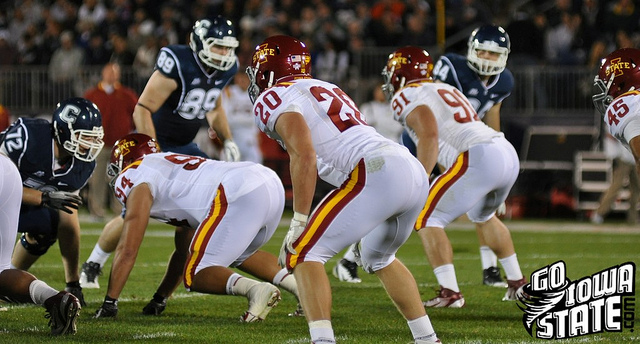 Well that didn’t exactly go as planned. In the middle of the fourth quarter on Saturday night, it got to the point where you expected Rick Astley’s "Never Gonna Give You Up" be splashed on the Jumbo-Tron as some elaborate Texas Rick-Roll. The Longhorns did enough damage as it was. And the Cyclones didn’t exactly help the cause.

As my good friend JW said during the game, "I’ve seen Iowa State teams shoot themselves in the foot, but this is downright Plaxico Burress like." This made me laugh in an otherwise miserable evening.

It is pretty obvious to any and all observers that Iowa State’s self-inflicted issues are problematic. We’ve all seen the stat by now: Iowa State is 119th out of 120 teams in penalties per game. And tied for dead last in turnover margin at -2.0 per game. It is rather remarkable Iowa State is 3-1 by looking only at the numbers.

Analyzing numbers can be a misleading venture. As author Gregg Easterbrook once said, "Torture numbers and they will confess to anything."

I must admit that I am a number torturing fiend. If this kind of torture were frowned upon, the ACLU would be on me in no-time. Luckily, we’re safe for now and I can water-board numbers into oblivion.

That said, let’s take a closer look at this mysterious turnover problem that is confounding the Cyclones.

Turnovers are the most important aspect of any football game. It is cliché as cliché can be. But it is true. The clearest predictor of success in football is winning the turnover battle.

Here are last year’s BCS representatives and their corresponding turnover margin rank. (Out of 120 FBS teams.)

It’s the same basic story on down the line. And Iowa State is no exception.

Turnovers are like money. Everybody wants them and yet you don’t know how vital they are until you fritter them away.

At Iowa State, they become even more valuable because the Cyclones have a smaller margin of error than most conference mates. Turnovers smash the talent gap.

Right now a lot of you are saying, "C’mon Blum, my 87-year old grandma knows you shouldn’t give the other team the ball back. Tell me something I don’t know."

Touché. It is easy to spot the turnovers you commit on offense. Everybody remembers their own car crash.  It is creating opportunities for the opponent’s self-destruction that is the biggest riddle.

The Wally Burnham defensive philosophy centers around giving the opposition enough rope to hang themselves. During the first 21 games of the Rhoads/Burnham era, the Cyclones were excellent in doing just that.

After forcing four turnovers against Texas last year in Austin, Iowa State had created 51 turnovers in the first 21 games under Rhoads/Burnham. Almost 2.5 per game. During that time span the Cyclones were second in the nation in turnovers forced, trailing only Ohio State’s 56. Not too shabby. (The eight turnover monstrosity in Lincoln, Nebraska helped the cause immensely. I think Niles Paul just fumbled again).

But in the eight games since that 2010 win in Austin, the Cyclones have created a meager nine turnovers. The defense has played exceedingly well in those eight games, giving up 400 yards or less in each game – the last time a Cyclone defense put together a string of eight 400 yard or less games was in 1982 when John "The Landshark" Arnaud anchored the Iowa State D (better known to the young folks as Austen’s father). And yet, Iowa State is 4-4 in that streak largely because of the lack of turnovers forced.

Quick trivia question: When was the last time a member of Iowa State’s secondary had an interception?

……Bueller, Bueller. (The 20-year olds reading this don’t understand the reference and that makes me feel old. Might as well start heading to Perkins for the Farmer’s omelet and senior coffee special.)

Stephen Ruempolhamer has Iowa State’s only interception this season. I like the Big Dutchmen, but he should not be standing alone in this category.

Forced turnovers not only give the defense a stop and flips momentum, but it leads to shorter fields for the offense.

Discounting overtimes, the Cyclones have started drives in their opponents territory just five times this season (three against Iowa, once against UCONN, and  once against UNI when the Panthers fumbled a lateral with 20 seconds left). In comparison, Texas had four drives start in Cyclone territory in the first half alone on Saturday.

The good news? These things generally even out over time. Jeremy Reeves has been close to three interceptions on his own in the past two games. Cue Skee-Lo: "I wish I was a little bit taller…." I feel for you Mr. Reeves.

The Cyclones are due for a few positive bounces of the prolate spheroid. It’s no time to give-up on the bowl chances yet. There’s a plethora of season to be played. Might as well flip the script in Waco.