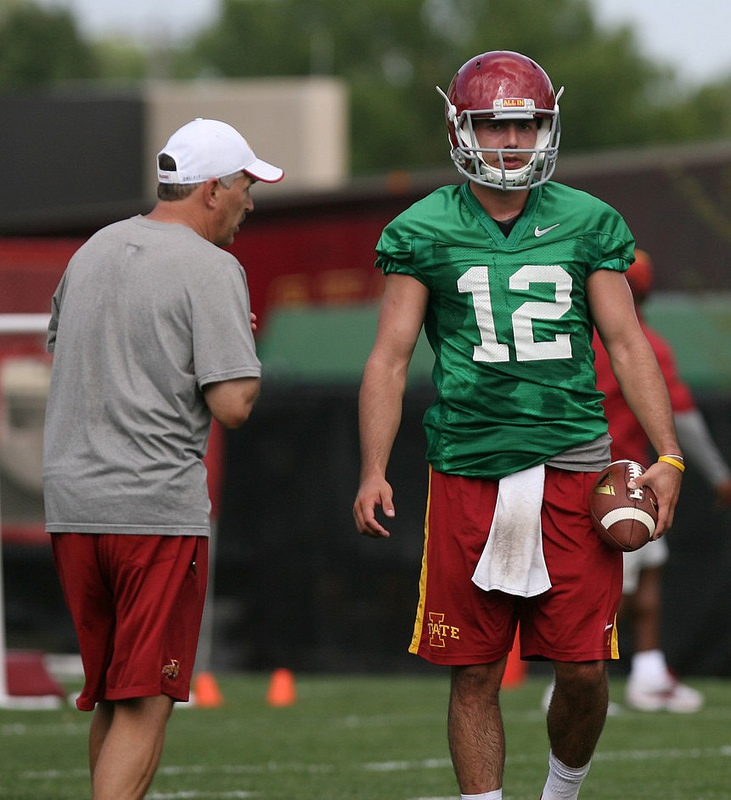 AMES — I’m sure you’ve heard the news by now.

If not, let me refresh you. Sam Richardson’s (the Iowa State quarterback) old high school teammate, former South Florida wide receiver D’Vario Montgomery, is reportedly in Ames today. According to multiple reports, he could commit to Iowa State at any time and enroll in classes next week.

Montgomery is a former 4-star prospect who chose South Florida over pretty much everybody in college football back during the 2012 recruiting period. He was a big Skip Holtz guy apparently. Well, Dr. Lou’s son bolted for La. Tech back in December and Montgomery has reportedly been disgruntled ever since. That brings us to today.

While trying not to get ahead of myself, it’s impossible to not play the “what if” game when thinking about a scenario like this.

What if Montgomery decides to become a Cyclone?

That means that Iowa State’s group of wide receivers in 2014 would look like this:

That’s a lot of young (albeit unproven) talent. But there’s talent there. No doubt.

Now there are obviously a lot of hurdles that the Cyclones need to cross before getting to this point. Let’s list them…

1)   Sam Richardson still needs to prove himself as a starting quarterback in the Big 12. The reviews have been positive out of camp so far, but we need to see more No. 12 before anointing him as the next Sage Rosenfels.

2)   The same goes for the offensive line and this whole “Pistol” offense for that matter. These things always sound great in the offeseason. How will they look against actual competition?

Regardless, the wide receiver position has been a constant struggle throughout the first four years of the Paul Rhoads era. Certain pieces have always been there. For example, Josh Lenz was a quality receiver, but he couldn’t stay healthy as a senior. When he was healthy, a never-ending quarterback controversy hindered the entire offense. The running game was consistently lackluster and the line got beat up more than it gave beatings.

This Montgomery news is encouraging though, should it all come to fruition, of course. Even without him in the mix, Iowa State’s wide receivers in 2014 look to be as deep as a group as I’ve ever seen in Ames. Montgomery would be a ridiculously large cherry on top (he’s listed as tall as 6-foot-5 in some places, 6-foot-3 in others).

And the fact that he used to play high school ball with Richardson? Well, that chemistry is priceless.

*** More on wide receivers…As you’ve probably read by now, it sounds like redshirt freshman Dondre Daley put on quite the show during Saturday night’s scrimmage. This doesn’t really surprise me. I’ve heard great things about him from the day he stepped on campus. How much will Daley contribute as a redshirt freshman? I’m still really not quite sure. But he’s got a bright future in Ames though. That’s what I’m told at least.

*** I’m also not surprised that Luke Knott is pushing Jevohn Miller at WILL linebacker. This is a very positive thing from the standpoint of, Iowa State doesn’t much depth at all across the board at linebacker. If a rookie is pushing a veteran, that means that Iowa State can go at least two deep at one of its linebacker positions. Like I wrote on Saturday night, chances are that both of these guys will play a lot this fall, regardless of who “wins” the job.

*** The same goes for that open cornerback spot. If it is Charlie Rogers,Kenneth Lynn or Sam Richardson (the defensive back), all three of those guys are going to play a lot this season for Iowa State. When Iowa State is in the nickel, two of the above three will be in the game at the same time anyway. These competitions are fun to write and talk about but at the end of the day, they are borderline meaningless too given the way that Rhoads and Wally Burnham like to sub on defense – especially in the lightning fast Big 12.

*** Stay tuned for a fresh camp report on our front page this afternoon. Media availability is scheduled for 11 a.m. today. Also this week, I’ll be posting Brent Blum’s season preview and a video that will get you all jacked up by Matt Van Winkle. And last but certainly not least, who is on board for Saturday night’s Cyclone Fanatic Kickoff Party at BenchWarmers in Ankeny? It’s going to be a hoot and we’re giving away all sorts of prizes. Be there!