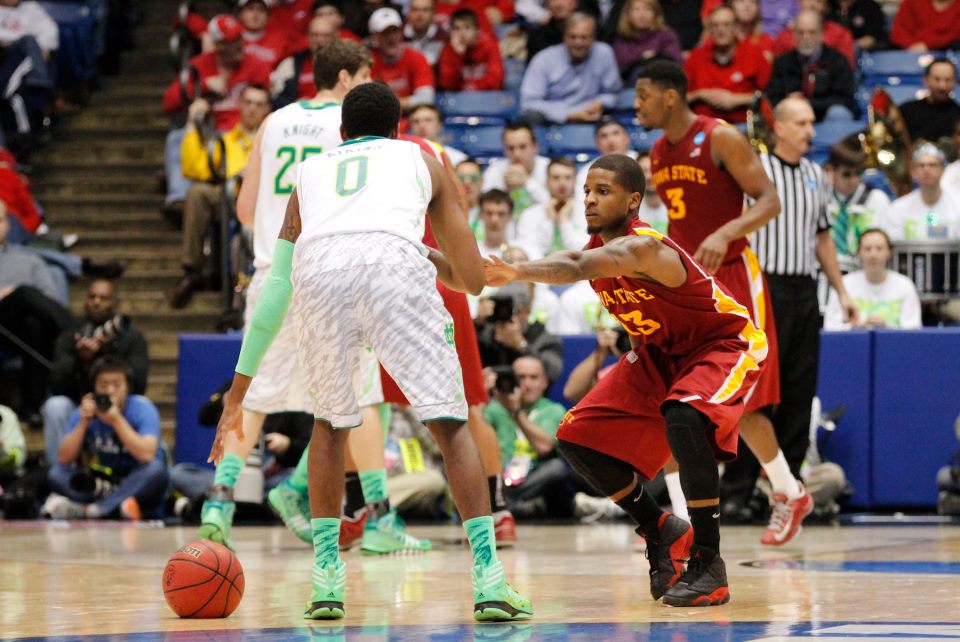 To a point, the folks who have repeatedly made this claim haven’t been that far off throughout the 2012-13 season. Iowa State finished the regular season ranked second-to-last in the Big 12 in scoring defense. Numbers don’t lie.

Iowa State’s two regular season losses vs. Kansas during the regular season are another great example. Those were without question two of Iowa State’s best offensive performances of the year. The Cyclones scored 89 and 96 points in those contests (both overtime affairs) and somehow lost each of them. That is hard to do in college basketball.

Iowa State, the nation’s leader in 3-pointers per game (9.8), is not known for its scrappiness on defense but as the Cyclones proved in Friday night’s 76-58 NCAA Tournament second round victory over Notre Dame, they aren’t the helpless saps on that end of the floor the way that many would lead you to believe.

Leading up to the NCAA Tournament, Mann motivated his team by sending out multiple reminders about what people think of the Cyclones and their lack of grit on the defensive end.

“He made a comment to me early in the week that someone on ESPN mentioned that we don’t play defense,” said Will Clyburn. “I made a couple of jokes that we are the best defensive team in the country in practice.”

We talkin’ about practice Will?

During the week leading up to Notre Dame, practice made perfect.

"I think last game was probably our best game defensively," said a member of the Big 12’s All-Defensive team, Chris Babb. "I think we did a good job of having a lot of ball pressure, getting deflections and I think what’s going to be most important this upcoming game against Ohio State is limiting them to one shot, really boxing out defensively and getting rebounds that allow us to get out in transition.

Clyburn specifically took extra pride in his defensive effort vs. the Irish.

“Will yesterday and all week in practice said how he would not let his man score on him,” said Mann. “This morning when I saw him, he said ‘Coach Mann, did you see that my man did not score on me?’ They all have adapted a toughness philosophy here in the last week.”

Across the board, Iowa State brought it on defense vs. the Fighting Irish. Notre Dame’s backcourt combination of Eric Atkins, Jerian Grant and Pat Connaughton combined to go 6-for-20 from the field while forcing 17 Irish turnovers along the way.

“We were amped up,” said Tyrus McGee. “Everybody was focused on defense. We were loud. We were talking. It was a good thing.”

The bigs did their part too. While Iowa State’s undersized posts have done very respectable job of rebounding all season long, they got into foul trouble a lot. It’s been a theme of the season. At halftime on Friday, the duo of Georges Niang and Melvin Ejim only had one foul between the two of them. That changes things on both ends of the floor.

If Iowa State wants to advance the Sweet 16, it will need to bring that same sort of effort on Sunday vs. No. 7 Ohio State. The Cyclone coaching staff is confident that will indeed be the case.

“We have to rebound the ball against an extremely gifted and athletic team,” said assistant coach Matt Abdelmassih. “We have to get stops in transition. We can’t give them easy opportunities. That defensive presence, it will be there. If you can’t get up for this game at 12:15 tomorrow, it is probably the wrong deal for you.”