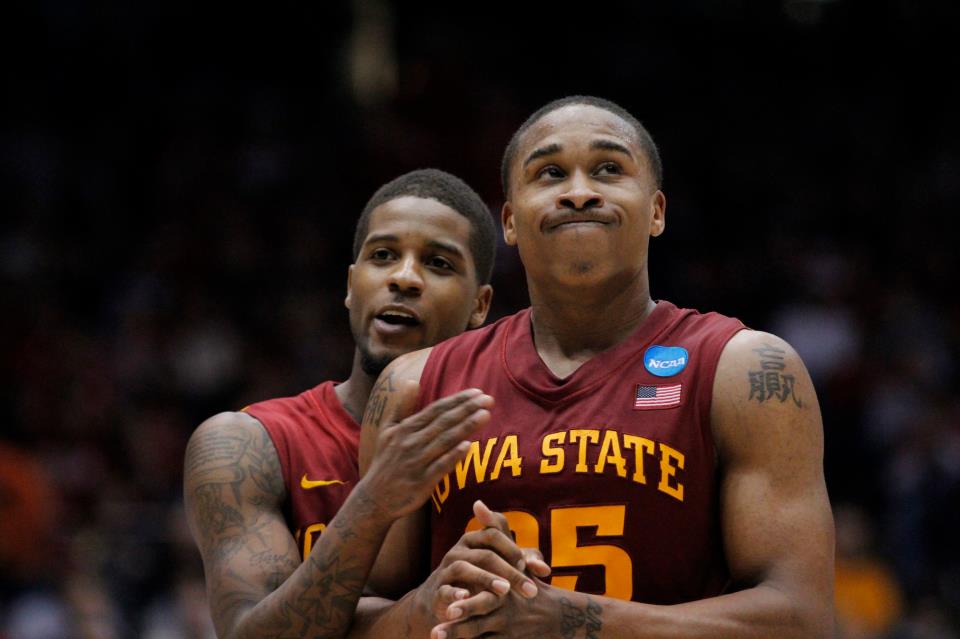 When Iowa State trailed Ohio State by thirteen points with six minutes to play, I sat back in my couch and smiled. "Just enjoy the last few minutes of this remarkably entertaining team," I thought to myself, "We will never see a group quite like this one."  I didn’t give them much of a chance to get back into the game, the challenge was too steep, the staunch Buckeyes had already absorbed Iowa State’s best upper-cut and were going to coast to another Sweet 16. And I was content, not angry, not overjoyed..but content.

This rag-tag group of transfers, unconventional pieces and three-point artists had made Cyclone Nation proud, there was no shame in losing.

Then the incredible unfolded. Iowa State mounted one of the most spirited rallies in Cyclone history. This feisty group scored on eight straight possessions on one of the best defenses in the country. Ejim, then McGee, then Clyburn, then McGee, then Lucious. It was a surreal two minute stretch; down 13 to dead even in less time than it takes to make microwave popcorn.

With each bucket, the cheers grew louder in living rooms across the Cyclone Nation. When Ohio State was forced to call a timeout, I found myself unconsciously standing and yelling with no cognizance of where I actually was. I felt like that five year old kid who became an internet sensation after being given a dose of Novocain at the dentist.

Is this real life?!

When Tyrus McGee came off a curl cut to the top of the key and spotted up for a 24 footer with someone bearing down on him to give Iowa State a one-point lead, the world slowed down for a tick. You knew it was going in. Just knew it. Splash.

It was the perfect come-back in front of the nation’s eyes for a group that nobody gave a chance. As a unit, they were picked eighth in the conference by the Big 12 coaches. And as individuals, they were after-thoughts and also-rans.

They were a group of guys with baggage, talent deficits or question marks that all came together under their quiet leader to become one of  college basketball’s most entertaining, yet snake-bitten squads. No matter the end result, they were always entertaining. Boring was not in their vocabulary.

We could focus on the gut-punching losses; in five of Iowa State’s 12 defeats, the Cyclones led or were tied in the final minute. Or on the game-altering charge call on Will Clyburn that ultimately extinguished Iowa State’s ride to Tinseltown and the Sweet 16. It is always easier to remember the end tragedy; the finality of a win or a loss in the NCAA Tournament is what makes it the nation’s best sporting event.

But it is the experience prior to the final horn that I hope most remember about this occasionally reckless, always care-free club.

I tend not to think too philosophically about life. I leave that to people much smarter than I. But I believe that we follow sports because they mean something to all of us. In a world that moves faster by the minute, we still carve out hours in a week to sit back and watch our teams compete. It may seem like a silly investment in precious time, but that moment when Tyrus McGee’s three splashed through the net elicited a feeling that is hard to recreate. Pure unadulterated elation. It was a Jeff Woody slams into the end-zone against Oklahoma State type of rush. Those moments don’t come often, but when they do, you have a hard time forgetting.

With the high tide of emotion comes an equal fall. And Cyclone fans have the all-too familiar knowledge that jubilation can turn to misery in the split second of a block/charge call. That is the risk you take in anything that means something.

Ohio State fans are going about their day today with another tally added to their victory mantle. Mark down another innocuous Sweet 16 for the Buckeyes. They probably won’t think twice about the Iowa State escape in the years to come, they have football games with Michigan to worry about. But I can guarantee you, 15 years from now, every Cyclone fan will remember where they were the day Iowa State’s band of characters mounted the rally of 2013. They will also recall the pit in the stomach that followed as another opportunity was snatched at the final horn.

But the turn of events meant something. And that inescapable feeling is what brings us back for more.

For that, I thank this group of enigmatic Cyclones. They didn’t have the overwhelming power of a Fizer or Tinsley team, no individual brilliance of a Royce White, they didn’t beat you up like the Willoughby/Cato/Pratt/Bankhead squads and didn’t have the local connection like Hoiberg’s and Meyer’s early ’90’s group. This team was its own unique breed, had their own story. They created an engaging legacy that will last far beyond a three at the buzzer. What an enjoyable ride it was.