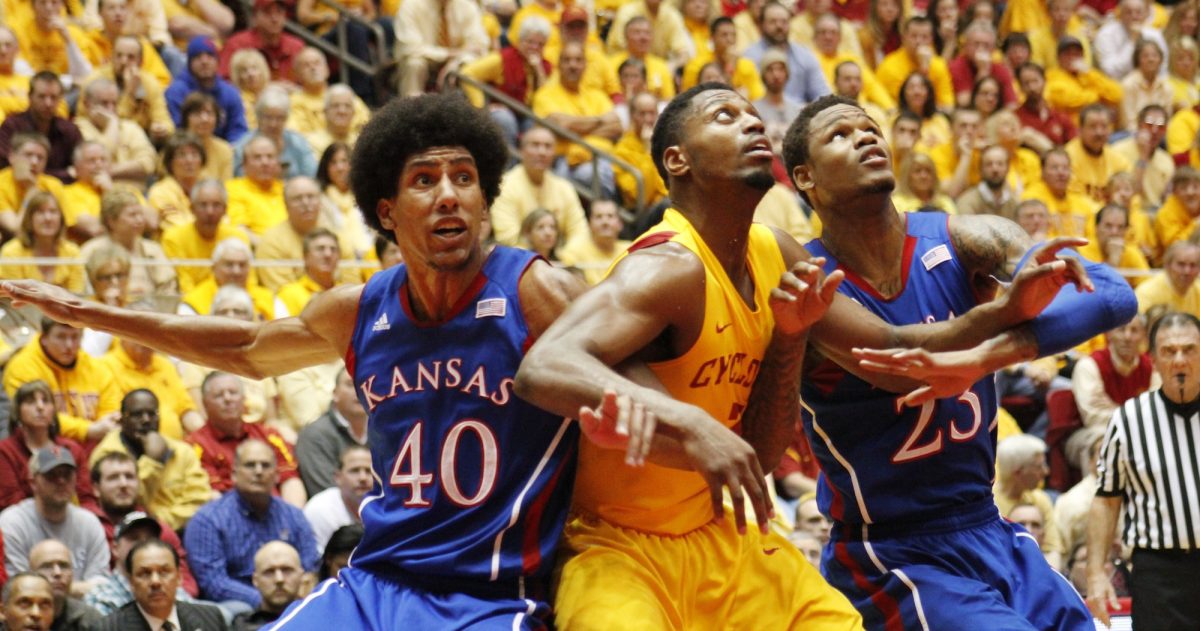 Iowa State’s 108-96 overtime loss to Kansas on Monday night was setting itself up to be an all-time Cyclone classic – one of those games that you would show your kids a replay of 10 years down the road and say, “I was there.”

This astonishing story was supposed to go like this: Fred Hoiberg’s Cyclones made a school record 17 3-pointers and slayed the No. 6 Jayhawks while icing an NCAA Tournament berth along the way. It was a season-changing victory that made the Cyclones a legitimate contender to win a Big 12 championship. It was a win that gave an insanely confident team even more swagger for its remaining three games in the regular season.

And Tyrus McGee…Oh talk to me about Tyrus McThree. Win that one and Iowa State’s Energizer Bunny would have joined the likes of Rhodes, Grayer, Hoiberg & Sullivan as a Cyclone legend. The senior hit some of the most difficult shots we’ve ever seen in Hilton Coliseum on that incredible night.

It’s too darn bad that Kansas’ often forgotten about senior, a young man by the name of Elijah Johnson had other plans.

Johnson, who entered Monday averaging 8.4 points in Big 12 play, threw down one of the most remarkable performances in Kansas basketball history, which is saying something. Johnson dropped 27 points in the second half alone and 39 in the game while hitting clutch shot after clutch shot and ultimately ruining Iowa State’s magical night.

Afterwards, Kansas coach Bill Self joked that Wilt Chamberlian had some pretty good games in a Jayhawk uniform, but Johnson’s performance ranks right up there.

“That will go down as one of the better games that any guard has ever played at Kansas,” said Self.

Those Jayhawks are a sadistic bunch aren’t they? Kansas isn’t a thorn in Iowa State’s side. Kansas is a knife in Iowa State’s back. This game isn’t a tough pill for the Cyclone Nation to swallow. It is an impossible pill to swallow. Up five at home with 45 seconds to play, the Cyclones thought that they had it in the bag. Every sign in the world was pointing to a critical Cyclone victory.

Check these stats out: Seventeen 3-pointers. Only eight turnovers. Heck, five Cyclones ended the night in double figures. That’s a sure thing right?

But instead of becoming a stone cold lock for the Big Dance and beating mighty KU for the second season in a row, the Cyclones now have two overtime losses to the Jayhawks in one season – both games in which Iowa State most certainly could have won.

“It’s hard,” said Korie Lucious, who led Iowa State with 23 points. “We felt like we had the game won. I don’t know. We just couldn’t get stops at the end of the game and let them come back, get a couple of buckets in transition and that’s the reason we lost.”

If you’re looking from good news to come out of this, it is this.

“We’re playing with a tremendous amount of confidence on the offensive end, as much as any team I have ever been around,” said Hoiberg after the game.

In two games vs. Kansas, one of America’s best defensive teams, Iowa State has scored 89 and 96 points. Confidence is not an issue with this group of Cyclones and as we’ve learned time after time again this season, neither is resiliency.

“They guys, they will bounce back,” said Hoiberg. “They have shown it all season. It is a team that has been extremely resilient. I’m confident that we will bounce back with a great practice.”

Up next for Iowa State is a road trip to Oklahoma on Saturday and almost an entire weak to lick its wounds from maybe the most painful loss of the Fred Hoiberg coaching era (maybe – there are a lot of them).

Iowa State has bounced back from one gut-wrenching loss after another all season long. How much more gas is left in that tank though?