“We could not have played better defensively,” Iowa State head coach Bill Fennelly. “Brynn chased Fussell all over the building. They run a play for her almost every play down the floor. Our guards played together as well as they have all year. We held them to four points in the last six minutes. That is how you win on the road.”

The Cyclones led by 18 after a Prins trey with 19:11 left in the game. Texas slowly whittled the lead down to seven, 51-44 on a basket by Empress Davenport with 7:12 left in the game. Davenport led the Longhorns with 13 points. But Iowa State got the baskets it needed down the stretch, including three-pointers by Moody and Williamson to outscore Texas 16-4 for the balance of the game.

“Anna had some big threes for us and she joins a list of great players and a list of great people at 1,000 points. We outrebounded (32-31) the top rebounding team in the league. It was a great team effort.”

Fussell entered the game leading the Longhorns in scoring at 15.1 points per game. Williamson held Fussell to 10 points over 38 minutes. Fussell was just 4-of-12 from the field and 0-for-6 from behind the arc.

“(Fussell) is one of those players who if you relax for just one second, she will burn you,” Williamson said. “They run a lot of plays for her and she is willing to take shots that other players would not.”

The Cyclones played one of their best halves of the season before intermission. Prins reached the 1,000-point barrier when she hit a three with 14:18 left in the first half. The Cyclones hit on 7-of-13 (.538) three-point attempts in the first half while Texas was just 1-of-11 (.091). Iowa State scored the last 15 points of the first half and led 39-24 at the break. Texas missed its last nine shots of the half.

Iowa State, tied for third in the Big 12 with Texas Tech (the Cyclones have beaten the Red Raiders twice this season) in the league standings, will play host to Kansas State Saturday at 1 p.m. CST in Hilton Coliseum. 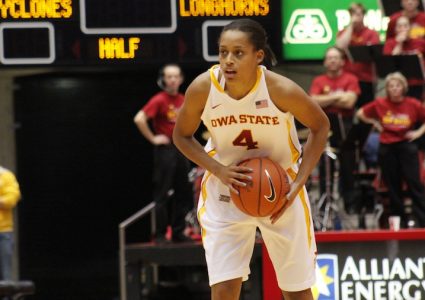 Cyclones take down Texas in overtime