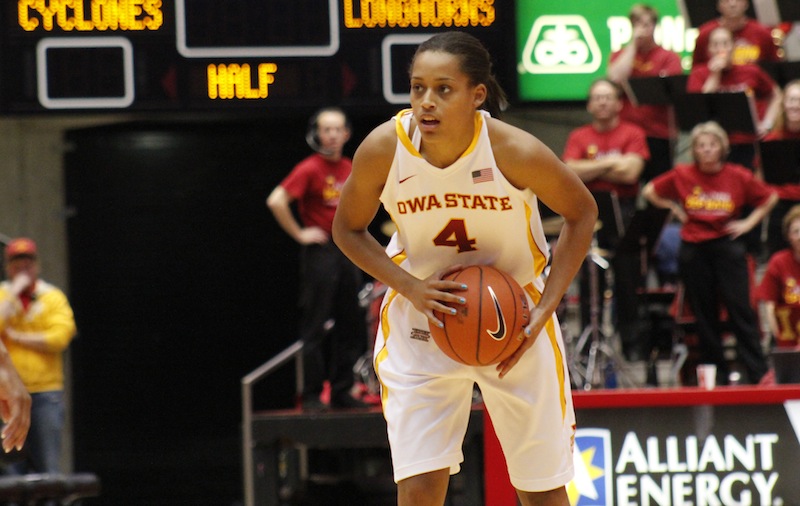 Cyclone Fanatic’s coverage of Iowa State women’s basketball is brought to you by our good friends at Wilson Toyota of Ames.

The Cyclones outlasted Texas, 73-65, Wednesday night in overtime. In a foul-plagued game, Iowa State (10-1, 1-0) made the plays in the extra period to seal the victory.

“As someone reminded me as I was walking in here, I’ve only got 17 more of these to go,” Iowa State coach Bill Fennelly said.

The Cyclones trailed 53-47 with under four minutes left in the game. Fortunately for Iowa State, Anna Prins and Nikki Moody were wearing Cardinal and Gold.

Twice Prins scored inside, then the senior swished a huge 3-pointer to give the Cyclones a 54-53 lead. On the last two baskets, Moody dished the ball to her teammate.

It appeared Iowa State would hold that advantage, but Chassidy Fussell had other ideas. With only six seconds left, Fussell drilled a trey from the left wing to send the game into overtime, 59-59.

That’s where Moody shined. Playing toward the hoop, Moody dominated the final period. The sophomore’s basket inside gave Iowa State a 64-61 edge.

Later, Moody made another nifty move in the paint to break a tie and push the Cyclones in front 67-65. Moody clinched the victory with a pair of free throws. She finished with 14 points, 10 rebounds and six assists.

“I kept telling her, ‘You got to get into the gut of the defense and make something happen,”’ Fennelly said. “She hit some really, really tough shots. I thought offensively she was more assertive.”

Prins backed Moody’s effort with 17 points of her own. Chelsea Poppens scored 16 points despite battling foul trouble much of the game.

The victory is significant because now Iowa State will play two-straight road games. The Cyclones travel to Texas Tech on Saturday before a trip to Baylor on Jan. 9.

“(The win) motivates us,” Poppens said. “It shows us what we are capable of.”

Williamson stayed on the court for all 45 minutes of action against the Longhorns (7-5, 0-1) and held Fussell to just 15 points.

Fussell entered the game averaging 17.2 points per game. Under duress from Williamson, Fussell made only 6-of-15 shots in 42 minutes.

“For the most part, I thought (Williamson) did a great job on (Fussell),” Fennelly said.

“I said in the shootaround today, if Chassidy Fussell runs to the restroom, run with her."

Iowa State scored its first victory of the night before the game even started. Waterloo West junior Blaire Thomas committed to the Cyclones on Wednesday afternoon.

“They really fit my style,” Thomas said. “It was a good fit for me and my family.”

Thomas is averaging 16.9 points per game this season in helping Waterloo West to a 7-3 record. Thomas stands 5-foot-11 and could play either forward spot in college.

“I’m a pretty versatile forward,” Thomas said. “I rebound a lot and I score a lot.”

Bill Fennelly on keeping his players fresh throughout the Big 12 while only playing seven players.

“The two things I told them is, ‘You’re young, you’re healthy, you’ll be fine.’ We have ice baths. We have great trainers.”

–       Off the bench, Kidd Blaskowsky and Fallon Ellis each notched five points.

The Cyclones start their two-game road trip on Saturday at Texas Tech. After squaring off with the Red Raiders, Iowa State will take on the defending national champions, Baylor.

So much for easing into Big 12 play.

The matchup in Lubbock figures to be a defensive battle. Texas Tech (11-2,1-0) won at No. 13 Oklahoma State 64-59 to open conference play on Wednesday.

Tip is schedule for 7 p.m. with the game airing on FS Southwest.