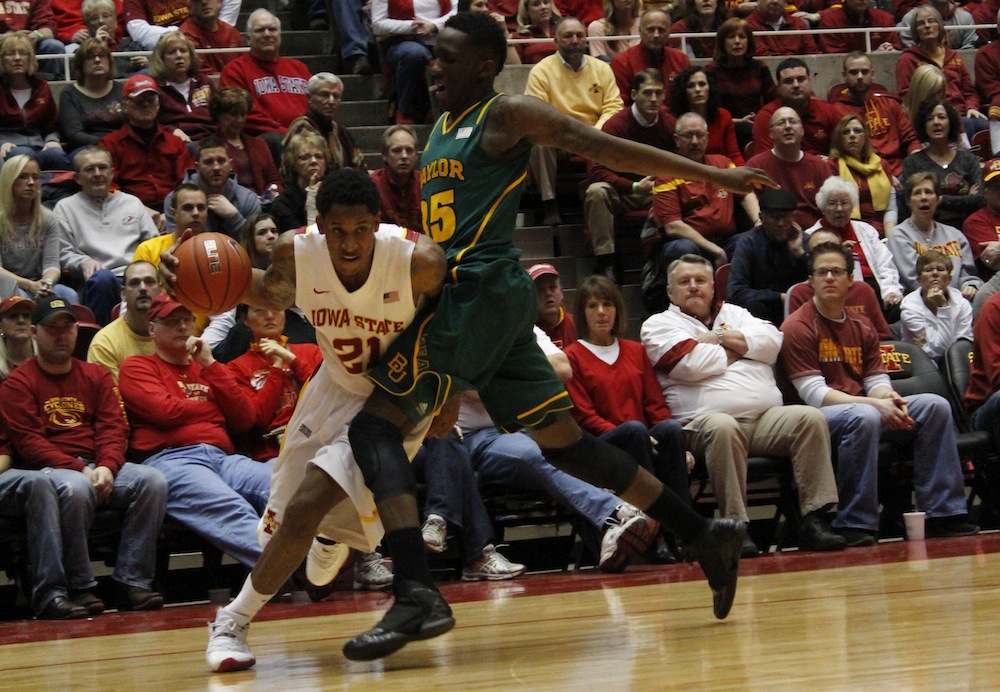 Before diving into the world of Iowa State athletics like I do every Monday morning here at Cyclone Fanatic, I want to begin this week by thanking you.

I want to thank you all for being so loyal to this website (you keep coming back and our numbers keep getting better by the month) and you are loyal to our advertisers as well (this is why we’ve been fortunate enough to stay in business for over three years).

And finally, thank you to all of you who attended last week’s 4th Annual Cyclone Fanatic Recruiting Party at the Keg Stand. It was once again a major success and is my favorite night of the year (yes better than Christmas Eve) without a doubt.

I can speak for the Iowa State football coaching staff too when I write that it is a night they look forward to every February too. Last week, I made sure to ask a handful of the guys if they enjoyed the event, things we could do better, etc. Their response was unanimous – they love it because of you fanatics.

— While writing my preview last Friday, I was reluctant to pick Iowa State to go on the road and beat Kansas State but I did anyway. I should have gone with my gut. The Wildcats simply defend the basketball too well to have expected an Iowa State win in Manhattan. Sure, it was a distinct possibility for a good Iowa State team to snag the win but give credit where it is due – Kansas State is a very salty squad.

— Iowa State will have a hard time beating anybody away from home when its best player, Will Clyburn, only scores six points while committing five turnovers.

— “Good things happen when Will Clyburn takes the ball to the rack.”

That’s been a common saying throughout this season. On Saturday, Clyburn didn’t shoot a free throw (not good). As a whole, the Cyclones only show seven free throws on the day (that’s even worse). Buckets were hard to come by.

— I found it interesting that after playing well against Oklahoma, Anthony Booker didn’t see the floor against Kansas State. One can only assume that Korie Lucious’ foul trouble, which led to 20 minutes of PT by Bubu Palo, was what doomed Booker. Ever since Palo returned to the floor, Booker has played sparingly.

— I’d encourage you not to freak out over this loss. As noted earlier, Kansas State is a pretty decent club. Along with Oklahoma State, the Wildcats are playing as well as anybody in the league right now. I’ll be surprised if any Big 12 team wins in Manhattan for the rest of the season. They call it the "Octagon of Doom" for a reason.

— This brings me to that blasted Texas Tech game back in January. With Kansas’ recent woes, how much does that one sting now? What Iowa State did with that loss was essentially spot every other team in this wild Big 12 race a game because as you’ve seen over the last two weeks (Tech has lost four straight in an ugly fashion), nobody else (other than maybe TCU and perhaps Kansas at this rate) is losing in Lubbock this season. My point? The Cyclones HAVE to get some road wins.

I would be a lot more confident about Wednesday’s trip to Austin if it weren’t for the fact that Texas point guard Myck Kabongo is coming back from a 23 game suspension. That’s either going to go one of two ways for Rick Barnes. Kabongo is either going to bring a flurry of energy to his team that desperately lacks is or the Longhorns have already cashed out on 2013. My guess is that Kabongo will be that energy guy. He’s a point guard – a very good one at that. An elite point guard makes everybody around him better. I’m worried less about Kabongo’s stats and more about what a guy like Sheldon McClellan (who only played one minute up in Ames earlier this season) might do with his leader back beside him.

The fact that this is Kabongo’s first game back just might result in some extra motivation for an underachieving team that is currently 2-8 in the Big 12. My gut tells me that the Cyclones better be prepared for one hell of a fight on Wednesday night. In fact, I wouldn’t be shocked if Texas is favored.

— Iowa State is 5-1 after losses this season. Apparently these Cyclones aren’t fans of losing. That’s a good thing.

— As of this morning, KenPom.com has Iowa State going 11-7 in the Big 12 with road wins at Texas and West Virginia – if you’re into that sort of thing. Personally, I think it is more likely that Iowa State will win at Oklahoma (I like that match-up more) and drop one to either Texas or West Virginia (I’ve come to learn to just expect the unexpected with this team). KenPom.com also has Iowa State losing at home to Kansas, which I disagree with. The point is that even after Saturday’s loss (Iowa State has played its three toughest road games), getting to 12 wins in the league isn’t a nutty thought at all for Iowa State.

— I’ve been saying this for weeks: I do NOT think that Iowa State is a bad road basketball team. In Big 12 play, Iowa State has lost to the league’s three best teams on the road. Most teams will do that this season. It is winning at Texas, West Virginia, Tech (errrr) and perhaps Oklahoma that matter so stay tuned.

— Back to Kansas State…I think that Bruce Weber is a solid basketball coach – but how good of a recruiter is he? That is my worry today if I’m a Kansas State fan. Now I just spent all last week telling you that recruiting rankings aren’t the gospel but if you look at what Weber is doing with his 2013 class, it won’t blow you away. It isn’t a bad class so don’t get me wrong there. It just isn’t at the level that Bob Huggins and Frank Martin were bringing kids in.

— How big is tonight’s Kansas State @ Kansas game? Good golly. Nobody, NOBODY, saw this coming with Bill Self’s Jayhawks. I mean, I did write about a month ago that I thought Kansas would have three or four Big 12 losses when it was all said and done. But never in my right mind did I think that KU would EVER drop three in a row, with a home loss (Oklahoma State) and road game at TCU in the mix. No way!

— I’m a big fan of the great Rich Fellingham (Iowa State women’s basketball play-by-play announcers) but it needs to be pointed out that Bill Fennelly’s Cyclones are 3-0 while Rich has been on vacation. Yep. I’m giving Brent Blum all of the credit for Iowa State’s recent hot streak. Just kidding of course. But seriously, if Iowa State wins at Oklahoma on Thursday with Blum in the chair, a three-person booth needs to be given serious thought for the rest of the season. Blum is good luck.