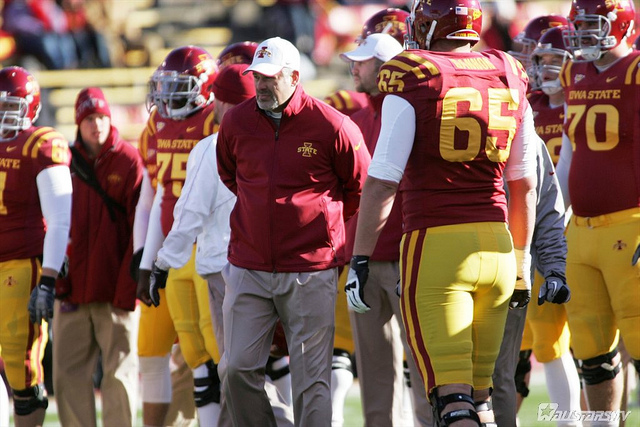 AMES — In what can only be described as a tumultuous 24 hours in the wacky world that is college football, the AutoZone Liberty Bowl had plenty of options. Schools closer to Memphis than Ames, Iowa had made bold promises regarding ticket sales to the game.

However, the Liberty Bowl chose Iowa State to play Tulsa on New Years Eve based off of fan reputation and an investment in the Big 12 brand.

“They are looking at it as an investment in the future that in the new bowl arrangements maybe they can get an SEC – Big 12 partnership," Iowa State athletic director Jamie Pollard told Cyclone Fanatic on Sunday night. "It’s very, very important for the Big 12, for Iowa State and for the Liberty Bowl for us to come there in droves.”

Considering that Memphis is only a 9.5 hour drive from the Des Moines metro, Iowa State’s reputation as a good traveling fan base is on the line.

The Liberty Bowl anually features an SEC program going up against the Conference USA champion. Simple geography shows us that Memphis is an easy trip for most SEC schools that traditionally fill the historic Liberty Bowl Memorial Stadium. With the SEC out of the bowl’s equation in 2012, Memphis opted for a Big 12 program to fill its slot instead. Now, the pressure is on Iowa State to put fans in seats.

“This is the call to action for Cyclone fans," said Pollard. "They are used to having an SEC partner that comes there and buys tickets in droves because they are an hour to four or five hours away. This is our turn to kind of flex our muscles and show that we are just as good as those fans. I’m hopeful that we will knock it out of the park.”

Iowa State’s traveling performances of the past likely kept the Cyclone Nation from spending the holidays in a place like Shreveport this holiday season. Selling 10,000 tickets or more to the Liberty Bowl could thwart Iowa State into the Alamo Bowl or some other game in the future.

"This needs to arguably be one of our most attended bowl trips ever for us to ever have a chance to say, Alamo Bowl or somebody else take a shot on us," said Pollard. "We owe them a lot of gratitude for staying with us because they had other options. Other places had guaranteed a lot of tickets.”

Iowa State is doing its part. Tickets to the Liberty Bowl are $55. The university is only charging students $25 and subsidizing the difference.

Cyclone Fanatic will be offering a bus trip to the game that will leave Ankeny on Dec. 29 and return on Jan. 1. Keep refreshing our front page for details later today.