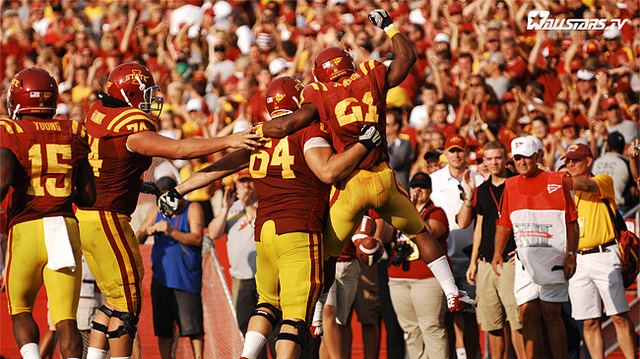 AMES — In the BCS era of college football, expect the unexpected. That indeed was the case within the Iowa State football program over the weekend when it comes to its bowl situation.

When you factored Oklahoma and Kansas State each winning their perspective games on Saturday combined with a Kent State loss in the MAC Championship Game on Friday, it seemed nearly unthinkable that Iowa State would wind up bowling in any city other than Dallas this holiday season.

But when the Big Ten Championship Game kicked off and Nebraska was throttled by Wisconsin on Saturday night, all plans were thrown out the window.

Luckily, Iowa State’s athletic director Jamie Pollard and head coach Paul Rhoads saw the potential for this to happen last week and immediately got to work. Iowa State will head to Memphis on Dec. 31 to take on Tulsa it the 2012 AutoZone Liberty Bowl – the exact game that the athletic department labeled as a best-case scenario, should it be kept out of the Big 12’s eight bowl tie-ins.

“We had worked really hard during the week to try to solidify the Liberty Bowl as the option if we were in the ninth spot and had done a pretty good job of that,” Pollard told Cyclone Fanatic. “The Liberty Bowl was vulnerable if we (the Big 12) got two teams up. So yesterday (Saturday) afternoon when it got to the spot where it looked like we’d get two teams up, the Liberty Bowl had to try to figure out how long they should stay with Iowa State. That was what over the last 24 hours what got touch and go. They had to protect themselves and we didn’t want to be a school that put all of our eggs in the Liberty Bowl and then got left out.”

To make a long story short, Iowa State knew that it wanted to end up in Memphis should the Cyclones be pushed out of the Big 12’s pecking order. What worked out great was the fact that equally, the Liberty Bowl wanted Iowa State and the Big 12 too for reasons of its own. Iowa State’s fan base has a great reputation for traveling well to bowl games and there’s an amount of prestige that comes with being in the Big 12 Conference.

Pollard and his staff were proactive last week, which is exactly what the Liberty Bowl appears to be doing right now. After next year, bowl tie-ins will expire and the new Big 12/SEC Sugar Bowl agreement will come into play.

“There is an opportunity for us to have some other bowl agreements in the future,” said Pollard. “Maybe the Liberty Bowl is one of them? I don’t know. Does the Big 12 and the SEC have the Liberty Bowl instead of another? Right now we have the Heart of Dallas with the Big Ten? Maybe it’s better to go to the Liberty Bowl with more history? This is a good trial run.”

The Liberty Bowl usually features an SEC program in its game. However, the SEC didn’t fill its bowl allotment this year, which opened up a spot for an at-large program, which obviously turned out being Iowa State.

According to Pollard, the Liberty Bowl was interesting in booking a BCS program to replace the SEC vs. Conference USA’s champion.

“That matters to AutoZone to have a Big 12 team, a BCS team,” said Pollard. “Keep in mind that we are replacing the SEC. They didn’t want to just replace it with anybody.”

— Other than Detroit, there isn’t a bowl game in America that is closer to Ames than Memphis.

— Iowa State has history with the Liberty Bowl. The Cyclones and legendary head coach Johnny Majors lost to Georgia Tech by a 31-30 final in 1972. The 2012 Liberty Bowl will mark the 40th anniversary of that game. Pollard said that the Liberty Bowl has offered an invitation for Coach Majors to be the grand marshal of the bowl’s parade on Dec. 30.

“Iowa State has great fans. They set an all-time season record for average home attendance this year at 55,275. This will be the closest bowl destination for Iowa State and their fans. We look forward t the Cyclones and their fans ringing in the New Year on Beale Street, which will have a huge economic impact for the Memphis Community.”