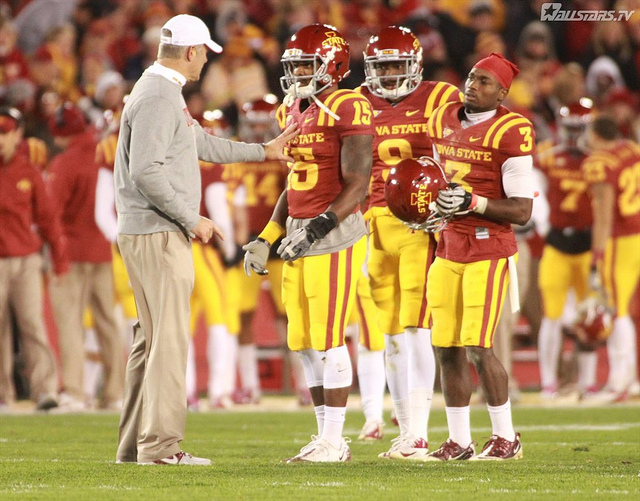 Here’s what we know regarding Iowa State’s bowl situation…

It’s still wide-open and a number of different things can still happen. However, the weekend did sure up a few things, the first being that Iowa State’s loss against West Virginia pretty much eliminated the Cyclones from going to the Buffalo Wild Wings and Holiday Bowls. The Holiday Bowl’s executive director basically called Friday’s game and elimination game shortly before kickoff inside of the Jack Trice Stadium press box.

So that’s that. Iowa State is 6-6. At 6-6, you basically have to wait and see how things fall into place.

The Cyclones caught a break yesterday when Oklahoma made a fierce 4th quarter comeback to beat arch-rival Oklahoma State. If the Sooners take care of business next week vs. TCU and Kansas State handles Texas, the Big 12 will more than likely qualify two schools for BCS games, bumping everybody else up one spot in the pecking order.

And that’s where things get dicey. How much does a school’s record/ranking in the conference actually play into this pecking order? It does to a point but when you get to the tail end of league selections, not that much.

Also ask yourself, could Iowa State dropping out of the Big 12’s bowl tie-ins and becoming a bit of a free agent if you will be a good thing in the long run?

Here are my projections after what we saw this weekend but keep in mind that based off of what goes down next week, things can and probably will change.

Again, this is all a toss-up for a few reasons. The first being the wildcard that is Baylor, a program that got its sixth win over Texas Tech yesterday. Baylor isn’t know for a great traveling fan base. BUT, the Bears would fill up the stadium in Houston. That’s why I have the Bears slotted there. Plus, they did just beat Texas Tech yesterday.

West Virginia and Texas Tech are both wildcards too. Tech has a 7-5 record but have been imploding over the last month of the season. The Holiday Bowl’s executive directors specifically said that he takes that into account before making a decision last Friday in Ames. I’d lean West Virginia but nothing would surprise me here.

It makes a lot of sense for the Pinstripe Bowl to push hard for West Virginia. It’s a former Big East school that would bring more fans to NYC than any other options. However, the Pinstripe is down in the pecking order and doesn’t have much say. How much do these bowls talk? Who really knows?

There’s also an arguement that can be made that the Pinstripe might rather invite Iowa State back than to roll the dice with a Texas Tech or Baylor. The Cyclone Nation did travel well to New York a year ago but at the end of the day, I don’t see that reunion being that positive of a scenario for either side.

For what it’s worth, CBS currently has Iowa State in the Heart of Dallas Bowl taking on Purdue. However, CBS has the Holiday Bowl taking Texas Tech instead of West Virginia.

And now for the elephant in the room…

What happens if Oklahoma or Kansas State lose next week and the Big 12 only gets one team in the BCS?

Either Iowa State or Baylor will likely play in a non-Big 12 affiliated game. There are a handful of options floating around out there. With Iowa State’s traveling reputation, the Cyclones would be a nice draw for somebody but we’ll just wait this thing out and burn that bridge when we get there.

At this point, I see Dallas as the most likely postseason destination for Iowa State but don’t book your plane tickets yet. A lot can still happen. 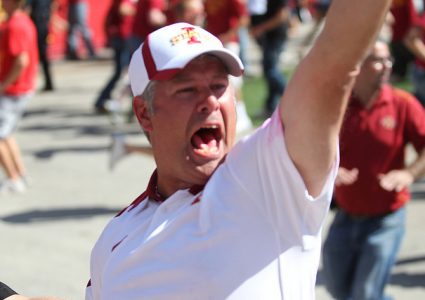