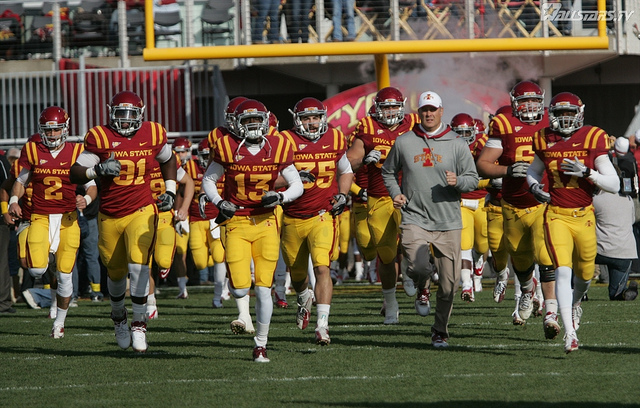 Kansas State @ TCU – We’re picking this game straight up because when I sent the picks out on Monday, no line existed due to the unknown status of Collin Klein. I’m a huge KSU guy. Have been since July. I’m not jumping off the bandwagon now. The Wildcats will win out.

Oregon State @ Stanford – The Cardinal have QB problems. OSU is undervalued because they are OSU. Give me the Beavers in a minor upset.

West Virginia @ Oklahoma State (-7.5) – I’ve been picking against West Virginia all season long. For the most part, this theory has been very, very good to me. I actually took WVU last week and they burned me. Fool me once, shame on you. Fool me twice? Won’t happen. OSU BIG by 17.

Kansas State @ TCU – Sounds like Klein is going to play this weekend.  That’s enough for me to pick the Wildcats.

Oregon State @ Stanford – Outside the USC-Oregon game last week, I haven’t watched too much Pac-12 football this year. With that being said, I like Stanford to get the W.

Purdue @ Iowa (-5) – Must win game for the Hawkeyes and Mr. $3.8 Million/year for that matter.  Don’t know if the Hawkeye faithful can sustain another dismantling loss at home to another lackluster opponent.  Remember the Chippewas of Central Michigan?  Enough with this pathetic analysis…I’m going with Iowa to cover.

Baylor @ Oklahoma (-20) – You would think Baylor has enough athletes to keep this game close but believe Oklahoma will pull away in the 2nd half.  Oklahoma.

West Virginia @ Oklahoma State (-7.5) – What a difference a month makes for Geno Smith and West Virginia.  Think I’ve picked them in every game this year despite losing the last 3 games.  Not going to change now.  West Virginia covers.

Iowa State @ Texas (-10) – Texas looks like they are hitting their stride and with this game in Austin, I like Texas by 2 TD’s.

Kansas State @ TCU – I’m going to assume that Kansas State will have Collin Klein taking snaps and so I will take the Wildcats on the road.  K-State 31-20

Purdue @ Iowa (-5) – Purdue looked like a legit team in the non conference but they have been awful in conference play and as bad as things are in Iowa City, they are worse at Purdue.  Iowa needs a win to keep their bowl chances alive.  I see this going a lot like the Minnesota game.  Iowa 27-14

Baylor @ Oklahoma (-20) – Oklahoma has lost 2 games at home this year.  They’d only lost 1 game the previous two years. I have a feeling that is being drilled into their head this week and they will want to make a statement.  Baylor’s defense will give up 50+ in this game and I don’t think they can score 30 on the road against this defense.  OU 56-28

West Virginia @ Oklahoma State (-7.5) – Questions as to who starts at OSU leave me leaning towards WV.  Brent Blum’s team has done what most thought they may heading into their first big 12 season….struggled.  I’m not sure they win, but I’m going to say they cover.  41-38 OSU

Iowa State @Texas (-10) – Texas is soft.  Very very talented but soft. This game is there for a win if Iowa State can hit them in the mouth early and win some battles up front.  I just worry about Texas ability to run the ball and win the time of possession game.  Texas 31-17

Kansas State @ TCU – It doesn’t take a Heisman candidate to beat TCU.  If Klein plays or not, Wildcats win.

Oregon State @ Stanford – This should be a great game, but Stanford upsets at home.

I’m making these picks from the Denver airport, so if they go poorly I’m blaming the cloud of suck coming from Boulder.

Kansas State @ TCU – K-State has one freaking turnover through the entire conference season. I have a feeling an opportunistic TCU defense comes up with a couple. TCU 30 K-State 27.

Oregon State @ Stanford – Oregon State has been celebrating all road victories by going to an In-N-Out Burger after the game. Iowa needs one of these, I think it could be a huge boost to recruiting. No burgers for the Beavers. Stanford 27 Beavers 21.

Purdue @ Iowa (-5) – Some kid in the airport just walked by with a leash on. I imagine that’s how Iowa A.D. Gary Barta feels sometimes. Iowa 28 Purdue 20.

Iowa State @ Texas (-10) – Tough time to catch the Horns as they are playing with confidence again. But they are a banged up group, Cyclones definitely will make it a battle. Just not sure the Clones have the weapons. Texas 30 Iowa State 28.

Oregon State @ Stanford – I’m not a huge believer in the Beavers and all of their close wins. I’ll take Stanford at home.

Purdue @ Iowa (-5) – I mean, Iowa will win, right? Purdue is lots of bad but you have to wonder about Iowa and their recent performances. For some dumb reason I’ll again go with Iowa to win and cover.

Baylor @ Oklahoma (-20) – My first inclination is to take Baylor because you’ll know that they will at least score points. But they only scored 21 in Ames and the Sooners have a better overall defense. The Bears defense is no bueno, Sooners cover.

West Virginia @ Oklahoma State (-7.5) – I have no idea who is playing quarterback for the Cowboys this week for certain, but each QB has done reasonably well in their time this year. It appears the Mountaineers are sliding down the slippery slope and I don’t think they’ll get back on track in Stillwater.

Iowa State @ Texas (-10) – I think this is a winnable game for the Cyclones but the Longhorns have come on strong in the past few weeks. Their first play that will be out of the wishbone has me terrified for some very irrational reason. Texas has one of the worst run defenses the Cyclones will see this year (worse than Baylor at 4.99 yards per carry but not worse than Kansas). I have yet to pick against the Clones yet this year (I think), so I’ll do it here and hope like heck to be wrong.

Purdue @ Iowa (-5) – Purdue is BAD.  Then again Iowa isn’t much better. I expect the Hawks to win but doing so by five might be to much to ask. I’ll take Purdue.

West Virginia @ Oklahoma State (-7.5) – WVU is in a tailspin after winning their first five games. Welcome to the Big 12.  Ill take OSU

Iowa State @ Texas (-10) – I’d love to take ISU but I think the smart play here is Texas.  Still not convinced by ISU’s offense when they play vs a good team or on the road. That’s a double negative and in this case it doesn’t make it a positive.

Oregon State @ Stanford –  Not a big Beaver believer. I mean, I believe in Beavers but not of the Oregon State variety. Stanford Trees.

Iowa State @ Texas (-10) – ISU often seems to play better on the road. I hope this is one of those weeks. Not going to pick the Cyclones to win but I’ll take them to cover.

Kansas State @ TCU – Collin Klein plays but not a lot. This is going to be a hard fought game where the Wildcats rushing attack gives them the edge and they win by a TD. Also, bodes well for K-State that TCU is coming off an emotional win in Morgantown last week, let down city.

Oregon State @ Stanford – As a college football fan, I love watching the late PAC 12 games on Saturday night.  Therefore, I have seen Oregon State multiple times this year and they have a very good football team.  Although the game is in Palo Alto I like this Beaver football team, Stanford really struggles throwing the football when they need to, if the Oregon State defense can limit Stanford’s rushing attack it is their game to win.

Purdue @ Iowa (-5) – This has to be the week for the Hawks, they put it all together and beat the Boilermakers by two scores. A year makes quite a difference, not having Marvin McNutt has really proved to be this teams downfall, no big play guys what so ever.

Baylor @ Oklahoma (-20) – This is the time of the year when OU really begins to put it on teams week in and week out. I definitely think Baylor sees their demise this season and get thumped in Norman.

Iowa State @ Texas (-10) – What a tough time for the Cyclones to go into Austin, loss of Jake Knott and coming off a home loss to OU. However, the let down factor is in effect, UT went on the road and beat up on the Red Raiders last week.  I think Texas comes out flat and the Cyclones keep this game tight.