Across college football, coaches use bye weeks to catch up on recruiting. We thought we’d do the same here today at Cyclone Fanatic.

To begin, let’s all CLICK HERE and take a look at our new scholarship chart page at Cyclone Fanatic.

According to the chart, Iowa State has 21 seniors who will move on from the program at the end of the 2012 season. Add one scholarship from former linebacker (he never actually made it to the start of the season but his scholarship still counts for this year) Adam Pavlenko and the count is up to 22 open scholarships to fill in the 2013 class.

In addition to that, we all know that others will drop off at some point between now and the first Wednesday in February. Let’s just go with two as a magic number and project that Iowa State will have 24 scholarships to fill (give or take a few of course).

At the present time, Iowa State has a good chunk of its class completed with 17 known verbal commitments.

NOTE: Nothing you read in this article is to be taken as a stone cold fact. It’s simply a projection based off of knowledge at hand. Coaching staffs always have a plan – a plan that the public usually doesn’t know anything about. This is meant to simply be a guide to the casual fan as to where the program is currently at in its 2013 recruiting efforts.

Here is a look at who we know is exiting the program by position, along with known verbal commitments in the class of 2013.

*** That 11 of Iowa State’s 17 commitments are offensive football players. For now at least…

*** Here’s the current 2013 commitment list broken down by state:

*** That according to this chart, it’s safe to assume that much of the remaining recruiting efforts will go towards the defensive front seven. Iowa State is losing four interior defensive linemen and has yet to pick up a commitment at that spot. The line as a whole is losing five players, with one commitment coming in. However, consider that four defensive linemen are currently redshirting. Seven defensive linemen are currently classified as freshmen in the program. The cupboard is far from being bare up front. Regardless of what happens on the recruiting trail between now and February, it’s safe to say that young talent will need to step up on next year’s defensive line.

*** With the loss of Pavlenko at linebacker and counting the addition of Mills, Iowa State is projected to have only six scholarship linebackers in its program next season. Adding a few more linebackers to this class wouldn’t be shocking at all.

*** If you take a close look at the current scholarship chart, you’ll see that the young talent in Iowa State’s program is spread out fairly equally. Defensive end and linebacker are the positions that stand out from a lack of depth standpoint.

*** As is the case with every football recruiting class, a number of these prospects are tweeners, meaning that they have the ability to play multiple positions at the next level. So just because this current chart lists two verbal commitments at quarterback as an example, it doesn’t mean that both men will end up at the position. You know the drill… 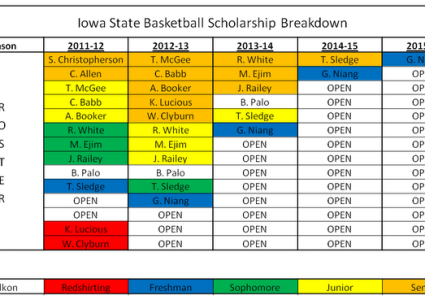