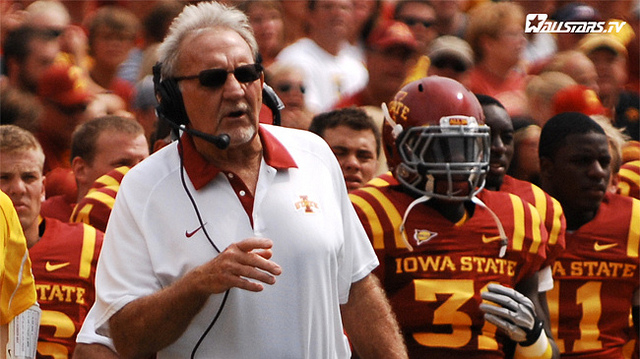 I was hanging out with some friends in the lobby of the Iowa State team hotel Friday night when Cyclone defensive coordinator Wally Burnham walked by. Our group had just returned from a solid evening out at the local Chili’s (we only do it big on the road), where we took advantage of the two-for-one drink special while watching Utah lose to Utah State (the Utes apparently really miss Shaky Smithson). Needless to say, we were all in good spirits.

Anyway, Wally was sauntering by when someone in our group hollered at him half-seriously, "Hey Coach, I’m expecting a shut-out tomorrow." Wally took a glance at us and replied in his typical old-school fashion, "I’d be ok with that."

No shut-out, but I bet Wally was more than ok with the result the next day.

The six points Iowa State allowed were the fewest scored by the Hawkeyes in a home game under Kirk Ferentz. Impressive on its own, but consider the Cyclones needed every single stop and it becomes an even more historical performance.

In the last 15 years of the Cy-Hawk series, there have been some memorable games: the Seneca game, the Shaggy game and of course last year’s Steele Jantz special. The 2012 meeting will go down in the annals as the Wally game; with a big assistance from his star pupil Jake Knott. Two men that are 50 years apart in age, but forever linked by the tipped pass heard round the state.

Let’s rewind to December 2008. When Paul Rhoads was announced as Iowa State’s new head coach, Jake Knott had just wrapped up his senior season at Waukee.  Knott held only one BCS scholarship offer: a partial baseball scholarship to play at Iowa. He had zero BCS football offers.

As the legend goes, one of Rhoads’ first actions as head coach was to scour central Iowa to find talent that had fallen through the recruiting cracks. When he inserted tape of Knott, Rhoads kept asking himself, "What am I missing here, this kid has all of the tools." On his way home from a visit to UNI, Knott got the call from Rhoads he had been hoping for. As Knott told the Cedar Rapids Gazette, “I don’t even think Coach Rhoads got done with his sentence. Right when he said, ‘We’re offering you a scholarship,’ I said, ‘I’m committed."

It was one of the two best "under-the-radar" calls Rhoads made that winter. The next month, Rhoads was busy trying to fill out his staff. The message boards where a buzz over the acquisition of the young, hot-shot offensive coordinator from Rice. Tom Herman was a rising star in the coaching profession. When Herman was announced as the new offensive coordinator, there were over 200 message-board posts here on Cyclone Fanatic praising the move. Weeks later, Rhoads hired Wally Burnham. The selection elicited a far meeker reaction on Fanatic: only a couple dozen posts, including one asking, "How old is Gramps?"

He was 67 then. He is 70 now and the mastermind behind one of the finest defensive performances in Iowa State history.

Knott had the signature moment, but it was a cavalcade of plays from the entirety of the Cyclone defense that led to Iowa State’s first win in Kinnick in a decade.

Everyone knew that Iowa’s game-plan was to establish the run, control the clock and beat-up Iowa State with their monstrous offensive line. It has worked for 13 years for Ferentz and company and eventually doomed Northern Illinois in week one. But Iowa State was not cooperating. Iowa finished with 28 carries for 68 yards, the Cyclones owned the key battle up-front. Iowa State was so dominant that Damon Bullock’s 15 yard run in the third quarter was the only Hawkeye rushing attempt that went over EIGHT yards the entire game. So much for a soft defensive line.

Time after time the defense was put in a perilous position. It was as if the Cyclone offense wanted to make things more challenging for the defense by not knocking the Hawkeyes out. It reminded me of playing the video game Donkey Kong back in my youth. Level one is too easy, defense? How bout we throw some more barrels at you by turning the ball over four times. Oh you think you are good? Try stopping the Hawks with a first and goal at the three. Nicely done, now the final challenge:  1:56 on the clock, Hawks have the momentum, you are running on fumes, Vandenburg in a rhythm and 70,000 on their feet; give up a field goal and we go to overtime, give up a touchdown and it could be a loss of devastating proportions. Now go make a play.

Every single occasion, Wally’s crew stepped up and delivered.

When Burnham took the job in 2009, Iowa State was coming off arguably their worst defensive season ever. They gave up an astronomical 42 points and 500 yards per game in conference play in 2008; which put them 112th nationally in total defense.

Yet steadily under Wally, the defensive unit is growing into one of the best in the Big 12. (Yes I know being the best defense in the Big 12 is akin to being the most normal family in the show Teen Mom, but hang with me.)

Dating back to the Texas Tech game last year, Iowa State has held its last eight opponents to 30 points or less in regulation: the only Big 12 school to have an active streak that long.

During the stretch, the Cyclones held high-powered offenses Oklahoma (26 points) and Oklahoma State (24) to their lowest regulation point totals of the conference season in 2011. And limited Texas Tech to seven points in Lubbock; the first team to hold the Red Raiders to seven points or less at home in 11 years.

Thanks in large part to this defense, in three plus years, Paul Rhoads and Wally Burnham now have 20 wins at Iowa State. They have been favored in only eight of those wins. They continue to thrive as the consummate underdogs, which suits Wally just fine.

It is likely Wally Burnham will be at Iowa State until he decides to retire. As sharp as he is, hopefully that is a long-time from now. He is a man that once played for legend Bear Bryant at Alabama and coached alongside another legend  Bobby Bowden at Florida State. I’m guessing Wally Burnham doesn’t aspire to have the same "legendary" status, he’s just a football coach going to work every day. Much like Jake Knott and the rest of the defense, he never seeks the spotlight, he just grinds.

The 2012 Cy-Hawk game was the ultimate grinder. I’m glad we had Wally and crew on our side. 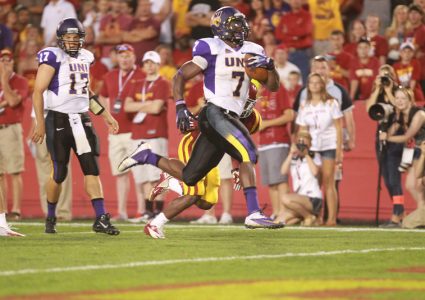