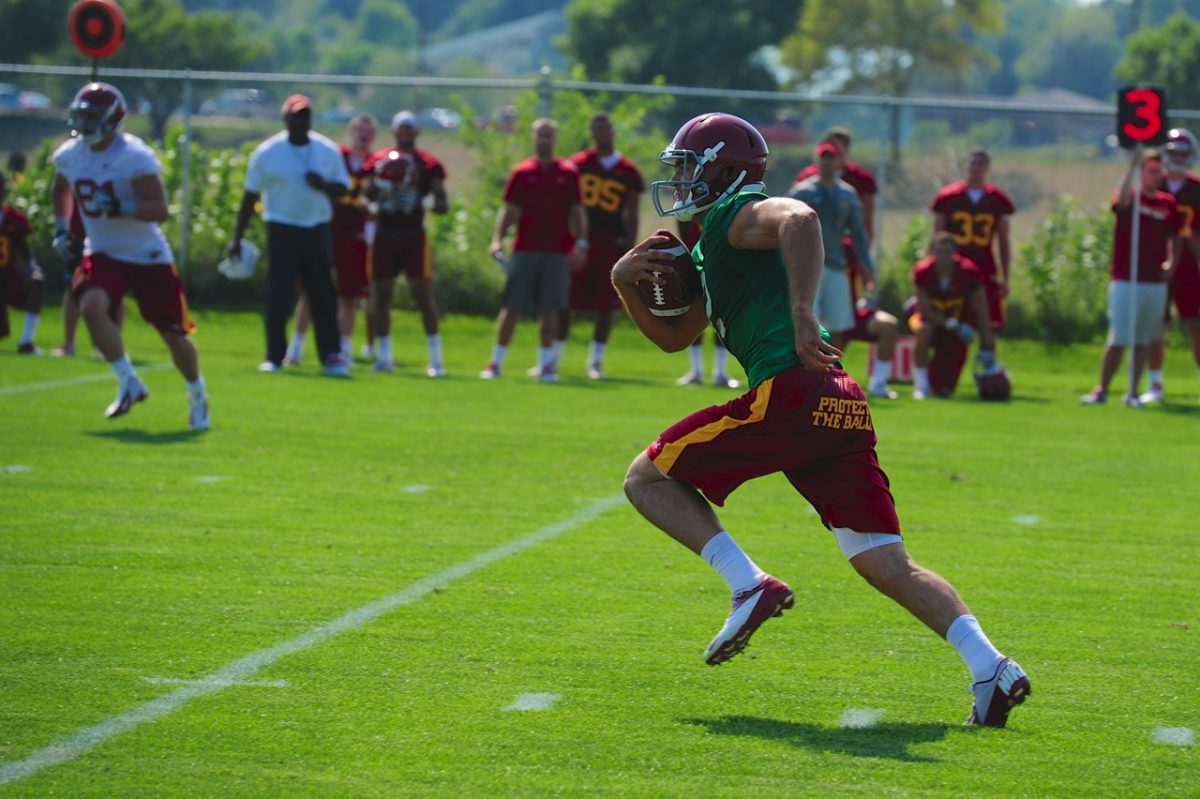 Full disclosure: I’ve got a lot on my mind right now. All week long we’ve been making tweaks to the new site (I hope you like it). Jeremy Lind has been busting his behind working on the forums. I’ve been doing a lot of planning and facilitating for the upcoming seasons at Cyclone Fanatic. We had a new full-time employee start this week…

Been busy. Good, but busy.

Now obviously, we’re almost exactly a week from the 2012 football season. A starting quarterback has been named. There’s a lot to talk about!

Here are some quick hits, sort of a Monday Musings, Thursday edition if you don’t mind.

— I took this note last week…

Now unless you’ve ever covered the Cyclones, you’ve never experienced “the wait.” “The wait” is what us media folk refer to as the time we arrive at the Jake to do football interviews compared to the time that Coach Rhoads and the team actually get there.

But last week, my friend Paul Clark from Cyclone Report pointed something out. That’s the fact that Brock Dagel, a redshirt freshman offensive tackle, looks like a monster. The dude is huge. He’s a guy who in August passes the “eye test” with no questions asked. For those wondering, Dagel is currently listed as a backup left tackle behind Carter Bykowski, who is also a mammoth of a man.

— Speaking of Bykowski, I’m sticking with my guns that he’s got the potential to be selected in the 2013 NFL Draft. Folks I’ve talked to are very high on this young man.

— I think that Iowa State’s secondary is the most underrated position group on the roster. Free safety Jacques Washington hasn’t gotten much ink this summer but he’s a legitimate All-Big 12 candidate in my mind. I’m also high on Durrell Givens. Having said that, I won’t be shocked to see Deon Broomfield take the field in some guaranteed passing situations for this defense either. He’s had a great couple of weeks I’m told.

— A position that I’m not sold on yet for the 2012 Cyclones is defensive end. I think that Roosevelt Maggitt will be okay coming off of a knee injury. Willie Scott can be productive but he’s only 231 pounds. David Irving is RAW like the WWE. This line really needs a guy like Morrissey to emerge as a legitimate threat this season.

— An offensive player who is due for a breakout season? Oh yeah. That man is wide receiver Jarvis West. Take it to the bank.

— A week from the season opener, one of the great mysteries surrounding this team is how redshirt freshman running back DeVondrick Nealy will be used – if at all. There’s so much depth in front of him. Will he jump over one of the juniors and snag some playing time? Will the staff create ways to get him touches? Is he that good or is it more hype than fact? I’m excited to watch this kid play. I’ve heard a lot of great things…

— After Josh Lenz and West, I really have no idea of what to expect from Iowa State’s wide receivers. I really don’t. Aaron Horne is coming off of an injury and hasn’t been hit all summer long. Albert Gary has the legal issues. The three freshmen are three freshmen and Jerome Tiller is a converted quarterback. Flip a coin.

— Another one of the big mysteries heading into next week is due to the recent emergence of linebacker Jeremiah George. According to Wally Burnham, George has been so good lately that it is going to be hard to keep him off of the field. How will Iowa State use George against teams running a spread offense? What does Wally “The Wizard” have up his sleeves? George’s emergence along with that of Deon Broomfield gives Burnham a ton of options to work with.