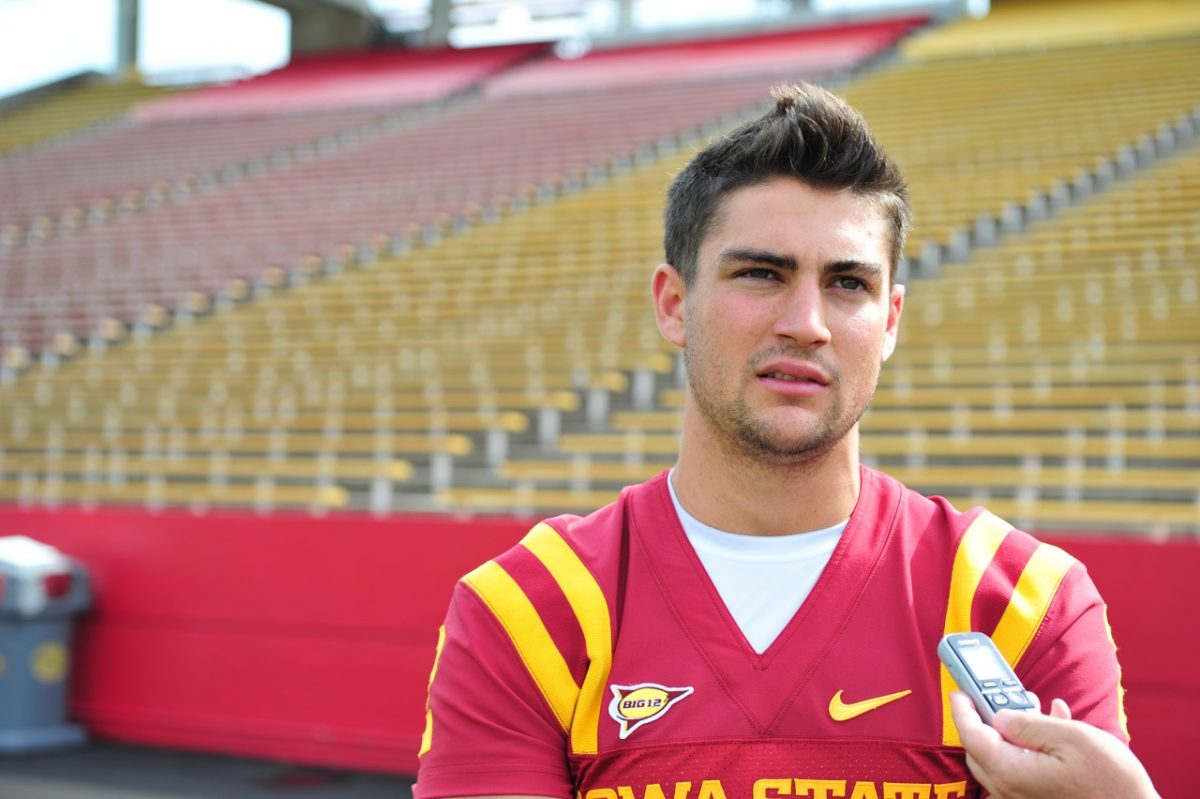 Steele Jantz, a dynamic senior who dazzled the Cyclone Nation with a four touchdown – 300-plus total yard performance in a triple-overtime win over Iowa last season, won the battle. According to Rhoads, Jantz has improved in nearly every aspect of the game since this time a year ago. But so has the man who slayed No. 2 Oklahoma State a season ago, the steady one, Jared Barnett. It’s hard to leave redshirt freshman Sam Richardson out of this conversation.

“If you have two quarterbacks, you really don’t even have one.”

I’m sure that you’ve heard that one before right? In fact, you might have even said it a time or two. That’s a cliché’ folks.

I’m not a football coach but I can only imagine that having two guys who have proven they can win at a high level is better than one a the most important position on the field.  But we all know that only one man can start a football game at the quarterback position. So why go with Jantz? One Paul Rhoads quote from Tuesday really stood out to me.

“As an ex-defensive coordinator, it’s scary when a quarterback takes off and ad-libs,” said Rhoads. “Whether it is via scramble and throws or via scramble and runs or what he can do with a designed run of our offense. Steele is a threat. There’s no question about it. He is a threat because he is fast and has good size. I didn’t think that he was a great runner a year ago. I think that Coach Messingham has addressed that issue and I think he is a better runner now.”

It’s that whole, “as an ex-defensive coordinator thing.”

Think about this situation that way. Put yourself in Tulsa defensive coordinator Brent Guy’s shoes right now. You’re less than two weeks away from a road trip to Iowa State. It’s time to start putting together a game plan. Which Iowa State quarterback scares you more? Which Cyclone is a harder guy to game plan for?

In my mind, the answer to that question is Steele Jantz, a man who’s football career has been anything but easy. He broke his leg in high school. Jantz walked on at Hawaii but ended up at a junior college in California. Then he came to Iowa State, won the job, injured his foot, lost the job and then magically appeared by literally coming out of Iowa State’s bullpen in Yankee Stadium on a balmy December evening.

Since then, the Barnett vs. Jantz question has littered our forums here at Cyclone Fanatic and on local sports talk radio. Even today, many don’t agree with Rhoads’ decision to give Jantz the nod. Things have never been easy for Steele Jantz. He’s motivated by that and so much more.

“So here he is in his final go-around at this level and he is certainly a guy who aspires to keep playing this game beyond his college career,” said Rhoads. “There is a lot of motivation for him.”

UP NEXT: And now to the obvious question…This was obviously a tough decision for Paul Rhoads to make. Here’s your que Cyclone Nation….

“Now that Jantz has won the job, will he keep the job?”

“I informed them that I don’t have a hook that I’m ready to use in the Tulsa game. But it’s a position that will be evaluated every week just like every other position,” explained Rhoads. “Tom Farniok is a redshirt sophomore and appears to be a guy who will be a four-year starter for us but he’s going to have to keep proving it on the field, otherwise he’ll lose his position. The same will be true with Steele.”

Jantz might have been named the starter for week one but that appears to be it.

“If one is not performing well, we’ve got another guy who has led us to multiple victories and have an opportunity put him in,” said Rhoads.

In fact, the head coach even mentioned the possibility of Barnett seeing action in week one, much like the Jerome Tiller/Austen Arnaud experiment back in 2009.

“We don’t plan on having a rotation. In an ideal world Steele would take this job and run with it and be our starting quarterback for 13 games this season. Don’t have a crystal ball to see if that will be the case but that would be the ideal situation,” said Rhoads. “I haven’t decided yet if I will play JB in that opener, similar to what I did with Jerome Tiller back in 2009, just to get him out there on the field and get his feet wet verses other competition and not just the people he has seen in practice. I may do that. It doesn’t mean that I’ve got two quarterbacks that I want to continue to roll with, it’s just that I’d want to get somebody game experience in the opener against a different opponent than his own defense.”

THE PERFECT BACKUP: Shortly after Iowa State sent out its press release naming Jantz the starter, I recorded THIS VIDEO just outside of the Jacobson Building. In it, I referred to Barnett as the “perfect backup.” Please don’t take that comment out of context. What I mean by that is that Barnett is as mature of a football player as I’ve seen roll through Ames since Austen Arnaud. In fact, he reminds me of a young Austen every time I talk to him. He’s well liked by his teammates. Most importantly, Jared Barnett has proven that he can be a spark off the bench before.

Am I worried about Jared Barnett pouting in regards to not winning the job? Not a bit. Neither is Paul Rhoads.

“You really don’t have to tell a guy like Jared Barnett anything because of his maturity level,” said Rhoads. “The whole football team has seen it play out on the field. Jared had an idea that this was probably going to be the decision based off of what has happened. It serves as motivation to him. He knows he has to got to be ready. He saw what happened last year and the opportunity that was provided to him and he’ll approach his job that way as we move forward with practice.”

RICHARDSON: On Media Day, Rhoads told reporters that this would be a three-man quarterback competition with redshirt freshman Sam Richardson being in the mix as well. Richardson obviously didn’t win the job but he did open the eyes of many (including the man writing this piece) over the last two weeks of camp.

“He performed well. He threw the ball very well,” said Rhoads. “I think that his inexperience showed and his aggressiveness with the other 10 guys on the field given that opportunity – that’s part of the growth and maturing process. I’m very pleased with Sam and I told him about four days ago, ‘if you have to go on the field for whatever reason Saturday against Tulsa, I wouldn’t bat an eye or be scared at all.’”