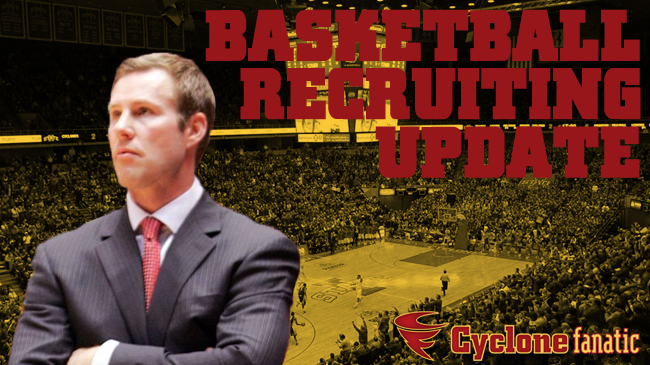 The final live weekend of the summer finished up Sunday evening, which marks the end of AAU season for most teams on the circuit. It also marks the end of a summer on the road for coaches around the nation, who will now be back in their own gyms practicing for the upcoming season. Recruiting will continue though – texts and private messages to recruits daily along with an occasional old-fashioned phone call mixed in as well. The Cyclones staff hit up several events this weekend: Live in AC, KC Prep Invitational, Caribana Classic, Las Vegas Fab 48, Adidas Super 64 and more.

The only known new offer at this point is another 2013 big man, Kentan Facey of New Rens (NY) AAU program who was offered on Sunday by the staff. You may recognize that AAU team, Facey’s teammates include 2013’s Terrence Samuel and Shamiek Sheppard who Iowa State has had a known interest. It’s likely that the staff has spoken to Facey several times in the past while they were scouting Samuel and Sheppard and finally offered after this weekends’ showing at the Fab 48. Facey has had a huge summer, having only a handful of offers coming into the AAU season now garners over two dozen offers including many high majors. He is originally from Jamaica and played soccer exclusively until he was 14, meaning it is only his third year on the basketball court and while still having some learning to do his athleticism and length show big potential.

The two current commits of the 2013 class had big weekends, with Monte Morris helping the Michigan Mustangs reach and win the Super 64 championship. Matt Thomas and the Wisconsin Playmakers may have only gone 2-2 while playing at the Fab 48, but Thomas once again put on a shooting display that had all of the scouts talking. In fact, Matt Thomas received big publicity from ESPN’s Dave Telep in a Sunday morning article ($) where he raves on his shot and gives a quick background on why Iowa State. Thomas had games of 26 points and 24 points in pool play with his impressive outside shooting, ball-handling and defensive play earning praise.  From the sounds of scouts, his ranking will undoubtedly rise across the board when released over the next few weeks.

Morris had games of 22 points, 26 points and 16 points (championship) along with others this weekend as the Michigan Mustangs took the crown of Adidas National Champs at the Super 64. Morris used his quickness and overall speed to score off the drive and on fast-breaks for the Mustangs, and also earned All-Tournament honors in the process. Don’t be surprised if Morris slides up a few spots in the next rankings.

2013 JuCo Dustin Hogue (Indian Hills CC) played at the Las Vegas Showcase this past weekend and has garnered at least one more offer, Washington State. Both Iowa State and Iowa have offered, while several other schools are also interest.

2013 forward Hassan Martin and the New Heights team were also at the Las Vegas Super 64 and made their run to the championship game to face off against the Michigan Mustangs and Monte Morris. Martin had 10 points in the championship game loss, but continued showing that he has big potential. Martin has said that Iowa State, Rhode Island and Providence are likely the top on his list at the moment. Rhode Island appears to be the program that is recruiting him the hardest.

2013 small forward Byron Zeigler recently indicated that Providence, Iowa State, Eastern Michigan, Iowa, Michigan and Dayton were the schools recruiting him the hardest. Zeigler and the Michigan Hurricanes competed in the Fab 48, going 3-0 in pool play with a 28 point and 10 rebound performance before losing in the first round of bracket competition. He recently indicated that a trip with his coach to Ames is likely in the future.

2013 power forward Kyle Washington will begin to trim his list over the next few weeks and Iowa State appears determined to make that list. Head coach Fred Hoiberg watched Washington during the first day(s) of the live period as the Howard Pulley Panthers playing in the KC Prep Invitational.

A host of other 2013 will also begin to trim their lists over the coming weeks. Martez Walker said last week that he will visit Tennessee, Rhode Island, Xavier & Iowa State with the completion of the live period. Vitto Brown listed offers from Wisconsin, Kansas State, Minnesota, Iowa State and Nebraska among others, saying he plans to visit Wisconsin, Minnesota and Kansas State at this time. Reggie Cameron said he will cut his list down to seven or eight in the coming days, then begin planning visits.  Others doing the same will quickly give a view into how the remainder of the 2013 class will shape up.

2014 power forward Abdul-Malik Abu says he will take unofficial visits to both Connecticut and Iowa State in August. Abu has already visited Providence, Rhode Island and Boston College.  Providence is definitely a college to watch in the recruitment of both Abu and teammate Jared Terrell, who say they would like to play college basketball together, Ed Cooley and company did not miss a single AAU game during the live periods this past month that featured Abu and Terrell.

2014 prospect Reid Travis had another great weekend with the Minnesota Pump N’ Run team, advancing to the semifinals at the Super 64 before losing by a point to the Michigan Mustangs (Monte Morris). Travis had big games, including a 29 point and 10 rebound performance during the tournament run. Rivals analyst Eric Bossi “really like the combo guard out of Minnesota” and says he will be ranked in the next 2014 rankings. Travis has made himself arguably the third best player in Minnesota in the class, behind Tyus Jones and Rashad Vaughn.  Iowa State staff watched both Vaughn and Travis this weekend. Vaughn was his usual self, nailing shots outside from NBA range and being described by scouts as being on a level all is own.

2014 prospect Isaiah Whitehead indicated this weekend that he wants to take unofficial visits to both Arizona and Syracuse. He also said that UCLA, Kentucky and Syracuse are the teams that stand out at the moment but the teams that he is hearing from the most are Connecticut, West Virginia and Iowa State.

2014 Darrell Davis led the REACH Legends 16U to the championship game out in Las Vegas at the Fab 48 with performances of 23 points and 21 points among others.  Davis at the moment is an unknown to most, but watch the name closely.

2015 big man Henry Ellenson is quickly becoming a highly sought-after player, with Wisconsin, Minnesota and Iowa State all watching him closely. Georgetown is another that has offered and Purdue appears that they are interested as well, look for Ellenson to continue to rack up offers.

Look for a lot of action in the coming weeks when it relates to the 2013 class, and Recruit Lists will have all of the latest! So be sure to follow on Twitter or Facebook.