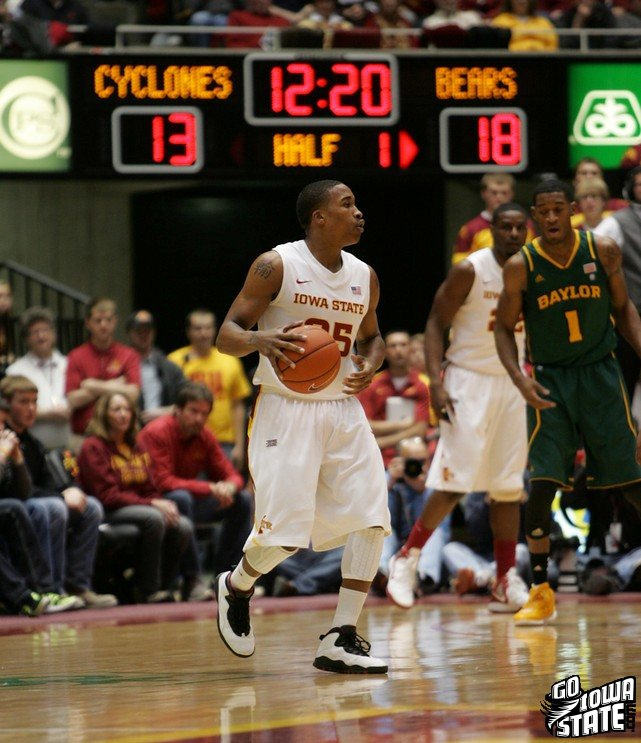 Monday Musings are now being brought to you by Adam Gray Insurance – a Nationwide Insurance agent based out of Johnston. Did you just graduate from college? Everybody needs insurance. Why not support a Cyclone Fanatic? Give Adam Gray a call today at 515-299-0536.

Chris Williams is on a well-earned vacation this week, so he handed the keys to the legendary CycloneFanatic Monday Musings to me. He gave me no real guidelines, so this could go about anywhere, hop on for the ride as we take a look at the recent happenings in Cyclone athletics.

So what did we learn this summer? These would be the three major headlines in my book:

-Will Clyburn has the potential to be a prolific scorer during his senior year.

-Georges Niang is ready to contribute in the Big 12 right away.

-Expect Naz Long to get serviceable minutes as a true freshman.

Everything else was fairly status quo. The good news for Cyclone basketball fans is there were no Eric McKnight situations. We all remember McKnight—the lanky forward who had some hype when coming to Ames in 2010, but never amounted to much before transferring out of town. McKnight looked several steps behind the rest of the Cyclones when he played in the Capital City League the summer before his freshman year. He was never able to catch up during the regular season.

This year the newcomers looked like they belonged at the BCS level and all had flashes of play that should make fans very encouraged for the future of Cyclone basketball.

Several Cyclones are busy trying to impress NBA executives during the NBA Summer League held in Las Vegas.  Royce White is the headliner of course, but former Cyclones Scott Christopherson, Diante Garrett, and Jake Anderson are on squads as well. And former, former Cyclones LaRon Dendy and Justin Hamilton are also on rosters in Vegas.

White is off to a slow start in his initial Rockets action. In two games he has averaged five points, two rebounds and one assist. But it is no time for panic. White’s game isn’t exactly conducive to putting up large numbers in the one-on-one based summer league game. But keep your eye on the Rockets, they have been making moves like a drunken dude who is angry at his fantasy team. They are still trying to get their hands on Dwight Howard and are making everyone on their roster available to get him. While I believe Royce White will still be a Rocket come NBA training camp time, anything is possible with Rockets GM Daryl Morey.

Diante Garrett took advantage of his minutes to put up a solid line of eight points, 10 assists, four rebounds and two steals in his debut with the Suns summer league squad. It will be an uphill battle for Garrett to make the Suns as they drafted UNC’s Kendall Marshall and also signed Houston PG Goran Dragic to a long-term deal this off-season. (Marshall didn’t play in the 1st summer league game, thus DG’s large minutes.) Garrett will have to beat out NBA veteran Sebastian Telfair to make the roster and that is a long shot. But players like Garrett are not just playing for their respective summer league teams, every other NBA team has scouts in the building to assess the rest of the talent. I would be shocked if Garrett didn’t go to training camp with an NBA team. From there, he would at least have a chance.

Scott Christopherson didn’t see any minutes in the Trail Blazers 1st summer league game last night. He was one of five players on Portland’s squad who didn’t see the floor. This isn’t uncommon, as Portland was playing their headlining players big minutes. Expect Christopherson to see more time towards the end of the summer league schedule. He has little chance of making a team, but can use the opportunity to impress European teams and make a great living overseas if he so desires. He also would be a prime candidate for the D-League if he wants to stay in the states.

Jake Anderson gets his summer league started with the Chicago Bulls tomorrow. He also is unlikely to make a roster come October, but good to see Uncle Jake get some run.

This is always my favorite part of  Monday Musings because Williams always throws out a statement or two that boggles the mind and leaves you as the kids say, "SMH." I will do my best to do the same.

-I took the lady friend to Biaggi’s in West Des Moines over the weekend. (I know, l know, big spender.) Now, I am not one to mistake Biaggi’s for some five star restaurant in NYC, but it’s not Fazoli’s either. I walk in and the first patron I see is a dude in an Eric Church t-shirt and jean shorts. While waiting for a table, a ‘fella in an Eli Manning jersey and sweat-pants walks by. And not to be out-done, a gentlemen in the next booth over had a T-shirt with a giant wolf plastered on it. All he needed was a fanny pack and a Zach Galifianakis beard.  It was some good scenery.

-This is always the slow time of the year in sports, so we all have to find something to occupy the time. When not watching the St. Louis Cardinal bullpen implode, I will flip on Big Brother on CBS. Hard to believe this show has been on for 12 years in the United States. I’ve got my money on Shane to win it this year if anyone cares– and assuredly nobody does.

But I got to thinking, if the Iowa State athletic department got locked in a Big Brother house, who would come out on top?  Paul Rhoads, Bill Fennelly and Kevin Jackson would be the outspoken members of the house and would ruffle the most feathers. I could see them making some sort of alliance of bros and out-muscling the rest of the house. Fred Hoiberg and Jamie Pollard would be your strategic game-players, playing both sides of the fence and crafting every decision. Volleyball coach Christy Johnson-Lynch and Gymnastics coach Jay Ronayne would be everybody’s friend and make no enemies because they are two of the nicest people on the planet.

This is a tough call, but I think I have to go with the Mayor to get the win. He is obviously a great athlete and could handle the physical competitions. Plus, everybody likes Fred so it’d be tough to get a consensus to vote him out if he’s on the chopping block. And as he has shown on the recruiting trail, he can close the deal and be quite the salesman if need-be.

Cyclones.tv needs to make this happen, if only because John Walters would be a great Julie Chen.

-That Gotye, "Somebody That I used to know" and the Fun, "We are Young" tune are battling to the death for song that gets stuck in your head and won’t leave. Now they are probably both in your head, I apologize.

-I usually scoff at people on the internetz and radio that promote sponsors because it usually seems very contrived. Nobody is telling me to do this, I’m just keeping it real as the young’uns say. This past week I was leaving my day-job when some lady decided she wanted to play demolition derby with my Pontiac G6. I was turning left when her car ran a light and broad-sided me, turning the front-end of my car into a pile of scraps. Luckily everybody was ok, but my car was obviously not. Getting in a wreck is not enjoyable and can be very unnerving –unless you are Danica Patrick, who may be used to it by now. I was pretty rattled as this was the first time I had been in an accident. After talking to the police, my first call was to Adam Gray (the insurance man who sponsors these musings). Gray went above and beyond to get things squared away for me on the insurance side. He made an extremely stressful situation a little easier to handle. It’s hard to put a value on that and I am extremely appreciative for his time and effort.

-Thanks for reading fanatics, stay cool out there! Oh and a freindly reminder we are less than 50 days away from Iowa State-Tulsa at Jack Trice. This video always gets me pumped up: