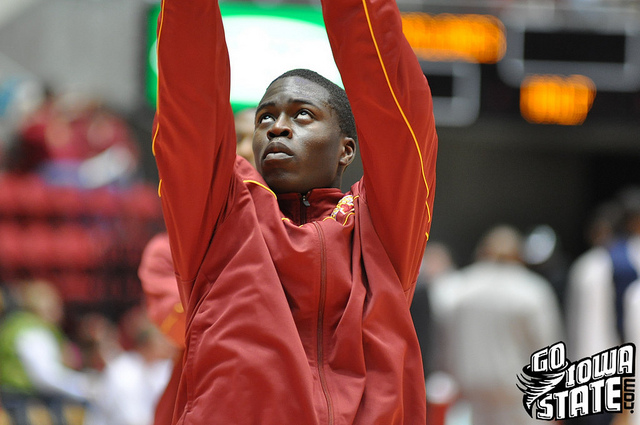 BUBU: According to the Twitter feed of Travis Hines from the Marshalltown Times-Republican, junior guard Bubu Palo will be on scholarship next season at Iowa State. Hines first reported this news on Wednesday during an Iowa State "Tailgate Tour" event in Marshalltown.

Hines cited Fred Hoiberg as his source in the report.

Should Hines’ report turn out to be true (Travis is a fantastic reporter so there’s no reason to doubt him), Iowa State now has one scholarship open for the 2012-13 season. Wisconsin transfer Jarrod Uthoff seems like the most likely candidate to fill this spot, but that’s not anywhere close to being a guaratnee. Since visiting Iowa State two weeks ago, Uthoff has scheduled visits to Marquette and Florida.

HOOPS SCHEDULE: Iowa State’s 2012-13 basketball schedule was a hot topic on our message board yesterday. This discussion was spurred by talk of the Global Sports Classic – a tournament in Las Vegas that Iowa State will participate in along with UNLV, Cincinnati, Oregon, Jacksonville State, Northern Arizona, Campbell and N.C. A&T.

According to many (I didn’t hear the interview myself), Fred Hoiberg was on local sports talk radio station 1700 "The Champ" with Marty Tirrell and mentioned that Virginia had recently backed out of next year’s game in Ames. I’ve worked the phones this morning and confirmed with my sources that this is indeed true. According to sources, Iowa State is currently looking for another BCS team to replace the Virginia game with.

— Here’s a fantastic feature story on former Cyclone/current Tampa Bay Buc Leonard Johnson who is committed to giving back to where he came from. — Tampa Bay Tribune

— The ACC’s commissioner doesn’t want to talk about Florida State and the Big 12. — ESPN.com

— A former Seminole says that the Big 12 reached out to Florida State, not the other way around. — USA Today

— Chip Brown follows up on those comments and gives the Big 12’s side of the story. — OrangeBloods.com

— TCU fans appeared to be awfully excited about joining the Big 12. — ESPN.com