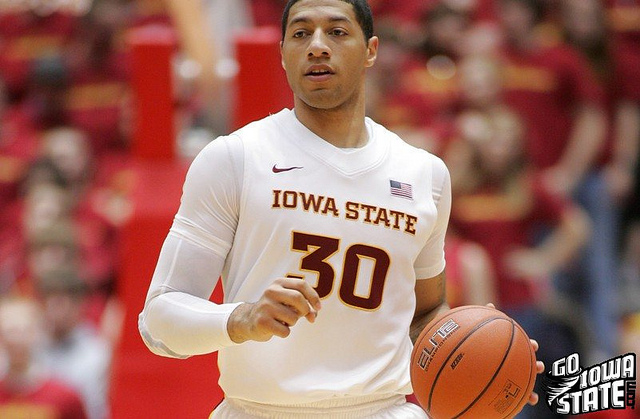 The month of March is nearing.

Despite a last second Iowa State loss at Oklahoma State on Tuesday night, I do come with good news for the Cyclone Nation in preparation for Saturday’s home date with Texas A&M.

Senior Chris Allen seems to be clicking at the perfect time. Yes, the same Chris Allen who played in two Final Fours before arriving in Ames via Michigan State.

After only scoring three points in games vs. Texas and Kansas, Allen has scored in double digits in three straight games for the Cyclones, including his 22 point, six trey ball outburst in Stillwater earlier this week.

“His big thing is to just go out and look for opportunities," said Iowa State head coach Fred Hoiberg."That second half stretch that he had was great. If he continues to play with that type of confidence for the rest of the season, we’re going to have a chance to win a lot of games.”

Allen said that his recent scoring surge is due to increased confidence, which has been the result of more preparation.

“I’ve got a little confidence. If I can get a shot that I’m comfortable with, I’m taking it pretty much," said Allen. “Just being in the gym a lot. Any free time that I have, I’m here. That’s it.”

Quietly, Allen is tied (along with Chris Babb) or first on Iowa State’s roster for 3-pointers made this season with 53. Will his hot streak continue on Saturday?

I caution Iowa State fans to not be over-confident heading into this one. Yes, Iowa State did defeat Texas A&M by 24 points in College Station on Jan. 7 and yes, the Aggies (who picked to win the league, along with Kansas by the Big 12 coaches during the preseason) have lost three straight and are a disappointing 3-8 in league play.

I get all of that.

But a guy can make the argument that even without Dash Harris (four) and Khris Middleton for the last five games, this A&M squad is playing better  right now than it was the first time these two teams met.

Texas A&M has lost three straight games, but two of those contests came down to the last possession – vs. Baylor on Feb. 1 and vs. Texas on Monday night.

“They pose a lot of challenges," said Hoiberg. "(David) Loubeau is one of the better bigs I think in our league. Elston Turner is playing with a very high level of confidence right now. If they do get those other guys back, it will be a very difficult game for us.”

Horrible might be too strong of a word to describe the Agggies on offense, but it can’t be too far off. As it stands right now, Texas A&M ranks ninth in the Big 12 in scoring offense averaging only 62.7 points per game. That’s only ahead of lowly Texas Tech. Meanwhile, the Cyclones rank fourth in the same category at 74.0 points per game.

Offense isn’t what this Texas A&M team is all about though. It’s defense that makes the Aggies tick. Texas A&M has only allowed one Big 12 opponent to score more than its season average since league play began. That’s a nice stat but if it isn’t resulting in wins, what does it really mean?

Fred Hoiberg on the first time these teams met…

“The biggest thing that we did in that game was that we did such a good job on the boards early. It allowed us to get out in transition and get some baskets on the break before their defense got set. They are a very good defensive team, especially in the half court. That was the big thing. Royce (White) did a really good job I thought of getting the ball in transition. He had nine rebounds through nine minutes of that game, all on the defensive end. That allowed him to bring it down and use his creativity, which he was unbelievable that game.”

Billy Kennedy on defending the Cyclones…

“You know, we tried to really stay connected to their shooters and really change how we like to play defensively, and we won’t do that this time. We’ll play normal rules and play inside out and try and protect the paint. So that’s one thing that we learned from it. We also have to be able to turn the ball over on offense, meaning we have to be able to run some clock and stay off the defensive end and be able to control the tempo of the game. I thought we did a good job of that against Texas for the most part. We need to a better job on the road against Iowa State.”

Aggie to watch: After sitting out five games with a knee injury, preseason All-Big 12 forward Khris Middleton is expected to return to Texas A&M’s lineup on Saturday. Chris Babb held the junior to a 3-of-12 game and only six points in the first meeting, but Middleton always has the potential to do damage.

"He poses problems with his length," said Hoiberg. "He can play different positions."

At 6-foot-7, Middleton is only averaging 12.4 points per game this season but if he truly is healthy now, keep an eye on No. 22

Over the course of the last two seasons, Texas A&M has gone 6-2 down the stretch in each of them. If that trend is going to continue, a win in Ames on Saturday is a must for the Aggies.

However, Mark Turgeon is long gone. The Aggies should have Khris Middleton and Dash Harris back tomorrow, but I’m still not 100 percent sure if that’s going to make much of a difference at all in this one.

Regarding Iowa State’s loss in Stillwater, don’t panic. The Cyclones are still as confident as a bunch as there is in the Big 12.

In its five Big 12 road games this season, Texas A&M is only averaging 52.2 points per game. The Aggies haven’t scored more than 54 points once in that stretch.

Texas A&M can play defense, but I’m just not sure how the Aggies can keep up with the Cyclones inside of Hilton Coliseum.