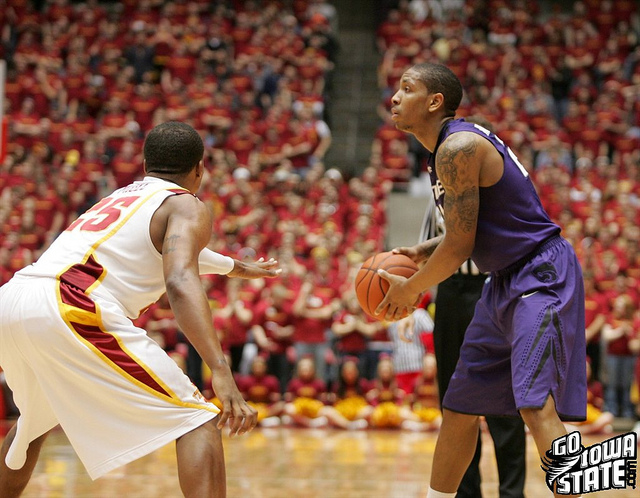 Is Iowa State on the bubble?

Whatever your answer to that question is, everybody can agree that the final three games of Iowa State’s regular season are important. All three contests, which include road trips to Kansas State and Missouri along with a home finale against Baylor, issue unique challenges.

It’s a cliche’ and the Cyclones do not care. They’re approaching the final week and a half of the season "one at a time."

“As a group, if you talk about them all together, it could make us or break us," said sophomore Royce White. "We have to take them one at a time. One half at a time. We break games down in halves, even the first five minutes and the last five minutes. There’s a lot to be gained and a lot to be lost.”

Up next is a smoldering Kansas State team. Let’s break it down.

Iowa State’s 72-70 win over Kansas State on Jan. 31 was one of the most memorable games of the season. You all remember Royce White’s buzzer-beater right?

White does, and he’d rather not have to do that again this Saturday in Manhattan.

It’s always nice when I guy can have fun with his own shortcomings, this being life at the free throw line regarding Iowa State’s future (I can only assume) All-Big 12 forward.

The future schedule is a tough draw for Iowa State. Kansas State is not only one of the hottest teams in the Big 12 right now, but the entire world of college basketball as well. Frank Martin’s club has won two in a row, both road games at Baylor and Missouri. Tuesday night’s 78-68 dismantling of the Tigers was one of the most impressive performances of the season in the entire Big 12. There’s a good chance that the Cyclones and Wildcats will see each other again in the first round of the Big 12 Tournament.

What’s the difference between Kansas State now and say, two weeks ago when the Wildcats were in some eyes, on the outside looking in in regards to the NCAA Tournament?

“They’re playing faster. They’re getting up and down the floor," said Iowa State head coach Fred Hoiberg.“They are such a tough team. They’re so physical. They’re still doing what they always do as far as that is concerned. They have a few new wrinkles in their offense."

Toughness. That’s what Kansas State, who leads the Big 12 in rebounding, is known for.

“It doesn’t matter what building they’re playing in. If you play them out in the park, they’re going to be physical and hitting you and grabbing you and all of the things that they do," said Hoiberg. "They’re great at it. They pressure as much as any team really in the nation. You have to handle it the right way. You have to go in there with the right mindset and you can’t get frustrated.”

Royce White learned something about his team in that two-point victory at Hilton Coliseum.

“We learned that we’re pretty tough too," said White. "Even though Kansas State has the mentality of being tough, when we understand who we are playing, we can match that game plan. We came out with a pretty tough victory here at home."

NOTE: Kansas State is the Big 12’s second best team when it comes to defending the 3-point shot. The Wildcats held Iowa State to only five 3-pointers on Jan. 31. Iowa State currently leads the Big 12, averaging 8.8 3-pointers per game.

Wildcat to watch: Chris Babb locked down Kansas State’s superstar Rodney McGruder in round one, holding the junior to a 5-of-16 night with only 11 points in the Cyclone victory. One can only assume that Babb will do the same in the second meeting between these two teams.

Keys to a Cyclone victory: From the mouth of Fred Hoiberg:

“Two big keys for the game on Saturday will be transition defense and trying to battle them on the boards.”

As mentioned earlier, this is a tough draw. The Wildcats are smoking hot right now. While I fully intend for Iowa State to show up, play hard and have a chance to win the game in the final minutes, I see the Cyclones falling just short from picking up win No. 21.