If the trend that we’ve seen so far during the 2011-12 Iowa State men’s basketball season keeps up, the Cyclones should come out and play well on Saturday against No. 10 Kansas.

The Cyclones appear to be a basketball team that responds positively after a loss or poor win. The evidence?

After a 74-65 loss to Drake, Iowa State bounced back to score 92 points in a rout over Western Carolina.

After two losses to Northern Iowa and Michigan, the Cyclones boasted dominating victories over Prairie View A&M and Iowa.

A 59-52 win over Central Michigan on Dec. 18 was lackadaisical. The Cyclones responded by handling Lipscomb 81-64.

And then there was the non-conference ending embarrassment over Mississippi Valley State. The Cyclones responded to start off 2-0 in the Big 12 with impressive wins over Texas and Texas A&M.

Wednesday night’s 76-69 loss to No. 9 Missouri was far from the worst game that the Cyclones have played this season. After all, head coach Fred Hoiberg did say after the game that Iowa State implemented its game plan to stop the high-scoring Tigers "perfectly."

“Everything you do, wins, losses, you try to learn from them," said Hoiberg before Thursday’s practice.

The little things (like a 13-for-25 performance from the charity stripe) kept Iowa State from starting league play off with a 3-0 record.

On last night’s CycloneFanatic.com/Wilson Toyota of Ames Call-In Show from Buffalo Wild Wings in Ames, assistant coach Matt Abdelmassih said that the Cyclones were as focused as ever during Thursday’s practice.

Will we see another bounce back performance by this team on Saturday in Lawrence? Even if that does happen, will it be good enough to snag a road upset against one of the top programs in college basketball?

After being out-rebounded 38-27 by Missouri on Wednesday, things don’t get any easier for Iowa State in a road trip to Allen Fieldhouse. Kansas currently leads the Big 12 in rebound margin at +9.0.

Interior defense was an issue for the Cyclones against a small Missouri lineup. (Gulp) Now Iowa State is dealt the unenviable task of worrying about that Thomas Robinson guy down low.

“He’s turned into one of the most complete players in the country this year," said Hoiberg. "You knew that would happen with his roll increasing with the Morris’ departing. He’s doing everything right now. He’s bringing the ball in transition off of rebounds. He’s pulling up. He made a play against Kansas State where he rebounded it, brought it up and stepped back to hit an 18-foot shot. He’s shooting threes. He’s just a horse down low. It’s going to be a big test for our bigs obviously with the way that we handled it last night, I’m sure they’re going to go right at us.”

Hoiberg is correct. Robinson and 7-footer Jeff Withey will go right at the Cyclones on Saturday. What will Iowa State do to not stop, but at the very least slow down Kansas’ big man who Dick Vitale recently named his Mid-Season Player of the Year?

Robinson, a three-time Big 12 Player of the Week, is currently averaging a double-double at 17.6 points and 12.1 rebounds per game. The All-American candidate scored 19 points in 19 minutes last Wednesday at Texas Tech, an 81-46 Jayhawk victory that was the widest margin road win in Bill Self’s tenure at the school.

Robinson has racked up 11 double-doubles this season and containing him is Iowa State’s biggest question heading into this game.

Jayhawk to watch: Besides Thomas Robinson of course…That’s junior Travis Releford, who has led Kansas in scoring (18.7 PPG) since Big 12 play began a week and a half ago. Releford recorded a career-high 28 points in a 72-61 win at Oklahoma on Jan. 7. Just a guess, but my money says that Iowa State will match ace defender Chris Babb up on Releford Saturday. Babb has taken Texas A&M’s Khris Middleton and Missouri’s Marcus Denmon out of the last two games, each player well believe his season scoring average.

RELATED: Saturday will be a "Brewster get together," writes Randy Peterson of the Des Moines Register.

Kansas’ best win: A 78-67 victory over Big Ten power Ohio State on Dec. 10 of course. The Jayhawks also defeated Georgetown on a neutral court, 67-63 at the Maui Invite.

Kansas’ worst loss: I’m still not sure how the Jayhawks let mid-major Davidson slip past them (80-74) in Kansas City on Dec. 19…

Key to a Cyclone victory: No, not free throws. If this game comes down to free throws, that means that Iowa State will have done a heap of other things very well.

Obviously, the Jayhawks like to run. That’s especially the case in Allen Fieldhouse.

The big thing that they do is they play so fast," said Hoiberg. "You’ve really got to do a good job of getting back in transition."

So we’ll throw transition defense onto the list, even though the Cyclones did nice job at this in the Missouri loss.

Crashing the boards is always going to be a key for this group of Cyclones that lacks a true point guard.

— Iowa State freshman post player Percy Gibson is expect to play on Saturday after sitting out the Missouri game with a minor knee injury.

— Kansas is currently on a 14 game home court winning streak.

— Kansas has won 12 straight over Iowa State. Saturday’s game will be the first time Iowa State has played back-to-back top 10 opponents since the year 2005.

— Since the league was formed in 1996-97, Kansas has only lost eight Big 12 games at home. Three of those were to Iowa State.

After what we saw on Wednesday, I’m just not sure how Iowa State can match up with Kansas’ front court in Allen Fieldhouse. I think that 3-point shooting will be difficult against a Kansas team that has held nine opponents to 58 points or less this season and ultimatley, the Jayhawks will just be too much. 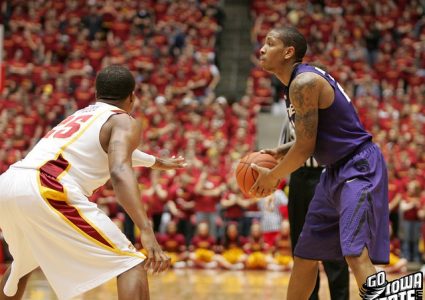