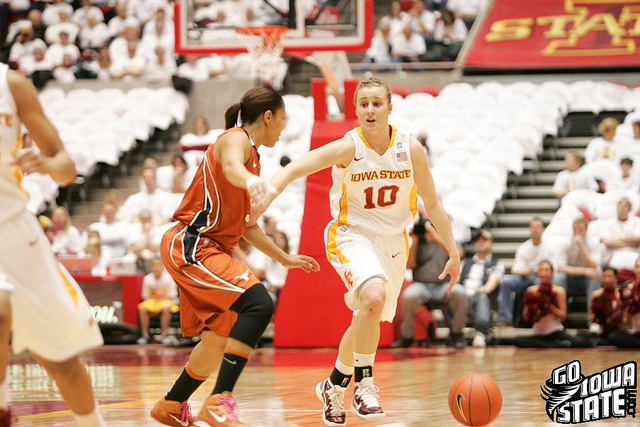 At least that’s what the Cyclones are preaching after Wednesday’s 73-52 victory against Oklahoma State.

After a brutal start to the Big 12 schedule, Iowa State (12-8, 3-6) is playing its nine-game February slate as a new season.

“We told our players when they came to practice on Monday that we are starting over,” Iowa State coach Bill Fennelly said. “We are 0-0.”

Assistant coaches Billy Fennelly and Josh Carper made a poster with February’s schedule so the Cyclones can take it with them wherever they go. Thanks to a stifling defense, Iowa State can mark its first “W.”

“You have to forget about what happened and start fresh,” Hallie Christofferson said. “That’s what we are doing in February.”

A close first 20 minutes turned into a second half rout when Iowa State put the clamps on Oklahoma State. Iowa State got big contributions from Christofferson and Anna Prins, but it was the defense that did the heavy lifting.

“Chassidy (Cole) did a great job guarding (Donohoe),” Fennelly said. “Hallie guarded her. Lauren guarded her. We tried to put a fresh body on her. She is without question one of the best freshman in our league. She’s a dynamic scorer.

“We wanted to make everything she did hard and I think we did.”

With the defense dominating, the Cyclones’ offense found its rhythm in the second half to pull away for the easy win. Lauren Mansfield swished a pair of 3-pointers to put Iowa State in front 37-28. Christofferson and Prins scored inside for a 43-30 edge.

A couple of minutes later, Christofferson – who finished with a game-high 20 points – drilled a 3-pointer and hit a short jumper for a 51-32 lead. The Cyclone started the second half on a 21-4 run.

“At halftime, we knew we weren’t playing good and so we needed to step up in the second half and we did that,” Christofferson said.

Iowa State led comfortably the rest of the way, and started the month just how it wanted – 1-0.

Anna Prins might have more potential than any player wearing Cardinal and Gold. When the junior plays up to her talent level, the Cyclones are a tough team to beat.

“That might have been, when you look at her numbers and consider the opponent, (Prins’) best game of the year,” Fennelly said. “She played with a lot of energy and wanted the ball.”

With the Cyclones’ offense struggling in the first half, Prins scored eight key points to send Iowa State into the break leading 30-28. After halftime, she helped fuel a 21-4 spurt with a pair of buckets.

The effort was especially important because Chelsea Poppens had a rare off night, going 4-of-13 from the floor.

“Poppens was struggling in the first half, it’s going to happen occasionally,” Prins said. “Someone else has to step up.”

Iowa State is playing February as its own season, so what do the Cyclones need to do to make the NCAA Tournament? Would a 6-3 month be enough?

That’s a tricky question. Iowa State improved to 12-8 overall and 3-6 in the Big 12 with Wednesday’s win. The Cyclones’ RPI sits at 60, but that was before beating Oklahoma State who was 43rd in RPI.

The schedule gets considerably easier in the second half of Big 12 play. If Iowa State can six wins this month and finish 8-10 in the conference, will that give the Cyclones a spot in the field of 64? Oklahoma State coach Jim Littell thinks so.

“Iowa State is going to be in the NCAA Tournament again. They are going to have 9, 10 or 11 (conference) wins again.”

“She is my favorite player in the league. She plays the way  it ought to be played.”

–       Iowa State only turned the ball over eight times on Wednesday and had 16 assists.

–       Nikki Moody played solid basketball with 13 points. So did Lauren Mansfield, who finished with nine.

The dog days of January are over. The brutal Big 12 slate the Cyclones faced to start conference play has finally turned in their favor. Iowa State will play five more home games against just three road games to finish the regular season.

During that span, you can bet the Cyclones will have revenge on their minds. First up is Texas on Saturday afternoon. Iowa State lost to the Longhorns (13-7, 3-5) 62-60 on Jan. 18 when Yvonne Anderson’s floater went in with 0.7 seconds left.

The Cyclones are hoping for a little payback in Hilton. To do that, Iowa State needs to stop Chassidy Fussell. The sophomore guard averages 16.7 points per game for Texas. Anderson (11.4) and Ashleigh Fontenette (11.1) also average in double figures for the Longhorns.