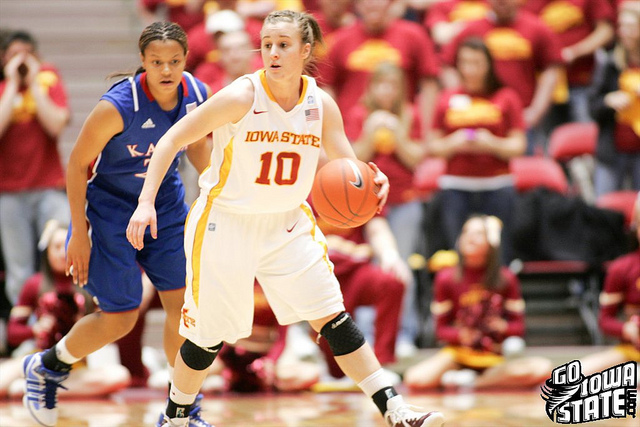 AMES – Does this mean Lauren Mansfield and Chassidy Cole get a second senior night?

Wednesday night was supposed to be it, but after Iowa State dismantled Kansas State, the Cyclones are all but assured of at least one more home date at Hilton Coliseum.

The next one will be in the NCAA Tournament.

Iowa State (18-10, 9-8) will likely play another game in Ames because of its shut down defense. The Cyclones stifled the Wildcats to cruise to a 57-33 victory.

The 33 points is the least Iowa State’s ever allowed in a Big 12 game.

“Not only was it a great senior night for (Mansfield and Cole), but it happened at a time when it was important to our team,” Iowa State coach Bill Fennelly said. “I thought both of them played great.”

Iowa State led just 21-17 after a sluggish first half, but the Cyclones exploded past Kansas State after the break.

Mansfield helped spark the rout. First, the senior drove the baseline and found Hallie Christofferson for a wide-open 3-pointer. On the next possession, Mansfield swished a trey of her own to push Iowa State to a 27-19 advantage.

The onslaught continued with Chelsea Poppens, Anna Prins and Nikki Moody scoring inside for a 35-21 edge. Five different Iowa State players scored during the 14-4 run out of the halftime break.

“When we started hitting a few shots, and getting a few baskets, and playing good D, we started to get a little momentum then,” Mansfield said.

Another Cyclones run put the Wildcats away. Prins, Moody, Mansfield and Christofferson all swished 3-pointers to give Iowa State a 51-29 lead.

“As a team, we wanted to play well for our seniors,” Moody said. “We wanted to end on a win for them.”

Although Cole only scored four points, her play on defense spearheaded the win. The senior played 38 minutes and held the Wildcats’ Brittany Chambers to four points on 1-of-7 shooting.

Jalana Childs, Kansas State’s other star player, notched 10 points but it took her 12 shots to do it. As a team, the Wildcats shot 28.9 percent from the field.

“Their defense was good,” Kansas State coach Deb Patterson said. “It did the trick. It exploited our weaknesses. It put us in position to stand around a lot and become passive. When we do that, we are terrible.”

When Iowa State sees its name called on Selection Monday, it will because of the Cyclones’ play in February. Iowa State went 7-2 during the month and improved to 9-8 in the Big 12.

“It’s a nice way to end February,” Fennelly said. “We talked about one month, one focus. To go from 0-5 to 9-8 and go through February 7-2 is a great credit to our players, my assistants and certainly the fans.”

So does Fennelly think the Cyclones are in? He’s not about to politic, but he’d like to think so with their record in the Big 12. Still he’s having his assistants crunch the stats.

Forgive Lauren Mansfield if she was just a tad nervous before Wednesday night’s game. It was the first time her parents have seen her play at Iowa State.

After a few shaky minutes to start the game, Mansfield was her normal steady self. The Australia native scored 13 points and dished out four assists in the victory.

It won’t be the last time Mansfield’s parents see her play. Her folks are staying in the United States until the end of March.

“They were asking me what to do, and I wasn’t really quite sure what there is to do in Ames,” Mansfield joked.

Is this one of Bill Fennelly’s best coaching jobs? Considering the circumstances, it might be.

The 17-year head coach started the season battling cancer and a 0-5 record in the Big 12. Now, Fennelly’s molded his squad in a NCAA Tournament team.

It will be Iowa State’s sixth-straight trip to the NCAA’s.

“You feel like a proud parent to see them do that in front of crowd like that and feel like they’re ready to move on with their life.”

“We asked Chassidy to chase her, chase her. She did for 38 minutes.”

–       Three Cyclones have notched a career-high 11 assists during a game this season. Nikki Moody pulled off the feat against Oklahoma. Lauren Mansfield did it against Texas and Chassidy Cole against Kansas.

–       Chelsea Poppens probably played her worst game of the season on Wednesday, scoring only four points in 17 minutes. Give her credit just for playing though. Poppens didn’t practice leading up to the game because of hard shot she took against Oklahoma State.

–       Moody finished with 15 points and three assists for the Cyclones.

The Cyclones close out their regular season with a road trip to No. 1 Baylor. The Bears are the favorites to win the national title behind their superstar, Brittney Griner. The 6-foot-8 center is averaging 22.7 points, 9.7 rebounds and 5.1 blocks per game to lead Baylor to a 30-0 record so far this season.

Griner isn’t the only one who can hurt opponents. Odyssey Sims is scoring 14.7 points per game and has 143 assists this season. Destiny Williams (9.8), Kimetria Hayden (9.3) and Brooklyn Pope (8.4) all average more than eight points per contest.

Earlier this season, Iowa State played Baylor tough before losing 57-45 at Hilton Coliseum. Anna Prins paced the Cyclones with 17 points in the loss. Griner scored 26 for the Bears.