It’s time to tackle another mailbag column here at CycloneFanatic.com. With the 2012 football schedule being released earlier this week and Iowa State’s men’s basketball team’s potential trip to the NCAA Tournament, we’ve got a lot to get to.

Let’s begin today with some football questions, starting with one from Gullie.

Gullie writes: I am really looking forward to attending the West Virginia game at Jack Trice in late November. Is this going to be a regular date for playing them? Is this an advantage for the Clones if the weather is poor?

CW: When the Big 12 released its future schedules after Nebraska and Colorado departed the league a year ago, these slates went out something like 10-plus years.

As I wrote on Tuesday morning, that tells me two things.

1) The league isn’t sure what things will look like in 2013. The Louisville rumors are deafening. If they turn out to be true, one can only assume that the league will jump to 12 schools. Who else will be on the move?

2) What I wrote on Tuesday morning:

I can only imagine that the league had to get something out there to satisfy its television partners. This theory also answers another important question that has been pondered quite a bit as of late:

Why not just plug TCU into Texas A&M’s slot and West Virginia to that of Missouri’s?

The Big 12 likely wanted to balance out its schedule so that it had attractive matchups for television throughout the entire season. New programs mean different things. West Virginia doesn’t rival Kansas, as the Tigers were the Jayhawks’ No. 1 foe.

The same goes with Texas and Texas A&M.

Just a theory. I could be dead wrong.

To directly answer your question, I don’t really know but I wouldn’t bank on that date with West Virginia staying the same throughout the course of time. Sure, in 2012 that will be "rivalry week" in the Big 12. But Kansas lost Missouri. It’s natural rival now is Kansas State.

Who are the two most isolated teams in the league? That’s Iowa State and West Virginia. And there you have it…

ItsCYence writes: What ISU football game are you most excited for in the Big 12 next season?

CW: Hmmm. As Gullie wrote up above, that West Virginia is awfully intriguing for multiple reasons. The two schools have never met on the gridiron. It’s the final game of the season. I can only imagine that a lot will be on the line. I’ll go with that one but Oklahoma excites me as well. When I look ahead to 2012, something tells me that this could be the latest installment of the "Paul Rhoads Upset Special."

HFCS writes: Why was the interior defense so swiss cheese like against Baylor? Players didn’t execute the game plan? ISU just doesn’t have the inside personnel to match up? Baylor’s circus freak talent level? Coaching/defensive schemes we were in?

CW: Great question. It’s so great that I’m moving it onto tomorrow’s Williams/Blum Friday Debate. We will discuss it in that column.

State43 writes: Any news on Clyburn’s rehab? At the beginning of the season, they said he got hurt but I can’t remember how serious it was. And do you plan to do an interview with him so we can all learn more about the guy? Like why he chose ISU, why he left Utah, what he thinks of this year’s team, etc.

CW: Will Clyburn broke his foot right before the season started and to my knowledge is doing just fine. In fact, I’ve seen him putting in an extra workout multiple times before the team meets with the media on Thursday afternoons.

I’ve interviewed Will in the past but I’m sure I can do it again in the future. He left Utah because of a coaching change. Will played JUCO ball in Marshalltown so he’s always had a relationship with Iowa State, specifically associate head coach T.J. Otzelberger.

Isufan writes: Who is the best interview you’ve ever done that isn’t directly with ISU sports (ISU players, coaches, and staff)? Why?

CW: A couple of very random figures immediately come to my mind. Without question, the best was former St. Louis Cardinals pitcher Todd Wellemeyer. He’s a bit of an odd duck but gives some very spontaneous and honest answers. Those guys/gals always make the best interviews.

Another one is Luke Hochevar of the Kansas City Royals. I interviewed him at spring training one year before he was in the big leagues. The interview itself was actually pretty ordinary. But after we got done, "Hoch" started telling me a handful of Chuck Norris jokes. Hocheavar was obsessed with this Chuck Norris jokes book that he had recently obtained.

On a local scale, you’d be amazed at how many interesting people I interviewed during my three years at KMA Radio in Shenandoah. No big leaguers, but some outstanding people who have done some amazing things over the years.

Acylum writes: If you won the lottery and were giving $10 mil to ISU athletics, what would you like them to spend it on?

CW: Great question, but due to the nature of my job, I cannot donate to the athletics department.

I would give a portion of the money to Iowa State’s Greenlee School of Journalism and some to Vet Med as well. I’m passionate about the field of journalism (I also graduated from that school) and with my wife being a veterinarian, it only make sense to share the love.

CRcyclone6 writes: Your a WWE fan right? Was Kane attacking Zack Ryder on RAW Monday a little over the top? I mean he was in a wheel chair and pushed him right off the stage. It’s real right?

As for that being over the top, it isn’t any more over the top than the good ole’ days when the Undertaker would bury men alive. How many times has Kane sent (in my best JR voice) opponents "STRAIGHT TO HELL" with a choke slam through the ring?

But yes, I love the WWE and I must say that this whole Kane/Cena/Ryder angle is as lame as I’ve seen in quite a while (although the twist of Cena kissing Ryder’s gal was a nice twist on Monday). I’m pretty disappointed in the WWE as of late actually. I’ve never seen less of a build up to Wrestlemania. The Rock vs. John Cena hasn’t been promoted on WWE programming hardly at all. Perhaps that will come in the future? It’s hard to build a match up as "the biggest in WWE history" if one of the competitors is never around.

I really thought that the WWE had some traction back in August with the whole CM Punk quitting as the champ angle. Punk was on fire but they’ve turned him into a face and the entire industry is flat again.

What ever happened to stables? That’s what the WWE is missing in my opinion. A good old fashioned nWo or DX type of stable to attempt to "take over" or something like that.

Brentwood writes: Let’s assume we make the tournament. I want predictions for how far we go in the Big 12 an NCAA tourneys. Go!

CW: Man, that is soooo hard to do without seeing what the brackets look like. You know this!

I’ve mentioned this quite a few times on the site but I’ll write it again. These Cyclones seem to really flourish when the lights are shining the brightest. All you have to do is compare the way this team looked in the non-conference and compare it to what we’ve seen in Big 12 play.

I think that they’ll play their best basketball of the season down in Kansas City. Just a hunch. If I had to guess, I’d give Iowa State at the very least one win in Kansas City and a first round victory in the NCAA’s but without seeing the brackets, that "prediction" means next to nothing.

Stevefrench writes: Will you be my valentine?

Seems like a good place to end this thing…Tune into the Wilson Toyota Call-In Show from Buffalo Wild Wings in Ames tonight from 7-8 on 1460 KXNO! 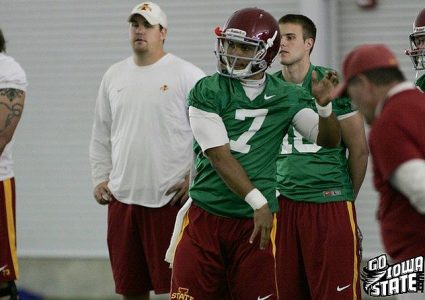