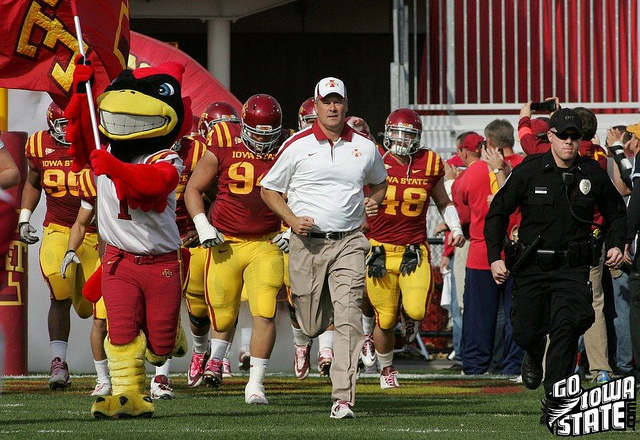 From what I’ve read though, here’s what I like.

It’s no secret that Bob Elliott was a great catch when he came to town two years ago. Elliott’s three decade worth of college football experience were priceless. He was a fierce west coast recruiter who was successful in doing what I thought would be a difficult thing to do – That’s make the Cyclone Nation forget all about the promising future of Chris Ash, who had recently departed for a similar job at Wisconsin.

Let’s fast forward to today. Take a quick look at this paragraph from Iowa State’s press release regarding the hiring of Tony Douglas.

Douglas’ Iowa State tenure begins in his 25th season as a college coach. His initial Cyclone season marks his 23rd year in the defensive backfield. He has coached in a total of 10 bowl games, including six straight postseason appearances. Douglas recently completed his third season as Carolina’s defensive backs coach. He has tutored 16 players who have players in the National Football League.

You see what Paul Rhoads did here don’t you?

Rhoads lost Elliott, a well-respected veteran, and replaced him with another.

Elliott’s recruiting strength was on the west coast. Douglas is a Florida guy. New wide receivers coach Todd Sturdy will pick up where Elliott left off in the state of California. Douglas will beef up Iowa State’s already strong presence in the recruiting rich state of Florida.

Another thing that I like about Iowa State’s staff for next year is the familiarity factor. Instead of looking elsewhere to replace Tom Herman at offensive coordinator, Rhoads went with Courtney Messingham. That’s an easy transition for everybody involved.

Sturdy is an Iowa native.

Douglas has a long history with defensive coordinator Wally Burnham.

How will these moves work out? Who knows. But on the surface, I really, really like Iowa State’s coaching staff heading into the 2012 season.