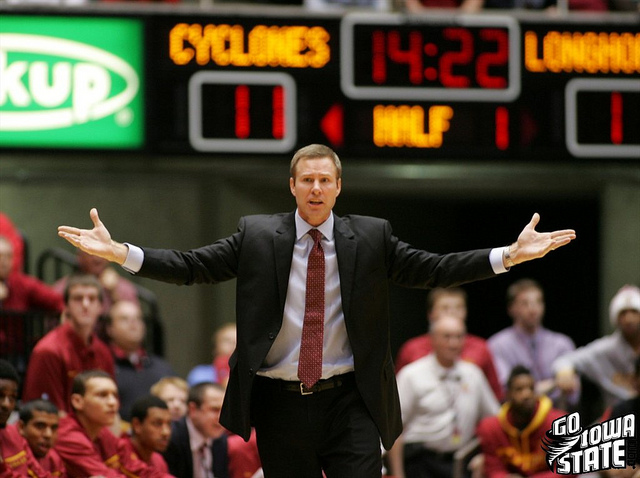 A seemingly comfortable Iowa State lead disappeared in a flash as shots stopped falling, calls went the other way, and Kansas went on another familiar run to beat the Cyclones 82-73 on Saturday.

The Jayhawks used a 17-2 burst to turn a double-digit deficit into a 70-61 advantage. Any chance the Cyclones had of knocking off No. 10 Kansas vanished.

Iowa State led 59-53 when the Jayhawks started their decisive run. Tyshawn Taylor drilled a 3-pointer from the top of the key to knot the score at 59. The senior hit another trey seconds later for a 66-61 edge.

Taylor – who finished with 27 points – capped the flurry with a fast-break layup for a 70-61 lead.

Melvin Ejim nearly pulled Iowa State back with six quick points, but Iowa State ran out of gas. The loss drops the Cyclones record to 12-5 and 2-2 in the Big 12.

It looked like Iowa State would pull off the upset early on. The Cyclones jumped on top 16-7 and led the rest of the way until Kansas’ big run.

The good news is Iowa State showed it can play with one of the top teams in the country on the road. Unfortunately for the Cyclones, they couldn’t hang on.

Iowa State will need to bounce back in a hurry as Oklahoma State comes to Hilton on Wednesday.

Royce White wrapped up his fifth double-double of the season on Saturday in the first half. That’s impressive, especially against a talented Jayhawks bunch.

The sophomore started the game by hitting his first career 3-pointer. From there, White dominated the paint and snatched every rebound in sight, finishing with 18 points and 17 boards

White’s numbers could have been even more impressive if he didn’t have to sit out the last handful of minutes of the first half with foul trouble.

Hot start: Not many teams go into Allen Fieldhouse and jump on Kansas like the way Iowa State did on Saturday. The Cyclones came out gunning from long range and hit their first four 3-pointers to take a 16-7 lead.

Royce White started the scoring barrage when he drilled the first 3-pointer of his career. On the next possession, Melvin Ejim cashed in from deep for a 6-0 advantage.

Chris Allen and Anthony Booker both swished 3’s to push Iowa State ahead 16-7 with 15:37 left in the half.

Rebounding: The Cyclones outrebounded Kansas 46-38 on Saturday. That’s a significant number considering the Jayhawks entered the game with a plus nine advantage on the boards – tops in the Big 12.

The problem, though, is that Christopherson can sometimes get lost on offense. Clearly the best outside threat on the roster, Christopherson should be getting more than three looks from 3-point range.

Foul trouble: Iowa State had a chance to pull away in the first half. Unfortunately for the Cyclones, the refs made sure that didn’t happen. Royce White, Melvin Ejim and Anthony Booker all missed time in the opening stanza with foul trouble.

The Cyclones were able to hold off Kansas going into the break, leading 43-40, but with those three on the floor who knows if Iowa State would have been able to land a knockout blow.

Fast-break points: One big problem for Iowa State on Saturday was turnovers. The Cyclones gave up the ball 16 times and the Jayhawks turned that into 14 fast break points.

During Kansas’ second half spurt, the Jayhawks got up and down the floor with ease to convert some easy hoops.

For the game, Iowa State only recorded 10 assists. Compare that to Kansas who notched 20 assists against just seven turnovers.

Free Throw: Iowa State improved its percentage from the line on Saturday, hitting 16-of-25 attempts for 64 percent. But when it came down to crunch time, the Cyclones couldn’t connect.

Royce White missed a pair of free throws down 76-70 when Iowa State was trying to claw back. White went 3-of-8 from the line in the game.