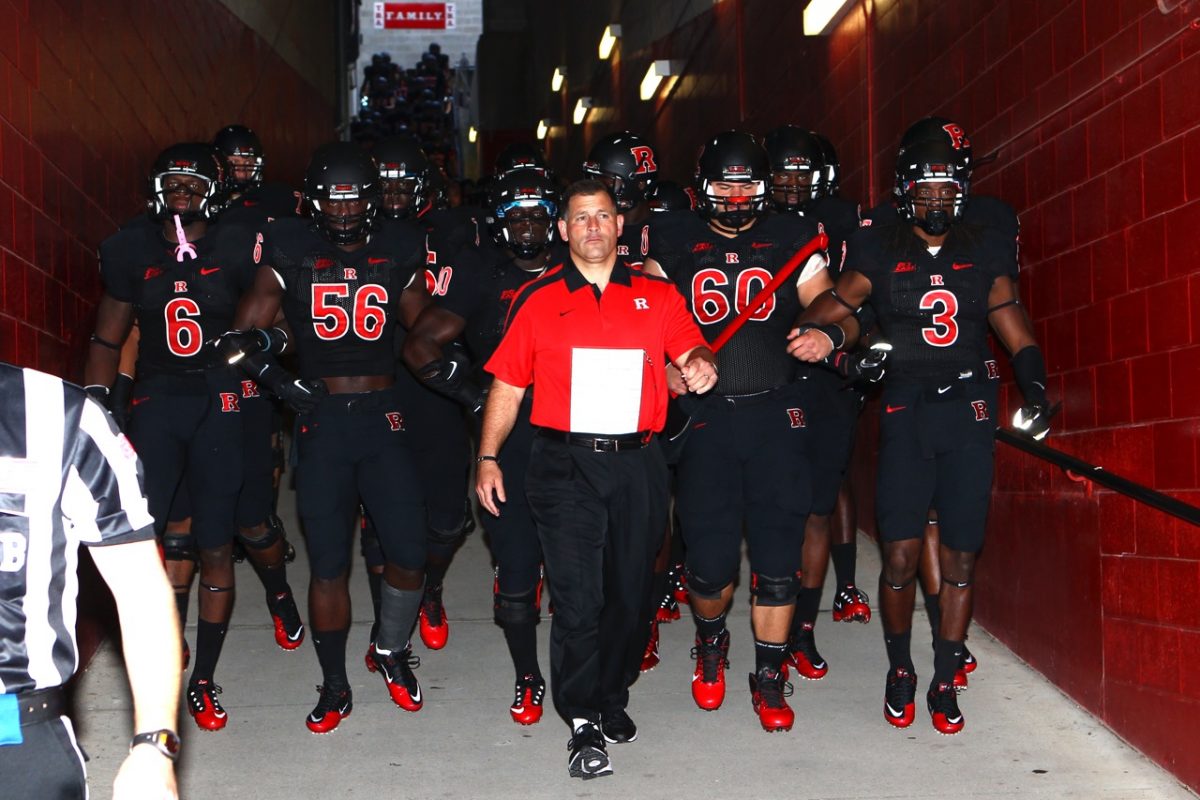 To preview Friday’s New Era Pinstripe Bowl between Iowa State and Rutgers, I recently caught up with NJ.com’s Rutgers fan blogger who goes by RUFANJERRY. You can follow him on Twitter @RUFANJERRY or on Facebook as well by CLICKING HERE.

To learn more about Iowa State’s bowl game opponent, I highly recommend reading this Q&A with a Rutgers expert.

CF: How did most Rutgers fans react when they learned of a matchup with Iowa State in the 2011 Pinstripe Bowl?

RUFANJERRY: Unfortunately for most Rutgers fans the week leading up to the Pinstripe Bowl announcement was spent reflecting on a devastating loss at UCONN the week prior. With a chance to clinch at least a share of the title, Rutgers went out and turned the ball over on its first two offensive possessions leading to a 14-0 deficit and an eventual 40-22 loss to the 5-7 Huskies. So in a matter of two days Rutgers fans went from dreaming of an improbable Orange Bowl birth to a likely Belk Bowl birth and then to a Pinstripe Bowl nod.

Once the Pinstripe Bowl reality sent in – and to many fans it was always a matter of either BCS or Pinstripe Bowl all season because of Rutgers proximity to the bowl – then many were hoping for Texas A&M or Missouri. This is no disrespect to Iowa State, just an issue of familiarity. Most area college football fans are aware of the Aggies and the Tigers. The Cyclones almost put Rutgers in a no-win situation in regards to perception. Of course Iowa State’s thrilling upset against Oklahoma State was seen by many, so this helps in that regard. Once fans started learning more about this Cyclone team and their defensive minded, hard-nosed style of play, many became excited to see this matchup. There also is a great similarity in the two programs. Both have been playing college football for a long time without much success, but have recently turned that around and are looking to gain respect for that upward trend. This game is an opportunity to this.

CF: From what I’ve been able to gather about the two Rutgers quarterbacks, they are pretty similar when it comes to how the opposition has to plan to defend them. Would you agree with that analysis? Also, which quarterback do you think will start the Pinstripe Bowl vs. Iowa State?

RUFANJERRY: You are correct in that Rutgers will not run two different offenses for each player. This is not a situation where you have a more athletic quarterback and a spread-type offense versus a drop-back quarterback and a traditional offense. Both Chas Dodd and Gary Nova will run offensive coordinator Frank Cignetti’s pro-style game plan. However, they do have different tendencies. The sophomore Dodd (9 TDs, 7 Ints, 1398 yards) will complete a higher percentage of passes (56.6%) and attack the outside. Dodd will also key in on standout WR Mohamed Sanu and go to him in key situations regardless of he is covered or not. They have that level of trust in each other. Dodd and Sanu hooked up for 16 completions in a game earlier this year. Presumably, because of his size – he is generously listed as six foot – he is less likely to throw across the middle than Nova. Nova (11 TDs, 9 Ints, 1533 yards) is the lower percentage play (51.4%) but also the home run hitter. He is much more likely to step up into the pocket and hit one of Rutgers’ deep threats, especially emerging red-shirt freshman Brandon Coleman who averaged 29.1 yards on 16 receptions this season.

Who Coach Greg Schiano chooses to start this week will remain a mystery until game time. I would probably go with Dodd because of the opponent. Iowa State is not a traditional juggernaut Big 12 offense which will force Rutgers to light up the scoreboard to keep up with them. Dodd would be the safe play. Nova may be the future but at this time he is just as likely to step up into the pocket and complete a 40 yard pass play as he is to make a freshman error and intentionally ground a ball or turn it over. It would be great to see both play, as bowl game experience is invaluable, but Schiano has not shown the propensity to play it that way this year. He picks one and goes with them. So the money is on Dodd this game.

CF: From a Rutgers perspective, what concerns you the most about Iowa State’s team?

RUFANJERRY: It’s defense. What makes this game so compelling is that Rutgers is being matched up with one of the few programs in the Big 12 that value a strong defense. While this will be good for the Scarlet Knights in that the flow of the game – a defensive, sometimes not pretty, hard hitting game – will be what they are used to, Rutgers could also find itself having difficulties scoring. Last season, the Scarlet Knights gave up the most sacks in NCAA history. While the offensive line has done much better this year, they are no means solid and remain a weakness on the team. Rutgers struggles to run the ball – ranking 115th in the nation – which puts pressure on its passing game. With standout linebackers Jake Knott and A.J. Klein, Iowa State could very well shut down the run on the Scarlet Knights. This would allow the Cyclones to bring pressure and take away the benefit of the Scarlet Knights talented receivers.

CF: Give me a scouting report of the Rutgers defense. What kind of schemes do the Scarlet Knights run? Does Rutgers blitz a lot? Please elaborate.

RUFANJERRY: Rutgers led the Big East in total defense (314.4 ypg), pass defense (168.3 ypg), and scoring defense (18.8 ppg). Rutgers runs a 4-3 scheme. They are a quick, yet undersized defense. They are led on the defensive line by standout junior DT Scott Vallone. This year Vallone is playing the 3-technique or essentially being the nose guard of the two tackle positions. While he has not tallied as many tackles as in the past he occupies blockers and frees up an athletic linebacker corp. That corp is led junior linebacker Khaseem Greene, a former safety who was named the Big East co-defensive player of the year after his first season at the position. Greene had a conference-leading 127 tackles, including 17 in a win over USF on November 12th. Rutgers blitzes, but not a ton relative to other teams. They do however, stunt and switch often, which has made them susceptible to the big play, particularly in the running game if they get caught vacating a spot. You want to be able to run the ball to wear down this defense.

In the secondary, Rutgers is led by All-Big East First Team junior strong safety Duron Harmon, who finished second in the conference with five interceptions during his first year as a starter. Sophomore cornerback Logan Ryan, who tied for the league lead with 13 pass breakups, looks to be the next in a line of NFL ready covermen produced by Rutgers. The Scarlet Knights ranked sixth in the nation in pass efficiency defense. Of course, Rutgers was not facing the high powered offenses of the Big 12 and do have some weaknesses on pass defense as well, particularly the failure to generate pressure from the front four at times.

CF: Iowa State played one of the toughest schedules in America and competes in the Big 12 Conference. The Cyclones were 6-6 in the regular season. Meanwhile, Rutgers finished the year 8-4 in the Big East. I think that we can both agree that the Big 12 is a stronger league, but does that mean anything to you come bowl season? What is your analysis in terms of matching up these two conferences.

RUFANJERRY: The Big 12 is a better conference, no one will dispute that. However, Big East football is not poor by any means. The Big East has been hurt by the lack of one or two stud teams that carry the name of the conference and the losses of some very good coaches. There are no traditional powers like Texas, Oklahoma or Ohio State whom are conference flag bearers on a national stage. Those kinds of schools also generally get overrated in off years, making victories over them more impressive than they are. This flows downhill as teams who beat those teams, lose to others and you have a constant cycle of teams shuffling in and out of the Top 25. Additionally, coaching turnover in the Big East that has seen the likes of Brian Kelly, Rich Rodriguez and Bobby Petrino leave the conference, caused holes in recruiting classes that weaken the depth of the programs affected.

However, despite having no powerhouse programs, the Big East has no bad programs either. No team in the conference was worse than 5-7 overall. As a result you have a few good and average teams beating up on each other. This is problematic for the conference as for the last two seasons the winner has been 5-2 in conference.

So yes, from a perspective stand point the Big East will not win any popularity contests, but by no means does it mean, because Iowa State was 6-6 in the Big 12 they’d necessarily do much better in the Big East. That is not to say the Cyclones do not have an advantage by playing such a difficult schedule. No situation is going to be too big for them. But when the two teams tee it off Friday it won’t be their opponents playing for them, but each other. I think yes, you can throw most of it out the window.

CF: What’s your prediction for the big game?

RUFANJERRY: Rutgers 23-16. Iowa State clearly had the most difficult schedule. However, they did lose five of the six games they played against ranked teams. In the end those are still losses, so aside from one magical November night, the jury is still out as to whether this is a good team or not. Rutgers on the other hand, has always elevated its play come bowl season, and with a young and talented team the extra month of practice should benefit them the most.