DES MOINES – Pick an adjective and it likely fits.

They can all be used to describe Iowa State’s hardnosed, 71-64, victory against Drake. When all looked lost, the Cyclones (2-0) found a way to storm back and win.

“I’ve been asking this team to play the Iowa State way, and I thought we did that the last 10 minutes,” Iowa State coach Bill Fennelly said.

“This is one of those games that hopefully down the road, at the end of the season, you look back on and it changes our season a little bit.”

Down 50-37 and later 59-50, the Cyclones used a pair of scoring runs to turn a potential nightmare into a solid road victory.

“The feeling that you get when everybody is making their shot, everybody is hustling, good things are happening is so great,” junior Jessica Schroll said.

Brynn Williamson started and ended Iowa State’s first spurt with 3-pointers. The freshman began to turn the momentum when she drilled the Cyclones’ first 3-pointer to pull Iowa State within 50-42.

The shot pushed the Cyclones’ record of consecutive games with a trey to 519, but more importantly it provided a spark. Instead of hoping for the ball to go in, Iowa State started attacking on offense.

“I know that in those kind of times, Coach Fennelly and Coach (Jodi) Steyer told me that’s my time to step up and hit a shot,” Williamson said.

Drake responded after Williamson’s second 3-pointer with an 8-2 run, but the Bulldogs had no chance of holding off Iowa State.

Trailing 59-50, the Cyclones ripped off a 17-0 run. Hallie Christofferson cut the Drake lead to 59-56 with a 4-point possession. The junior made a free throw, then took advantage of an offensive rebound to drill a 3-pointer.

Following Christofferson’s clutch play, it was freshman Nikki Moody’s turn to star. Frist she converted a traditional 3-point play when she beat her defender for a layup and drew a foul. A few possessions later, Moody blocked a Drake shot on one end and made a brilliant lob pass to Chelsea Poppens on the other for another 3-point play.

“Nikki is a dynamic talent,” Fennelly said. “She is good with the ball. She is a freshman point guard playing in her first road game.

“The kid is a gamer, she loves to play.”

Schroll helped put Drake away when she swished a 3-pointer from the left wing to push Iowa State ahead 67-59.

“I think my teammates are teasing me a little bit because I took a deep breath (before shooting),” Schroll said.

It was a remarkable turnaround after the Cyclones scored only 34 points in the first 30 minutes of the game.

Iowa State transformed into a different team that last 10 minutes when it went bonkers for 37 points and scored the crucial early season win.

One shot can always change a game, but how about a season? Brynn Williamson’s 3-pointer in the second half might do just that.

Down 50-37 and looking lost on offense, the Cyclones came back thanks in large part to the spark Williamson provided. The freshman hit a pair of clutch 3’s to help send Iowa State back to Ames with a win.

“Brynn can shoot it,” Fennelly said. “We want her to shoot the ball. She obviously has to defend better, but she is someone that can shoot it and has the confidence to shoot. She is not shy about it. If she touches it, she is usually going to shoot it. She’s not real shy. Certainly it was two big ones at really big times in the game.”

Williamson finished with six points, but her heroics can’t be measured on the stat sheet alone. Without her 3-pointers, who knows if the Cyclones would have woken up in time to beat the Bulldogs.

In one possession, Nikki Moody flashed how special she can be in a Cardinal and Gold uniform. Staring at a 59-56 deficit, the freshman saw a crease and burst past the Drake defense. Moody muscled in a layup and drew a foul to tie up the score.

“She gives us something we haven’t had in awhile,” Fennelly said. “We haven’t had someone break someone down in the bounce. That play in transition where she took it coast to coast, everyone was looking around kind of who was that? That doesn’t happen at Iowa State very often. That was kind of fun.”

Yes, Moody made plenty of mistakes Tuesday night, but with the game on the line, she came through. She finished with 16 points, three assists, two blocks and two steals.

As Fennelly said afterward, “She’s a gamer.” Most people would probably agree and Moody is just beginning to scratch the surface of her true talent.

–       Chelsea Poppens played a big role in the win, as well. She scored 18 points and looked more much comfortable on offense. The key Poppens said was slowing down her game and not forcing shots.

–       Drake’s Stephanie Running notched 18 points to pace the Bulldogs. Iowa State especially struggled to defend Running in the first half when she hit 6-of-7 shots. Rachael Hackbarth and Kyndal Clark each scored 15 points for Drake.

Iowa State is back at Hilton Coliseum on Sunday for a matchup with Northern Arizona. The Lumberjacks (1-1) opened their season with an 84-60 loss at Colorado. In its next game, Northern Arizona bounced back with a 67-59 victory against UC Riverside.

The Lumberjacks are led by center Amy Patton’s 19.5 points per game. 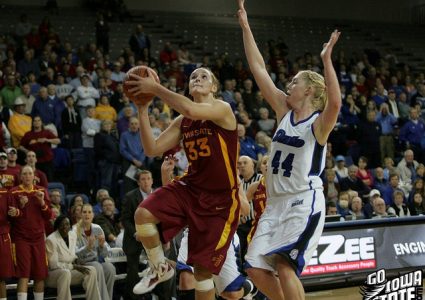