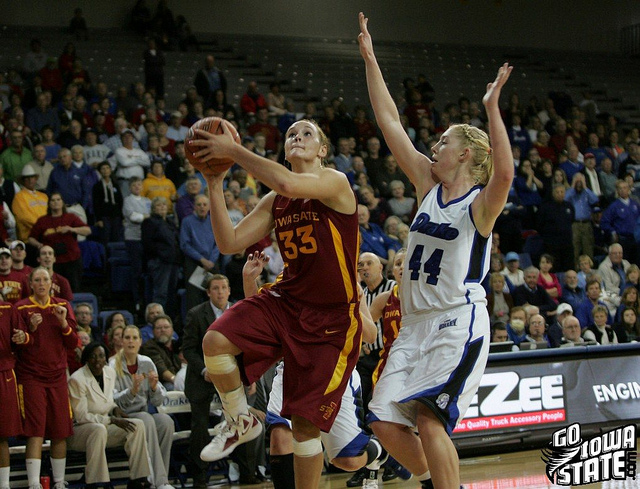 It also helps when your coach possesses better motivational skills than Tony Robbins.

The ingredients worked perfectly for Iowa State (5-2) on Wednesday. The Cyclones downed rival Iowa, 62-54, in front of 12,662 fans at Hilton Coliseum.

Fennelly knows better than anyone. The victory improved his record to 11-5 against the Hawkeyes (5-4), and he’s undefeated at home.

In fact, Iowa has not won a game at Hilton Coliseum since 1989.

“This is a lot bigger rival than there is in high school,” freshman Brynn Williamson said. “I got a glimpse of it at the football game, but it’s nothing until you get into Hilton.”

Still, after a sloppy start, it looked like Iowa could grind out a win. Needing a spark, Fennelly ignited the Cyclones with his passion.

With the Hawkeyes leading 21-18 late in the first half, Chelsea Poppens was whistled for an inadvertent elbow to the face of Iowa’s Morgan Johnson. The only problem was it took all three refs a handful of minutes to figure out the call and multiple looks at the monitor.

Fennelly wasn’t happy when the refs finally gave him an explanation and he received a technical foul. The Hawkeyes made 3-of-4 free throws to take a six-point lead.

“As soon as he got (the technical), our motto was, ‘He’s fighting for us, we’re fighting for him,”’ Williamson said.

The Cyclones ended the half on an 8-0 run thanks to a 3-pointer by Nikki Moody and a 3-point play by Hallie Christofferson to cut the Hawkeyes’ advantage to 27-26.

“Seeing Coach Fennelly’s emotion and him like fighting for us was an amazing feeling,” guard Lauren Mansfield said.

The confidence carried into the second half. Williamson gave Iowa State the lead for good at 33-30 when she drilled a 3-pointer from the left corner. The Kansas City native made a tough jumper inside on the next possession for a five-point edge.

After another long trey from Williamson, it was Mansfield’s turn. The senior scored eight of the Cyclones’ 12 points to push Iowa State ahead 52-43.

After struggling early this season, Mansfield came up with 15 huge points on Wednesday. Fennelly called Mansfield’s number when the Cyclones needed a big shot.

“That’s certainly something that’s big for me, big for my confidence,” Mansfield said.

The Hawkeyes had no chance of coming back against the Cyclones’ smothering defense. Iowa State held Iowa to 30 percent shooting and 16 points under its average. The Cyclones forced 22 Hawkeye turnovers.

“We had way too many turnovers to win this game,” Iowa coach Lisa Bluder said.

It’s all part of the plan.

The moment is never too big for Brynn Williamson. The freshman is at her best when the spotlight is brightest.

Williamson provided Iowa State with a much needed lift in Wednesday’s win. It’s not the first time – it’s becoming a habit. She pulled off a similar feat against Drake earlier this season.

“Brynn gave us a huge lift,” Fennelly said. “It’s one of those games where you felt like a couple of free throws, a made layup and you have a working margin.”

When Williamson is on, she can be lethal from outside. With the game in balance, she scored eight quick points to turn a 30-30 nailbiter into a 40-32 lead.

Williamson finished with 11 points against Iowa. The freshman is now averaging 7.1 points per game this season.

More importantly, Wednesday’s game proved she can provide a sudden jolt of energy off the bench for the Cyclones.

Chelsea Poppens is the most consistent Cyclone for a simple reason. She brings an intense attitude every night.

On Wednesday, Poppens narrowly missed her fourth double-double of the season with 10 points and nine rebounds. The junior is averaging 13.6 points and 11.3 rebounds this season.

Poppens gave the crowd a scare when she went down late in the game with an apparent knee injury. She went into the locker room but returned minutes later to watch her teammates close out the win. Fennelly said she should be fine.

–       Bill Fennelly said he doesn’t believe technical fouls can help motivate teams, even if his players disagreed on Wednesday.

–       Coming into Wednesday’s game, Iowa State was eighth in the nation with a +13.7 rebounding margin.

–       Nikki Moody paced the Cyclones with 13 points against Iowa. The freshman added six rebounds, five assists and made all six of her free throws.

–       Center Anna Prins is still getting her legs back after returning from knee surgery. In 10 minutes, the junior scored two points and went 1-of-6 from the field.

–       The Hawkeyes were led in scoring by Morgan Johnson’s 16 points. She scored 12 in the first half, but the Cyclones were able to slow her down after the break.

Tipoff is scheduled for 2 p.m. 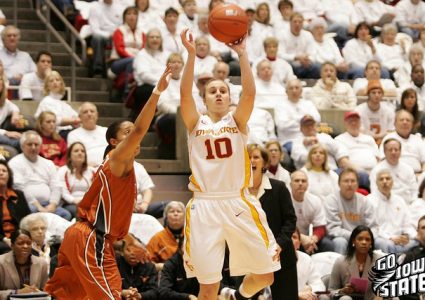