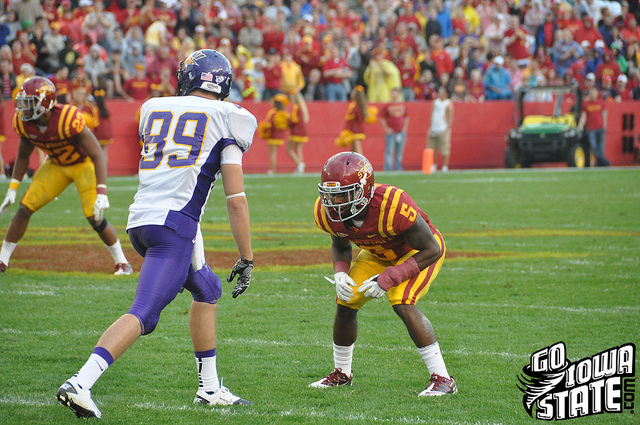 You’ve got a lot of talent, but you’re just too small to play for us.

Jeremy Reeves remembers two schools telling him that back in high school.

Those programs were Texas and Oklahoma.

"The head coach (Mack Brown) came and said that if I was a little bit taller, they would have taken me," said Iowa State’s 5-foot-7, junior starting cornerback. "That’s the case for everybody though so I guess I had to prove everybody wrong."

Reeves, who hails from Allen, Tex., recorded 10 tackles in Iowa State’s 24-20 win over UConn in week three. Luckily for Iowa State, the Longhorns and Sooners passed.

Besides Iowa State, New Mexico was the only program in America that offered Reeves a scholarship.

This little guy with a lot of talent has hardly been a bust for Paul Rhoads’ defensive staff.

"It’s about confidence and believing that I can play against anybody, especially the big wide receivers," said Reeves. "Going against Darius Reynolds every day has helped me a lot."

Don’t expect Reeves to come out and play angry against Texas on Saturday though. He’s passed that.

"I don’t really worry about it too much," said Reeves. "It’s not even on my mind anymore. I wanted to be a Cyclone after I talked to Coach Rhoads. That’s where I’m at right now and that’s what I’m looking forward to."

Williams Blog: Tuberville has fond memories of Rhoads at Auburn