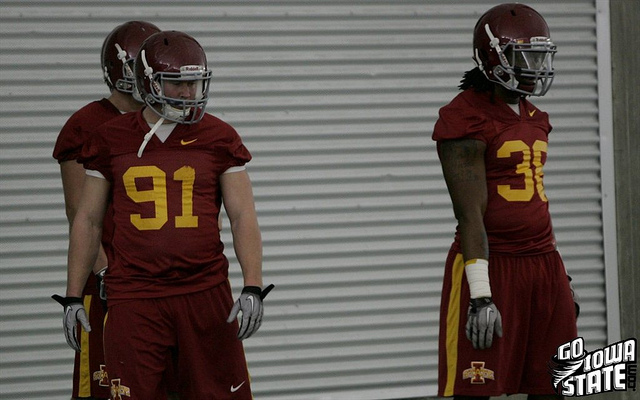 I noticed a fairly significant trend during the 2010 Iowa State football season that had to do with play of the defensive ends.

When Jacob Lattimer became the beast that he is in the Texas win last season, everybody else seemed to get better.

The result of that light popping on inside of Lattimer’s head? Patrick Neal finally looked like a Big 12 player. Roosevelt Maggitt’s (pictured above) productivity skyrocketed. Heck, the effects of this went way beyond the line. A little pressure on the quarterback made everybody from “Dutch” to Leonard Johnson a better football player.

Now ask yourself this question. Were guys like Neal and Maggit better, or were they finally being able to do what they do best?

What’s that? Please keep in mind that Neal is 247-pounds, while Maggitt weighed in at 243 at the beginning of spring drills. That’s an average of 245-pounds going up against 300-plus pound tackles in the Big 12.

No matter who you are (ask Rashawn Parker), when you fight that big of a size disadvantage, you’re going to get gassed in a short amount of time.

When Lattimer showed up, those guys had to play fewer snaps. Their fresh legs showed. Iowa State’s ends are good players when taking less than 30-snaps a game. Go over that and it is a different story.

Depth fanatics. Iowa State needs more of it in 2011.

“We need four or five guys to play,” said Iowa State defensive ends coach Curtis Bray. “That’s what we are working to so we can keep their production up.”

There are other things that Iowa State can do schematically to fight this problem. For instance, the Cyclones can and plan to blitz more this fall.

“It is something that we need to do,” Bray said. “We can fool ourselves all that we want and say that we are going to get four-man pressure a lot but I think that we have to be able to mix it up.”

“There is always a place for four-man pressure and the more you can get it, the better you can be. But I think part of it is getting teams in negative situations, run and pass. We have to be speed orientated. The biggest thing for us is getting off on the football. That has to be a constant.”

Below: Patrick Neal and Roosevelt Maggitt

He has the potential to be a top-end pass rusher in the Big 12. That’s good.

Nelson’s rush defense? Not so good.

“That is probably his biggest downfall,” Bray said. “He has to step up and be a guy who can play for us this year. That is our goal.”

This is just another case where developing depth could do wonders for an individual. Nelson’s weight is currently at 235-pounds. His body simply isn’t ready to play 45 snaps in the heart of a Big 12 schedule.

Expect Iowa State to put Nelson into pass-rushing situations where he can be successful.

“He is really explosive and he is strong, Bray said. “He has the ability to really jump off of the ball. He gains ground and can bend the corner pretty well. He is a powerful athlete.”

“He has to be more consistent and keep learning.”

Due to Big 12 eligibility rules, Nelson was forced to redshirt the 2010 season after arriving in Ames that winter from junior college.

Patrick Neal and Roosevelt Maggitt are currently listed as starters at defensive end on Iowa State’s spring depth chart. Lattimer, who was a Big 12 Defensive Honorable Mention player a season ago, is currently suspended indefinitely due to some legal issues that he had in March. If Lattimer is able to play, it is a slam-dunk that he’ll start.

Neal and Maggitt provide experience and ability. You just learned about Nelson’s progress. What’s behind these guys?

Let’s start with Willie Scott, a 6-foot-2, 215-pound sophomore who like Lattimer, recently moved from linebacker to defensive end.

“He is on course to play some,” Bray said. “I think that he is committed to it (the position change) now. That is always the toughest thing when you move someone down. It is his best opportunity to get on the field. He is having a pretty good spring. He has a chance to make plays for us if not this year, then down the line.” 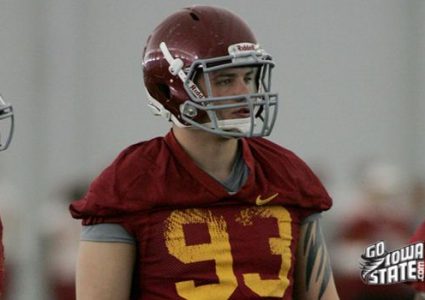 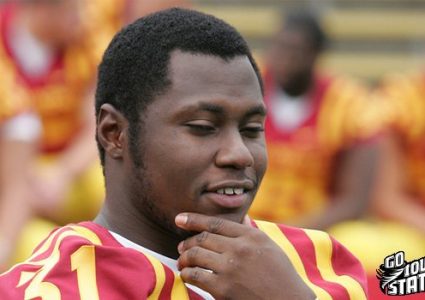