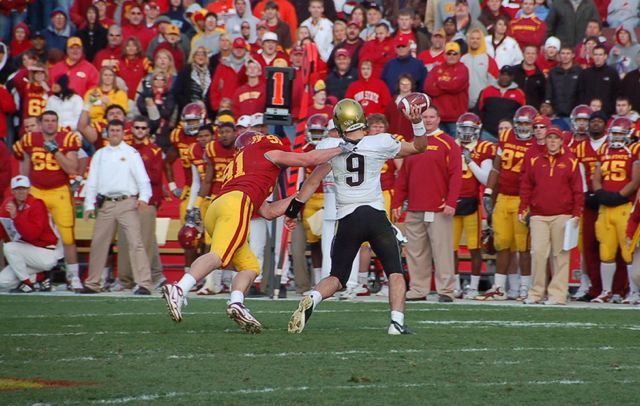 Who in the world will pressure the quarterback for Iowa State this season? We know that Rashawn Parker will be back. That’s a good thing. Parker tore his ACL against Army last season and has been rewarded with another year of eligibility. Barring any setbacks, he’ll start on the right end of the line no matter what when Sept. 2 rolls around.

Pressuring the quarterback is the hot topic right now surrounding this football team. Every radio show I’ve been on has asked me about this. My weekly mailbag routinely has questions about this topic in it.

Paul Rhoads addressed this issue during Tuesday’s press conference. It all began when he was asked if there was a particular young Cyclone that we needed to keep an eye on. Rhoads’ answer? Sophomore Jake McDonough.

“He battled a number of stomach issues a year ago that really hurt his weight gain and ability and his strength gaining,” Rhoads said. “He looks really good. He’s had an excellent offseason. He hasn’t missed things.”

Austin Alburtis is currently listed at number one for the defensive tackle position, ahead of McDonough and senior Taylor Mansfield. It appears that Bailey Johnson has the upper hand over Stephen Ruempolhamer and Jerrod Black at the other interior line position.

It’s that left defensive end position that seems to have Fanatics intrigued. Right now, junior Patrick Neal is the man. As a sophomore, Neal recorded 27 tackles and one sack. Rhoads said that Neal’s work ethic is what puts him above the rest.

As for some other Cyclones who are in the mix, “I also want to see that out of Roosevelt Maggitt and Cleyon Laing,” Rhoads said. “Possibly Aaron Moore and Willie Scott. All of those guys, with their red-shirt years done, you’ll see on the football field. To what extent? They’ll determine that as we go through spring drills.”

“Some of these young players have got to emerge. There is talent within that group but there is very little experience. They’ve got to be like sponges and soak up everything that Coach Burnham and Bray give them.”

As long as this coaching staff is in town, don’t expect to see a Cyclone team that blitzes constantly. Having said that, Iowa State does plan on sending a few more guys more often next season.

“We’ve got to get pressure on the quarterback. We’re not going to be a blitzing football team,” Rhoads said. “We brought very little pressure last year. We’ll bring more and we’ll play more man-coverage this year because I think we’ll have the secondary capable of handling that. But you’ve got to get a pass rush with four guys.”

Of course there is the Rony Nelson factor that goes into this conversation. Nelson, a 6-foot-2, 240-pound defensive end out of Yuba Community College, doesn’t get to participate in spring football due to some transcript issues. He’ll be on the team this fall but let’s all be honest with ourselves for a minute. We shouldn’t sit around counting on Rony Nelson to be the big difference maker for this defense next season. I am approaching Nelson this way. Whatever he brings to the table is one giant bonus. If he’s All-Big 12, phenomenal. If he’s a solid contributor, that’s great. If he doesn’t see the field, do not let that surprise you. Think of him as a bonus. I have this opinion based off of no inside information, but common sense.

Iowa State will at the very least have a little bit of experience coming back at that other defensive end position. Roosevelt Maggitt and Patrick Neal both showed glimpses of being quality Big 12 players last season. In my opinion, Maggitt is the guy who needs to step up. Patrick Neal works hard and that is great. But physically, he doesn’t have Maggitt’s tools. That’s what makes this competition so great. You have your hard worker and very smart player in Neal. Then you have the guy with raw talent in Maggitt. Maggitt has a boatload of upside. That potential now needs to be reached. It is his time to shine. We’ll see how he performs this spring because right now, Neal is the guy and rightfully so.