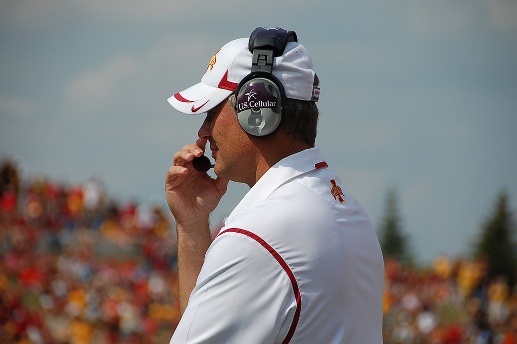 The below is a press release sent out by Iowa State Athletic Communications.

AMES, Iowa – Defensive tackle Henry Simon, a 6-3, 302-pounder, who made 39 tackles at Grossmont (Calif.) College last season, has signed a national letter of intent to attend and play for Iowa State this fall. Simon will join the Cyclones for preseason practice in August.Simon recorded eight tackles for loss and 5 ½ sacks for Grossmont last season. Grossmont finished the 2010 campaign with a 6-4 record in the California community college ranks and a Beach Bowl berth. Simon had six tackles, two for loss in a win over Southwestern College for his head coach, Mike Jordan. Simon also picked off a pass against Mt. Sac and had six tackles and a pair of sacks in a victory over Fullerton.“Bob Elliott had recruited Henry to San Diego State in 2008 so we had an established relationship with Henry,” Iowa State head coach Paul Rhoads said. “I wanted Henry at Iowa State because he is a good fit for our program. Specifically, I was impressed with his character, which will make him a good teammate.”Simon attended Eastlake High School in Chula Vista, Calif. He earned first-team all-league honors as a senior under head coach John McFadden. Simon played both tight end and in the defensive line as a prep. He helped his team advance to the 2007 CIF semifinals, an 8-3 record and a Mesa League title. Simon’s prep team was 8-4 his junior season when he was an honorable mention all-league selection.Simon attended San Diego State during the 2008-09 school year and then sat out a season before going to Grossmont.