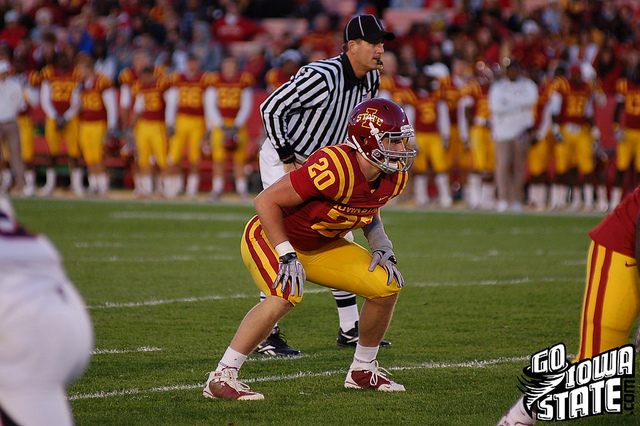 But let’s get hypothetical for a second. Imagine what life would have been like for the Knott family if he hadn’t? Just imagine one of the top linebackers in the Big 12, Jake Knott, lining up against little brother Luke, a quarterback in a Missouri or Kansas jersey.

Things could have gotten ugly folks. One can only imagine that Christmas at the Knott home wouldn’t have been nearly as magical mixing a Tiger and a Cyclone under one roof.

“I don’t know if he would have been allowed back in the house if he would have gone somewhere other than Iowa State,” Jake Knott joked after Iowa State’s Tuesday spring practice. “He made a good choice. I think that it is every big brother’s dream to be able to show your brother the ropes of college.”

Jake confirmed that Luke will come to Iowa State as a quarterback in 2012. Where Luke ends up, whether if it is on offense or defense, it doesn’t really matter.  This is a win-win for big brother.

“He was raw coming out of high school. He was a basketball player,” Elliott said. “He’s really come on this year at junior college. We hope that he can really help us.”

Elliott’s words echoed those of head coach Paul Rhoads in a Monday statement. No bold comments were made about Simon’s ability so keep your expectations in check. Simon could be a project with a high payoff. He could just be a guy who provides depth over the next two years. We’ll find out more in August.

The only guarantee here is that the Iowa State coaching staff anticipates Simon to be quite the teammate.

“Henry is a quiet guy. He is a modest guy,” Elliott said. “The guys on the team are really going to like him.”