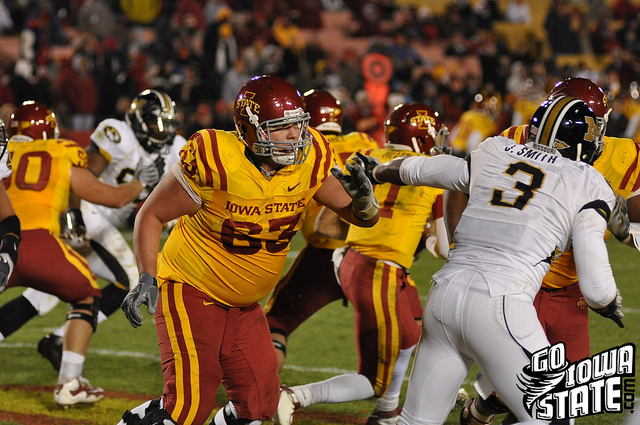 Ames — Hello again Cyclone Fans!  It feels great to be back in Iowa. I arrived back in Ames on Sunday, just in time to watch the Super Bowl.  I never thought I would be saying that I missed Ames, but I actually did.  It’s been great to be back in the Jacobson building and the Bergstrom indoor facility.  I joined Mike O’Connell, Austen Arnaud, Alex Alvarez, Josh Raven and our assistant strength coach, Coach Oyster on Monday.  Coach Oyster has a lot of great knowledge and passion for preparing athletes for Pro Day so I am lucky to have him to work with.  The guys he prepared last year put up great numbers.

I was thinking that for this blog, I would spin it in a different direction and write about something I was thinking about today.  I had finished up my workout and was on the treadmill getting some extra cardio work in as the current football team was in the weight room working out.  I saw them all huddled up as Coach McKnight was giving the guys instructions and I started to think about a lot of things.  It stuck me then and there that I really couldn’t have asked for a better school and coaching staff to play for.  To wear the “Cardinal and Gold” has meant so much to me and I will never forget the experiences I had here.  So I’m just going to share a few experiences about my last few years at Iowa State that really helped me relish what it meant to have “Iowa State” across my chest.

I never really understood what it meant to be “all in”, until about a year or so after Coach Rhoads took over at Iowa State.  I have always been a hard worker and someone who strives to be the best I can be, but it really hit home one winter workout my senior season.  We were doing what we called “mat drills”, which are different agility stations that we are put through, not to mention the hardest workouts we do in the off-season.  We had finished up the drills and you could tell everyone had given up what they had for the team.  From this point on, it wasn’t about playing for yourself, it was about giving it up for your teammates.  To see guys exert so much energy and pain, you could tell who was “all in”.  It’s such a different and rewarding feeling when you stop thinking about yourself and how hard the work you’re putting in is, and then look around at your teammates knowing that you have given it up for them.  We are so privileged to play this game and be in good health that sometimes in my younger years, I forgot what it meant to be “all-in” and to “give it up”, as Coach Rhoads would put it.  From that point on, I truly understood what that term “all-in” meant and it is still engraved in my brain today.

Senior night was a night that I never thought was going to come.  Starting as a redshirt freshman, I thought being a senior would never come.  You always hear alumni say that it always goes by faster than you think.  Well I have to admit that they sure are right.  Senior night was such a whirlwind of emotions.  I was trying not to think about it the morning of the game, but it was inevitable.  It was a different feeling to be in that locker room for the last time.  We knew that we had to win the game in order to be eligible for a bowl game.  We kept saying that week that if we win, were in.  Strapping on the pads and the cleats for possibly the last time was such a weird feeling.  It started to get really emotional for me when all of the seniors were getting ready to be announced and take Jack Trice for the final time.  It was my turn to be announced and I couldn’t hold back the tears when I hugged Coach Rhoads.  Playing for Iowa State and Coach Rhoads meant so much to me that my emotions were flowing at an all-time high.  I remember walking out of the tunnel of past players with tears running down my face.  It was such a different feeling to take that field one last time because my heart was attached to Iowa State.  We played our hearts out that game, but unfortunately came up short.  Sitting there on the sideline knowing I would never put on an Iowa State uniform really started to set in.  The locker room after the game was very emotional.  I remember hugging all the coaches, seniors and some of the underclassmen and tears were still flowing.  When you put in so much work and spend so much time into something, it was hard to see it end.  I think about this everyday of my life and I can honestly say I wouldn’t trade in playing at Iowa State and wearing the cardinal and gold for anything else.

These two stories, if you will, are just two that came to mind when I was watching the current football team workout.  It was such an incredible experience to play at this university and for Coach Rhoads.  It was such a rewarding experience to play for a program and a coach who is so passionate and caring.  That definitely was a spin on my previous blogs, but I thought I would just share a few stories and personal experiences with you guys.  Thanks again for reading this. It means a lot to me.  GO CYCLONES!!!