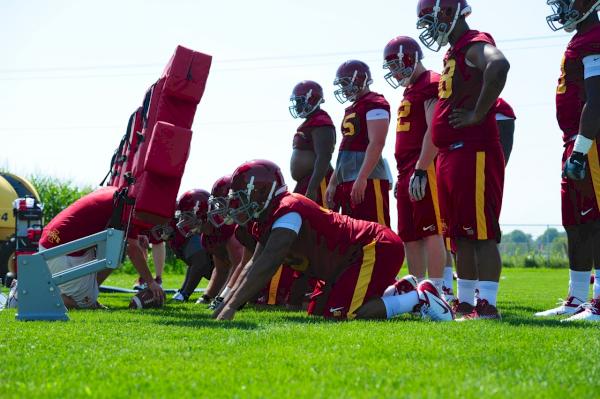 The word “depth” gets tossed around quite a bit when talking Iowa State football.

At a school like Iowa State – specifically on the defensive line – it has to be there. History tells us that the Nick Fairley’s and Ndamukong Suh’s of the world don’t play college football in Ames. And that’s okay. But programs like this have to have depth.

During his Monday press conference, Paul Rhoads was asked about depth on the defensive line. How deep will the Cyclones go in 2012?

Rhoads’ answer intrigued me. He pointed out a positive to playing more guys that I hadn’t ever really thought about before. There’s more to it than fresh bodies on the field.

That makes a lot of sense if you think about it. When you reward a guy with playing time, he’s more likely to show up with a positive attitude all week long. Practice makes perfect right? Competition breeds success.

Players have to earn playing time though.

“We think all of these guys can be productive,” said Rhoads. “Otherwise we wouldn’t put them out there whether it was the opener, the sixth game or the 12thgame.”

Iowa State saw this depth grow throughout the course of the 2011 campaign. By the end of the season, the Cyclones were rolling up to 10 or 11 bodies out per game on the defensive line. How high will that number be in 2012? Rhoads didn’t give specifics but reaching double-digits on Saturday against Tulsa wouldn’t be a big surprise. And that’s a good thing for the future of Iowa State football.