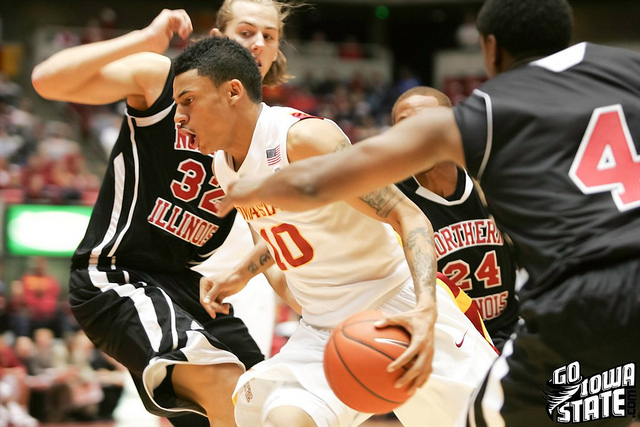 Remember to tune into the season premier of the CycloneFanatic.com/Wilson Toyota of Ames Iowa State men’s basketball post game show Saturday night on Des Moines’ Sports Station, 1460 KXNO and www.KXNO.com. We’ll post a link here on the front page for you all to tune in. Tron Smith and I will be broadcasting live from Es Tas Bar and Grill in Ames.

Iowa State and Nebraska have a combined record of 25-4 heading into Saturday night’s Big 12 opener in Lincoln. Both teams have been pleasant surprises during non-conference play but neither has played much of a schedule to this point.

Who will have the edge come tip time? Let’s break it down.

Is Scott Christopherson healthy? Regardless of the type of progress Christopherson sees between Thursday afternoon’s media session and Saturday night, Iowa State’s second leading scorer will not be 100 percent in this ball game. I bet that he plays thought. Christopherson played with mono throughout most of the 2009-10 season. He’s a tough guy. Christopherson has had five days off to rest his bruised elbow. I think that he’ll play. But can he shoot? That’s the real question.

Rebounding is key for confident Cyclones

I don’t care who they have played. Iowa State’s 13-2 non-conference mark is impressive; especially when you consider the fact that last year’s talent rich squad only won 15 contests. Road wins over Iowa and Virginia proved that this team can take care of business on the road and despite their 12-2 record, I don’t believe that Nebraska is much better than either of those programs.

Iowa State’s 13-2 start was a bit annoying too if you think about it. Fred Hoiberg has mentioned numerous times that the very thought of those games keeps him up at night. Scott Christopherson feels the same way.

“To be honest with you, I thought we played really poorly against Northern Iowa and we had opportunities to beat California,” Christopherson said. “I mean, I’m happy we’re 13-2 and had some good performances. But looking back on it, a few possessions here and a few possessions there and we could be 15-0.”

“I’m happy with where we are,” Hoiberg said. “Guys are playing with a tremendous amount of confidence. We need to continue to do that and even take a step up if we want to accomplish our goals and do what we want to do, you got to take it up to the next level.”

Speaking of taking things up a notch, Iowa State needs to do that as far as rebounding goes vs. the Huskers. Nebraska currently has a +6.9 rebounding over their opponents, a number that ranks them sixth in the Big 12. But again, when you’re going up against the Grambling’s of the world, stats are easy to compile.

Northern Illinois out-rebounded the Cyclones 51-41 last Monday night but keep in mind that Iowa State’s lineup was depleted without Christopherson and Jordan Railey. On top of that, Jake Anderson was stuck like glue to NIU standout Xavier Silas. His focus was on stopping that one player, not being the Windex man.

There’s no question that Nebraska’s bulky front line will be a challenge for the Cyclones.

“They have two 7-footers that they throw out there, that are big, and physical and strong,” Hoiberg said. “If we don’t get a body on them, it’s going to be a long night for us.”

“We need to do a good job with ball movement, try to get transition baskets, try and get baskets before the defense gets set,” Hoiberg said. “It’s important to get that done against a team that’s as sound defensively as they are.”

BREAKING DOWN THE HUSKERS

Statistically, Nebraska is the second best defensive basketball team in America. Opponents are averaging 52.9 points per game against the Huskers. Six times this season, Nebraska has held teams below 50 points.

“Coach Fred mentioned a lot of teams were held to under 50 points,” Diante Garrett said. “If we can just get out and run our offense and play our game, I think we can score more than 50. We shoot a lot of 3’s and get a lot of buckets in transition. If we stick to our game plan, I think it will help us out.”

“Nebraska is as good as a defensive team as anybody in the nation,” Hoiberg said. “Their last four opponents have been held under 50. They have a 10 game winning streak with nobody scoring over 60.”

Nebraska still hasn’t played a true road game this season. Their two losses came to Vanderbilt and Davidson on neutral courts. The Cyclones and the Huskers have played one common non-conference opponent. Both teams defeated Greg McDermott’s Creighton Bluejays.

The big difference between last year’s Nebraska team that went 2-14 in league play and this roster is experience.

“I thought that we played pretty well last year in the league. We just didn’t win,” said Doc Sadler in his weekly Big 12 teleconference. “We were playing so many guys that had never been through league play. Basically at times, we had four or five guys on the floor who had never been through it. We did take some lumps. The good news is that they all came back.”

Everybody except Christian Standhardinger that is. Sadler and the Huskers got Lucca’d in late December when Standhardinger, who was averaging 9.5 points and 5.5 rebounds, elected to leave the team to play professionally overseas.

This one is a total toss-up in my opinion. I think that Scott Christopherson will play but not at 100 percent.

Vegas has tabbed Nebraska as a three-point favorite in this contest and KenPom.com projects a five-point Husker victory.

I’m going to cut against the grain. Both have been somewhat surprising, but neither one of these basketball teams has what I would call and impressive resume. However, if you place them next to each other, Iowa State’s is better. Iowa State has better guards. Nebraska is stronger down low. Give me the guards and a confident Iowa State team.

The Breakdown: Iowa State vs. Nebraska