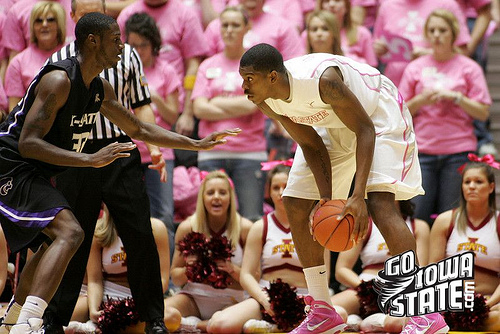 The Cyclones stole one in Lincoln on Jan. 16. Will Iowa State pick up its third Big 12 win of the season tonight?

Breaking down the Huskers

Nebraska is on a six-game losing streak entering tonight’s game. In their last time out, the Huskers lost to Missouri 74-59.

Still, if you look at scores alone, Nebraska seems to be improving. The Huskers had top-ranked Kansas on the ropes, in Lawrence, on Feb. 6. Baylor came into Lincoln and survived with a close two-point win shortly after that. On Feb. 17, Nebraska went on the road and only lost to Kansas State by four.

That is one side of the argument. Then, the Huskers have had games like Saturday’s effort against Missouri. What about Texas’ 40-point spanking of Nebraska on Feb. 13?

What Husker team will we see tonight? That is a tossup.

Without a doubt, senior Ryan Anderson is Nebraska’s best player. Anderson has gone 11-of-15 from 3-point range over Nebraska’s last two contests. The last time these two teams met, Anderson led all Huskers with 13 points. Lance Jeter was also in double figures with 12.

Nebraska will be a little bit short-handed tonight. Yesterday, Doc Sadler announced that he has suspended guard Eshaunte Jones and forward Quincy Hankins-Cole for academic purposes.

As I pointed out earlier this week, Iowa State is doing everything better than they were earlier in the Big 12 season. The Cyclones just haven’t found a way to win.

What is the key for tonight?

Marquis Gilstrap or Craig Brackins needs to step. Just one of them. Those are Iowa State’s marquee guys. While Scott Christopherson and Justin Hamilton are fine role players, they cannot be asked to win Big 12 basketball games alone.

Gilstrap and Brackins combined to go 13-for-57 from the field in their past two games. Even though it is only Nebraska, one of those guys needs to produce tonight in order for Iowa State to stay out of the Big 12’s cellar.

I look for Gilstrap to be that man. As Greg McDermott pointed out on Monday, without Lucca Staiger in the lineup, Nebraska will pack it in and make things very hard on Brackins, giving Gilstrap the opportunity to have a big night. That’s just what they do. The Huskers have kept Craig in check during his career for the most part. Brackins is only averaging 13.2 points in his five games against the Huskers.

I really feel like Iowa State will finally hit some shots tonight. Let’s hope that 5-of-20 3-point shooting is a thing of the past. If it is and Iowa State gets some production out of one of the two stars, this should be a fun night for Cyclone fans.