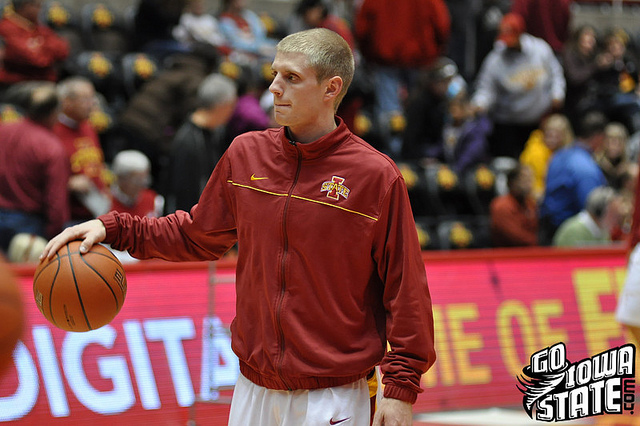 Scott Christopherson is doing everything he can to play.

Unfortunately for Iowa State, it still might not be enough. Right now, Christopherson is questionable to play at Nebraska when the Cyclones open Big 12 play on Saturday night.

“I’m hoping (to play Saturday),” Christopherson said. “At this point, I’m taking it day-by-day and seeing what I can do.”

Christopherson has been able to do ball-handling and defensive drills, but shooting is still a challenge. On Thursday, he was able to shoot from about 15 feet comfortably, Iowa State coach Fred Hoiberg said.

The junior is wearing a compression sleeve on his right, injured elbow and said he plans to for at least the next few weeks.

“Right now, everything feels a little funny when I try to shoot because I can’t extend my elbow all the way,” Christopherson said. “Once the swelling gets out of my elbow, I don’t see the sleeve affecting my shot very much.”

How much Christopherson means to Iowa State can’t be overstated. The LaCrosse, Wisc. native is leading the Big 12 with 3.3 3-pointers per game and averages 15.1 points. The Cyclones struggled to beat Northern Illinois, 72-63, on Monday without Christopherson in the lineup.

So what’s it going to take to see him out there on Saturday night?

“I just want to continue to see him improve,” Hoiberg said. “He went through some drills (Thursday). We still want to limit him as far as shooting the ball. Hopefully, he will continue to make improvements over the next two days.”

Fred Hoiberg is used to big conference games from his playing days, but Saturday night’s matchup with Cornhuskers will be extra special. Hoiberg’s grandfather, Jerry Bush, was the head coach at Nebraska from 1955-63 and was inducted into the Nebraska hall of fame in 1991.

Not only that, the Iowa State head coach was also born in Lincoln.

“It is a special game for me,” Hoiberg said. “I’ll have 30 plus family members there. My parents both went there. My grandfather coached there for nine years in the 50s and 60s. And it was where I was born. I’m very excited about going back there and walking the sidelines of where my grandfather coached a long time ago.”

As a player, Hoiberg went 3-5 against the Cornhuskers, averaging 17.3 points and 5.8 rebounds per game.

After cramping up against Northern Illinois, Jake Anderson is doing his best to prevent that from happening again. Not only is he drinking more fluids, he is taking in more salt.

“I’m eating salt tablets, salty fries, potato chips,” Anderson joked. “I’m just trying to find a way to get this out of the way.

Hoiberg said Anderson was limited in practice on Thursday, but the senior said he should be good to go on Saturday.

Freshman Jordan Railey was suspended for two games after violating team rules. Railey will be eligible to play again on Wednesday when Iowa State hosts Kansas.

Here’s what Hoiberg had to say about the suspension on Thursday.

“We’re still gathering information on it,” Hoiberg said. “At this time, we feel like it’s an appropriate suspension.”

–          Jamie Vanderbeken is making his presence felt around the hoop. The senior leads the Big 12 with 2.3 blocks per game after tallying six blocks against Northern Illinois.

Stay tuned to CycloneFanatic.com on Friday for a complete preview of Iowa State’s Big 12 opener at Nebraska.