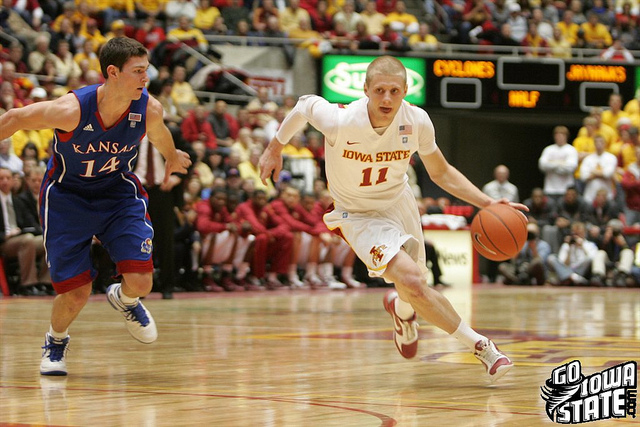 The Iowa State men’s basketball team improved to 14-4 (1-2) on Saturday night with a 72-57 win over the Baylor Bears. Below are some notes/thoughts on the big win!

Big Shot Scott was back and ready to rumble on Saturday night in Ames. The junior bounced back and went 5-of-8 from 3-point range and scored 17 points. Other Cyclones scored more in the game. For instance, Jamie Vanderbeken went nuts (we’ll get to him in Three Up) to drop 24 on Baylor. Iowa State wouldn’t have won without Diante Garrett’s 16 points and 11 assists.  But mad props go out to Christopherson, who has been fighting a lingering elbow injury ever since the Virginia game in late December.

Bench Production – Iowa State’s bench scored nine points to Baylor’s zero. Calvin Godfrey played his best game in an Iowa State uniform by chipping in all nine of those points and seven rebounds in 18 minutes of action. Bubu Palo defensively contributed to an Iowa State run late in the first half. It was good to see some much-needed production outside of the starting five.

Garrett & Vanderbeken – Really, both of these guys could have taken home the “Player of the Game” hardware. It was a total team victory. Garrett was awesome with 16 points and 11 assists (to only five turnovers). Vanderbeken was just ridiculous by going 7-of-8 from 3-point range and leading Iowa State with 21 points.

"It was one of those nights," Vanderbeken said after the game.

The season – With a healthy Scott Christopherson, every game on Iowa State’s Big 12 schedule is winnable. The Cyclones nearly beat Kansas with an injured Christopherson. He appeared to be healthy on Saturday night and Iowa State blew out a team that was in last year’s Elite Eight. There is no doubt that things are heading in the right direction for Iowa State’s basketball program.

Me – I picked Baylor to win this thing! As of now, I am taking volunteers to write Wednesday’s “Breakdown” for the Oklahoma State game. Who is in?

Baylor’s slop – The Des Moines Register’s Sean Keeler summed things up best when he compared the Bears to an “AAU team” in a tweet that he sent out during the game. I can’t add much more to that. It is spot on.