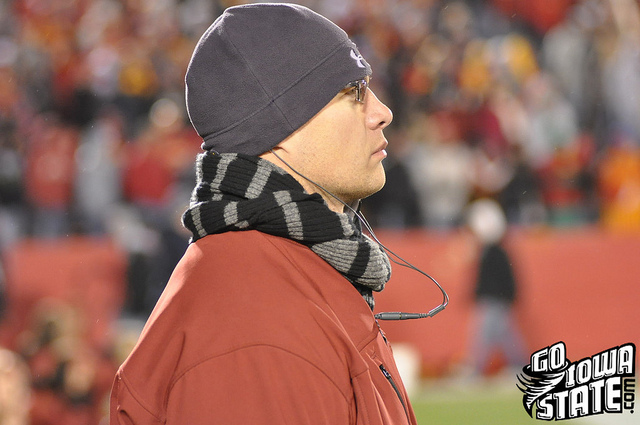 Football season is always a long one for me, from the time I was playing until now. The stress of the season takes its toll, though these days it’s merely mental for my family and me. Coaching, work and travel with the Cyclones leave me burned out by Thanksgiving.

This year feels somewhat strange though. For all the effort that everyone puts into the season…the injuries our guys deal with, the emotions our players and fans feel when things aren’t going well and the continual stress of coaching a football team, this one seems to have just slipped by. “Slipped” is the right word, too, because this baby would still be going if KSU or Nebraska hadn’t slipped out of our hands.

I just can’t help thinking to myself: How can it be over this soon?

The seniors who hung up their pads on Saturday night for the last time – the ones with tears streaming from their eyes on the field after playing their damn guts out – are asking themselves the same question. Their careers feel like they slipped by in the blink of an eye. It is amazing that a group of guys that had three different coaches could feel like it was over in an instant, but it’s true. They endured a winter from hell in which Chizik was trying to run everyone out of the program. They survived and thrived when Rhoads brought the concept of mental toughness to his first winter conditioning. They did themselves proud last year – and again this year. They are a great group of Cyclones that will never put on the Cardinal & Gold again. That’s the fact that made Paul Rhoads say publicly that the hardest locker room he’s ever closed the door on was the one everyone left Saturday in Ames.

Our margin for error on Saturday was so small. The Missouri defense has somehow evolved into a group that made Oklahoma look human on a crisp night in Columbia. The Tigers lived up to that billing on Saturday night, but they also got a little help from the Cyclone offense – specifically the field goal unit and younger receivers.

ISU’s defense was LIGHTS OUT on Saturday. To hold Mizzou to 14 points in a flawlessly executed game is simply incredible. There is no way to put into words how good the game plan was. The Cyclones took away the run and then set about holding the Tigers to season lows in passing and points.

The result of the game left our team, which clearly expected to walk of the field with a victory until the last seconds ticked off the clock, feeling hollow. The good news is: That feeling will pass. In time, this group will look back at all it has accomplished and the pain will rightly fade away. These guys played like warriors and moved our cause forward.

So that brings me to the future. Iowa State is headed for a crossroads. We have to make a choice, so here are the facts as I see them:

– Returning on ISU’s defense is a great linebacking corps, including what I think will be the best one-two punch in the conference with A.J. Klein and Jake Knott. I strongly agree with this post on the subject: CLICK HERE to check it out.

– Leonard Johnson has a chance to be an All-Big 12 performer next season as well.

– Kelechi Osemele should be the best guard in the Big 12 next year if two things happen: 1) He gets moved inside because of better depth/development at tackle; and 2) He learns how to become a beast in the weight room. Hopefully KO is motivated by what was, in my opinion, a disappointing season for him.

– Young talent in the offensive line is about to start showing up on the field, as is a group of exciting running backs.

– A defensive line-heavy recruiting class will start to pay off some this season, with even more of an impact two years from now.

– Our coaching staff has put together fantastic game plans that were executed almost flawlessly in eight of our 12 games this season.

– Our quarterback situation heading into year three of Coach Rhoads’ tenure would appear as though it still doesn’t have the operator we need to run Herman’s system with a high rate of efficiency. I love the fact that Tiller & Co. are going to do everything it takes to prove me wrong…I’d love to be wrong.

– Our wide receiving core’s two most productive members – Jake Williams and Collin Franklin – are leaving. Our returning guys need extensive upgrades in the weight room to become much better blockers than they are currently are. Further, we need a group that will catch anything and will adjust to the football in the air…based on what happened this fall, it seems that those left on the roster are a long way from that.

– Paul Rhoads is the 11thhighest paid coach in the league. Thankfully he wants to stay and build a championship level program – that is, if he gets the support needed in attendance and facilities to get us there.

– Our stadium is the eighth largest in the current Big 12, with 2010 home attendance ranking 10th.

So where do we go from here? Paul Rhoads’ call to our football team this year was “All In.” If you’re reading this, chances are good you too feel like you’re “All In.”

If the recession hasn’t hit you too hard, buying season tickets is the way to be “All In.” I’ve got tickets for pretty much every sport you can buy them for and give at a level that already feels a little uncomfortable. Still, I know I’m not doing enough and I intend to step it up. If you farm, that’s cool. I understand that means you would have trouble using season tickets. Consider buying them anyway and giving the ones you can’t use to your local youth ministries or Boys & Girls Clubs.

We have a coach in place who can beat the best teams in the country year in and year out. We have players who need to be spoken about in the sense that they are the best in their respective positions in the country and we need to speak about them in that fashion. We haven’t had an All-America selection in 10 years and haven’t had a consensus guy since Troy Davis in 1996. We’ve had guys who should have been considered more than they were (one was hurt badly Sunday night – say a prayer for him if you would: http://www.bellinghamherald.com/2010/11/22/1734802/hobbs-out-for-season-agent-says.html). We Cyclones just don’t do a great job of tooting our own horn.

Our house is gonna be rockin’ next year with a team of players who killed themselves in the offseason to compete for a title shot in the reborn Big 12. I hope we will all answer the call when Paul and Jamie come-a-knockin’ after the first of the year.

We’re on the edge of something awesome if we’ll just grab it…and you and I are an important part of the equation. Enough with the talk about more with less; it’s time for more with more.

Then let’s enjoy it together. 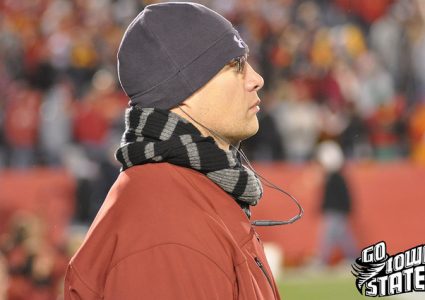